Party platforms, which
usually run over 40 pages, are not the sexiest of materials to go through, but
they do offer great insights on the baseline positions that the candidates will
fight for if they win office.

Below are the positions of Republicans and
Democrats on issues that either directly affect the Asian American and Pacific
Islander (AAPI) community, or cover bread and butter issues that AAPIs tend to
care most about.

Republicans: “In an age of
terrorism, drug cartels, human trafficking, and criminal gangs, the presence of
millions of unidentified persons in this country poses grave risks to the
safety and the sovereignty of the United States.”

Republicans are taking a
hardline stance on immigrants who do not have legal documentation. They want to
make it mandatory for employers to check the immigration status of new hires,
impose tough penalties for forged documentation, and allow state and local
police to check the immigration status of anyone they stop. In addition, anyone
who transports or harbors an undocumented immigrant will be committing a crime.
For Republicans, the solution to the 12 million undocumented immigrants is,
vaguely, to implement “humane procedures to encourage illegal aliens to return
home voluntarily.”

Democrats: “The country
urgently needs comprehensive immigration reform that brings undocumented
immigrants out of the shadows and requires them to get right with the law,
learn English, and pay taxes in order to get on a path to earn citizenship.”

Democrats support a process
for undocumented immigrants currently in the US to eventually earn citizenship.
President Barack Obama gave a reprieve from deportation and work permits to
undocumented immigrants who came to the US at a young age. Democrats place
focus on deporting those who have committed a crime, but want to offer a path
to college and citizenship for those who are not dangerous and want to
contribute to society. However, not much emphasis is placed on enforcement, and
there is no mention that President Barack Obama actually deported undocumented
immigrants at monthly rate that was 1.5 times higher than President George W.
Bush.

Verdict: Most AAPIs
will agree that life will be much harder for undocumented family members and
friends if Republicans win. To his credit, Mitt Romney has proposed expediting
visas so that those who want to come to the US legally can do so more easily.
But regardless, Republicans ignore a viable solution for the 12 million
undocumented immigrants already in the US, keeping them in the shadows with no
legally viable way to become productive members of society. In addition,
comparing undocumented immigrants to criminals may inadvertently increase
racial profiling.

Republicans: “Voter fraud is
political poison. It strikes at the heart of representative government. We call
on every citizen, elected official, and member of the judiciary to preserve the
integrity of the vote.”

Republicans support state
efforts to mandate voters show photo identification to get a ballot.
Republicans also support state laws that ask for proof of citizenship when
registering to vote. Finally, they want the US Census to count undocumented
immigrants so they can be factored out when apportioning seats in state and
federal legislatures.

Democrats: “We believe the
right to vote and to have your vote counted is an essential American freedom,
and we oppose laws that place unnecessary restrictions on those seeking to
exercise that freedom.”

Democrats oppose voter identification laws, claiming they disenfranchise those
who tend to not have government issued IDs: young voters, people of color,
low-income families, people with disabilities, and the elderly.

Verdict: Statistics
have shown that the groups mentioned by the Democratic Party do indeed have
government-issued photo IDs at lower rates than the national average.
Republican-supported voter ID laws are only fair if efforts are made to make it
easy and free to obtain photo IDs. Voter ID laws could harm low-income AAPIs
who cannot get IDs, as well as those who do not read English, and therefore
would have no idea that the rules have changed on them. So states that want to
enact stricter voter ID laws must address these issues. However, because the
photo ID requirement is a somewhat new phenomenon, no studies have been done to
conclusively show that a voter ID law decreases AAPI turnout.

Republicans: “We do not
believe in a one size fits all approach to education and support providing
broad education choices to parents and children at the state and local level.”

Republican education
proposals are focused on school choice, allowing parents to choose a new school
for their child if they are unsatisfied with the current school. Options
mentioned in the platform include charter schools, open enrollment requests,
college lab schools, virtual schools, career and technical education programs,
vouchers, and tax credits. Republicans propose performance-based pay for
teachers, and directly criticize some teachers unions for putting their needs
ahead of students. Republicans seem to be pre-empting budget cuts by
emphasizing that spending more money is not the solution to raising education
outcomes. On higher education, Republicans want to privatize federal student
loans.

Democrats: “If we want
high-quality education for all our kids, we must listen to the people who are
on the front lines.”

Although Democratic
proposals also include school choice, Democrats place more emphasis on turning
around struggling public schools and working with teachers. They seek to
prevent teacher layoffs in tough economic times. They do support
performance-based pay, but use softer language such as “rewarding good
teaching” and “give struggling teachers a chance to succeed.” Democrats also
plan to increase education spending by doubling the government’s key investment
in training scientists and math and science teachers. On higher education,
Democrats want to cut out private banks in the federal student loan process and
keep interest rates low.

Verdict: Democrats and
Republicans agree on having more school choice and performance-based pay, but
are playing to their bases when they touch on teachers’ unions. For AAPI
parents, both ideas offer more flexibility to helping their kids achieve a good
education. On the student loan issue, low-income AAPIs will need more financing
to pay for rising cost of college and graduate school. Republicans argue that
privatization would increase competition and lower interest rates, but private
loans already exist, and their rates are not as low as the taxpayer subsidized
rates offered by the Federal government. If Republicans are worried that
students are taking out loans for low-quality education programs, it sounds
like what these students need is better career and loan counseling, and not
higher interest rates.

Republicans: “We will
strongly enforce antidiscrimination statutes and ask all to join us in
rejecting the forces of hatred and bigotry and in denouncing all who practice
or promote racism.”

Interestingly enough,
Republicans want to ban aerial surveillance within the US in order to protect
privacy of its citizens and residents. Racial profiling was not mentioned in
their platform.

Democrats: “We are committed
to equal opportunity for all Americans and to making sure that every American
is treated equally under the law.”

Democrats have specified
that they will combat racial profiling. As for counter-terrorism, they have
promised not to infringe on the privacy and civil liberties of individuals, but
approve of the use of technology to fight crime. Specific proposals on privacy
were not mentioned in the platform, except for internet privacy.

Verdict: Both parties
claim to be against discrimination and racial profiling. Republicans surprised
with a promise to ban aerial surveillance. This is a good sign for Muslim and
South Asian communities, which have suffered increased law enforcement
surveillance since September 11, 2001. We hope the GOP can clamp down on anti-Muslim
elements within their party and fulfill their pledge of privacy for all
Americans.

Republicans: “Merit,
ability, aptitude, and results should be the factors that determine advancement
in our society.”

Republicans want to remove
the use of affirmative action (preferences, quotas, or set-asides) as tool for
promoting fair access to opportunities in government, education, and corporate
board rooms. They vaguely support “efforts to help low-income individuals get a
fair chance based on their potential and individual merit,” but offer no
specifics on what kind of efforts they have in mind.

Democrats: “To enhance
access and equity in employment, education, and business opportunities, we
encourage initiatives to remove barriers to equal opportunity that still exist
in America.”

The Democratic platform
makes no mention of affirmative action.

Verdict: Affirmative
action has been relentlessly attacked for more than a decade in US courts, and
many university affirmative action policies have been dismantled or changed as
a result. AAPIs are split on this issue, with some having benefited from
affirmative action while others have not. The mere fact that Democrats are no
longer in outright support of affirmative action suggests that they think
it’s now a political risk to advocate for preferences based on race.

Lin Yang is the political editor for Hyphen
magazine. He has a masters degree in public policy from Harvard University. 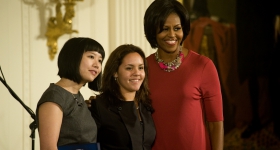 LTE wrote on Sat, 09/08/2012 - 10:27am
I have found it striking the little attention that has been paid to the ballooning federal deficit. . Growing at a rapid rate and with few serious attempts to control it, the deficit should be at the top of the list of both parties. Failure to address the deficit can cause a radical altering of life in America. . Obama seems to live in denial and Romney/Ryan are not explaining the consequences of letting the federal debt build up. Paul Ryan is one of the few in Congress that has gone through the federal budget line by line (he has no life either) and has given talks about what he has found to think tanks but rarely to the general public. . It's not a sexy subject but it's importance surpasses ANY of the issues mentioned above.
Realist wrote on Mon, 09/10/2012 - 10:33am
Regardless of how we feel about having family members or friends who might be undocumented workers. Illegal is illegal. If you don't go through the process its like cutting in front of the line at a Disneyland ride. Don't tell me its different. Its the same thing. The same people you have as family or friends who go through the legal process get gyped if you accommodation the ones who sneaked in or stayed over their visas. Don't say that its different from our home countries. Japan has one of the strictest immigration policies yet no one complains about their country when it comes to deportations. Majority of the Asian ethnicity who come to the states has one of the highest in all minorities in regards to making sure we go through the legal process. Supporting Republican ideology makes sense for our future. Is it right for us Asian-Americans who work hard and go through the legal process to be cut in front of the line by others who think they deserve to be Americans too? Its not about entitlement its about privilege. We aren't Hispanics or Spanish-speaking population of South America... we are Asian-Americans... lets remember that we succeed because we follow the rules and work hard. WE don't take shortcuts in life. Yes, some of us do, but that doesn't mean we have to support the minority so they can become American. Ask our home countries how they feel about Open Borders and Illegal Immigration before we ask the country we are in to do the same.