let your kids go to the movies!

it's true that fresh air is good for the body


but what about the soul

that grows in darkness, embossed by silvery
images.

A love of storytelling is my only religion. But like a good
Catholic whose humanity means they’ll inevitably sin between each reaffirming
Sunday mass, I’ve come to realize that this love I always assumed was flawless,
was never as absolute as I believed.

First I have to explain why books, movies, television, and
even radio, are so important -- why they are the source of all my faith. I
realize that in so many of their incarnations, stories have the capacity to
make people feel less alone, and to foster a profound sense of empathy. When I
was a teenager it was The Breakfast Club. Did I think of myself as a
geek, jock, princess, rebel, or basket case? Not really. But the movie seemed
to validate the aching isolation I felt. It was like a weight had been lifted
off my shoulders when I came to the realization that childhood didn’t
immediately lead to adulthood, and that there was a space in between meant to
be fraught with confusion and contradiction. And nowadays, when I watch Mad
Men or The West Wing, I can relate to one man who is a chain smoking
philanderer, and another who is president of the United States, simply because
we’re all trying to create something, to find our places in the world.

But I began to realize, quite ironically, that the quest for
empathy and imagination I thought I was cultivating through narrative was
making me judgmental about the kinds of stories I was willing to watch or read.
I’m not saying a person can’t be discerning and prefer Breaking Bad  to
the Real
Housewives, but I was taking things a step further by creating
rules for myself about what constituted good and bad storytelling, and while
holding fast to them, was writing off countless opportunities to acquire a new
perspective.

And the number one victim of this mentality? Bollywood.

To be fair, I have seen my fair share of Hindi films, and
with a production rate of nearly 800 a year there are plenty to pick from. The
endless reasons why I don’t like these movies include blatant plagiarism, a
simultaneous pandering towards and disdain for American modernity, and
humiliating sexism.

Then I remembered one of my heroes, Sister Wendy Beckett. This
Oxford educated, bespectacled emissary from God is a Catholic nun and art lover
who travels the globe, habit and all, making videos about art history. (Her DVD
collection, the aptly named “Story of Painting,” is essential for anyone who
wants to learn about art.) What I remembered was her response to a question
that asked how she, as a Catholic nun whose faith and experience lends itself
to Christian art, can find beauty in work based on other religions.

Well, all great religions are great because they're based
upon the longings of the human heart. Essentially what the Buddha taught Jesus
taught, as far as moral conduct goes. The intricacies of theology are not
usually what concerns the artist. They're concerned with the big, beautiful
fundamentals, and there I have never had any problem. In fact, anybody who has
a narrow sense of their religion, whether they're Jew or Christian or Muslim or
whatever, has only to look long and intelligently at the great work of another
tradition and they will see what the religions have in common.

Was I being narrow minded about my self-prescribed religion? Was I
missing out on the big, beautiful fundamentals of storytelling that transcend
culture? When I thought about it, I realized I had been criticizing qualities
that, in some form or another, run rampant in American film as well. I could
still hate the Indian versions of those qualities more, but maybe I needed to
assume that if the things I hated existed in both spheres, the things I loved
could also. So I finally sat down to watch my mother’s favorite movie, Sholay. Sholay, set in a village in 1970s
in India, is a story about a former policeman who enlists the help of two outlaws to help him catch the man who murdered his family. The movie is
about friendship, loyalty, love, and the notion that society and community are
meant to liberate us from isolation, not force us, through judgment, to succumb
to it. Most of all, it was about seeking justice when vengeance is the easier
option.

The heroes, Veeru and Jai, had resplendent chest hair,
hideous outfits -- and effortless swagger. I found them sexy despite myself.
And what a glorious villain. A man so evil that parents threaten their
misbehaving children with his name, a real live bogeyman who is so capricious
that both his victims and his henchmen walk on eggshells in fear. Throughout
the movie the tragedy was palpable, the comedy clever but sometimes
unintentional, and the dialogue poetic but sometimes filled with moral
platitudes. The women were brave and funny, though often two dimensional. But
at the end of the day the ideas that resonated also exist in some of my
favorite stories -- in movies like The Dark Knight and plays like Julius
Cesar. They are about the pursuit of a complicated kind of justice, about dark,
flawed people who have every reason not to take the moral high ground, but
painfully do so anyways.

I know myself well enough to assume that the next time my
mother asks me to watch a Hindi movie with her, I’ll probably fail my religion
once more and say no. This isn't the dawn of faith's perfection. But hopefully,
from time to time, I’ll remind myself to be a little better. 'Til next Sunday,
then. 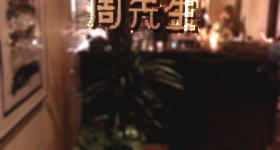 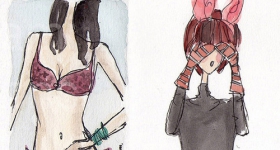 Anonymous wrote on Fri, 01/13/2012 - 9:37am
So it is a NUN and NOT your mother you are listening to?! (although I have to admit if it is sister Wendy, I would too! she is really cute!) Well! here is the punch line! : "When I thought about it, I realized I had been criticizing qualities that, in some form or another, run rampant in American film as well"!! This I think is repeatedly mentioned by most mothers! I strongly advice you DO sit down with her and see some Hindi movies when she asks you!
Anonymous wrote on Fri, 01/13/2012 - 10:24am
Really thoughtful and well written piece! I find myself with the same obsession with Hollywood films and the same reticence towards Bollywood films. While I don't think this will ever change, your blog certainly has me thinking. And Sholay is a really excellent movie.