Restaurant Wars on Top Chef this week. Am I the only one who's never terribly excited about Restaurant Wars? They build it up like it's THE thing we've been waiting for all season, but for me it's yet another group challenge (boo) with more non-cooking related things that an actual chef wouldn't be overly concerned about. Of course decor, waitstaff, front of house, and expediting are all key parts of a restaurant that an owner/chef has to figure out and stay on top of to smoothly run an establishment. But last time I checked, this wasn't called Top Restauranteur. ANYway. How'd they do?

The chefs were divided by gender, and the ladies decided to go with a rustic, farm-y feel in their restaurant Half Bushel. Unsurprisingly, Bev found herself getting shut down by the other women during their planning stages. Is this because she's perceived as weak and easily manipulated? Is Bev making matters bad for herself by being too passive? Do the other chefs just plain dislike Bev? I'm sorry to say that it's looking like a combination of all of the above.

Meanwhile, the men decided to go with simple dishes, elevated to a fine dining level. They named their restaurant Canteen to conjure ideas of camp and the basic meals you'd have there, and they elected Ed to serve as front of house since he owns his own restaurant in Kentucky and often has the same function there. The men of Canteen had the unlucky position of being first up, and almost immediately it was clear that the lack of planning that went into expediting is creating chaos in the dining room. Even worse, the service window is totally visible to the diners and judges, so the embarrassing mess is totally on display, with Ed asking diners to wait and practically begging his teammates to get the service together. Paul took it upon himself to step out of the kitchen and serve as expediter. I'm not sure what's in the box that Ed's carrying, but my guess is sadness.

The judges liked Paul's take on "ham and eggs" with duck fat crostini, though Emeril noted that the crostini was greasy. They seemed fine with his pork belly as well, though the dish he worked on with Ty, a poached salmon with tomatillo jam, got mixed reviews and seemed clearly disjointed. "From what we've seen from Paul, I was expecting a lot more," Tom noted. Maybe it's because he worked on three dishes AND was expediting?? We found out that Paul went to a private all-boys school, always got good grades, and was always under the pressure of his mom's high expectations. Okay, so the overachieving multitasking tonight is making sense.

The following night, the women appear to have learned from the men's mistakes, putting Beverly on expediting and giving her responsibility for just one dish. She also had to cook Lindsay's grilled halibut while Lindsay worked front of house. Bev disagreed with the cooking technique Lindsay instructed Bev to use on the halibut, but Bev kept her mouth shut. Take note! As soon as service started, it was the crap-on-Beverly show all over again, with Lindsay screaming at Bev for her expediting, treating her "like a child" and spending more time in the back than in the dining room. Bev just can't seem to catch a break, can she?

But wait, the judges absolutely loved her braised short rib and apple slaw with kimchi. Hugh called it "the most flavorful thing [he's] had" during the challenge, and the other judges agreed. While this was happening, Lindsay berated Bev for messing up Lindsay's halibut, prompting Grayson to stand up for Bev once again and affirm that she was doing exactly what Lindsay told her to do. I hope Bev's written Grayson a thank you note or something; she's really turned into a bit of a verbal bodyguard for Bev over the course of the season.

In the end, the men had better service in their restaurant (which just goes to show how badly things went for Half Bushel), while the women had better food. Of course, since it IS a cooking show, the women won. The individual prize went to ... Beverly! Emeril said that adding kimchi raised the level of her dish, and she seemed pretty much out of her mind with happiness. She got one of those massive bottles of wine and a trip for two to Napa Valley. Not bad! Lindsay: Pissed about her halibut; Bev: Shocked and happy

The men had to get chewed out for their sub-par cooking. Luckily, the judges noticed how much work Paul did, and they liked Ed's dessert, if not its name, so they were both safe and Ty was sent home. Next week: Charlize Theron! I just include this because Paul is adorable, you guys.

I'm really excited that I get to discuss yet another competition reality show I love with you guys: Face Off. Fourteen special effects makeup artists compete to make all kinds of different monsters, aliens, zombies, and other creatures that would probably freak me out in most other contexts. This season we've got an eye on Sue Lee, a 26-year-old who just graduated from special effects school (who knew there was such a thing?) and now lives in New York. We didn't get to see much of her work in the premiere since there are so many contestants, but she did get to show off her aging skills in the initial challenge, then worked with a partner on creating the Cowardly Lion for the challenge in which they had to reimagine the Wizard of Oz. Sue did what looked to be some pretty impressive lionizing of a model's face, but she was endlessly frustrated with her partner Athena, who was supposedly a body paint expert but spent all of her time on the lion's paws, which the judges dinged for not having claws. You can see in the photo below how little is done on the model's body. These guys are off to see a very freaky wizard.

Luckily, the women's team won (what's with the battle of the sexes this
week?). so Sue was safe. Hope she'll be around for a while -- I love
this show! 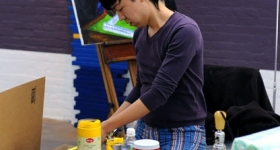