It kind of looks like Beverly is cutting up her fingers, but don't worry, she didn't.

Okay, let's get right to the guy who everyone(ish) is talking about, Heejun Han auditioning on American Idol (yep, it's back). The 22 year old is from Korea and now lives in New York and he got one of those "this guy is a weirdo" edits leading up to his audition that made me pre-emptively cringe. "I thought I was a little good, but they're crazy good," he said about his fellow auditioners, a bit intimidated. He marveled at Ryan Seacrest's tiny head, dwarfed even further by Heejun's own self-described big head. And his huge family waiting outside the audition room had never heard him sing. If that ain't the formula for "embarrassing Idol wannabe," I don't know what is. A surprising choice to add to a "big head" with a hat.

So imagine my (and the judges') surprise when the soul and R&B fan busted out a little Michael Bolton ("How Am I Supposed to Live Without You") and sounded ... pretty good! I wasn't freaking out or anything, but he's got talent. J.Lo was silently mouthing the words along, exclaiming "I love you!" when he finished and Steven and Randy had similar praise (Randy was "really impressed and shocked," actually, though that's not that high a compliment). Heejun got three yeses for Hollywood and what looked like some tears in his eyes and in the post-interview he sang "Hollywooood," holding that second 'O' so long that he now has a catchphrase.

I'm happy for Heejun, but I'm sorry to say that I'm not terribly hopeful. The fact that he's already gotten the freak edit is not great and the accent that he speaks and sings with -- while impressively slight for an apparently recent immigrant -- is sure to be off-putting for general audiences if he gets further along in the competition. Think of how far contestants with, say, Spanish accents have gotten, especially once voting began. I'll give you a hint: not very. But for all my naysaying, I sincerely hope that Heejun proves me wrong and breaks the Korean American dude curse on Idol (see: Paul Kim, John Park). Good luck, man!

Glee returned from its break as aggravatingly nonsensical as ever, but Mike did get a dance feature on Artie's performance of "Moves Like Mick Jagger," and he and Tina got a cute little moment during the couples montage. We also got a swell bit of racism when Becky was walking down the hallway, mentally sizing up why none of the guys she sees is fit for her affections. "No Chang do, I'm no rice queen," her internal monologue says about Mike Chang. Great. Well, what little character development you've done with Mike as the dance/gotta perform guy just kinda went out the window, didn't it?

On Top Chef, Beverly had a crushing moment when she ran out of time to add her curried Rice Krispies to her Quickfire plate. This left her disqualified to win, and Padma rubbed it in further by saying that had Bev completed her plate, she would have won the Quickfire -- and immunity -- "by a mile." Why you gotta be like that, Padma?

For the really fun elimination challenge, the chefs had to each create a dish that represented the evil queen in Snow White, played by guest judge Charlize Theron, who was actually pretty great -- let's get a Theron/LaBelle judges panel for the finale, am I right?. Ed began the meal with a starter that had white sauce on one side and black sauce on the other, representing the battling good and evil sides of the story. He was praised highly and Charlize added that she would eat his dish every day.

Paul's dish started out with fourteen components, but he got rid of a few and took time to focus on his presentation, which included a "bloody" (read: beet-y) hand print on the white plate with his "enchanted forest" ingredients around the edge. The judges loved his creativity and the way the flavors of Paul's dish came together. In what Paul thought was a deliberate demonstration that she could cook it when not using Lindsay's directions (see last week), Bev chose to serve halibut. Here's her explanation (I'm using the term loosely) of her dish:

"Snow White is the halibut and prevails in the midst of the evilness of the wicked witch, and the black heart from the forbidden black rice, and the bleedingness of the serial killer is the red curry sauce."

Um. The food was very tasty ("The halibut was cooked perfectly," Charlize said, probably to Lindsay's chagrin), but Bev got dinged for not being as imaginative with the challenge as the other chefs. Paul won the challenge (and tickets to the world premiere of Snow White, meh), and Bev landed in the bottom three. She was told that there was also problems with her sauce's stickiness and she broke down in tears, telling the judges that she "was going for more elegant than grotesque" and she's "doing this for [her] family." Did I detect some tears in Charlize's eye as Bev spoke? Well if I did, it wasn't enough because Bev was sent home. She was an odd duck for sure, but I was so hoping to see her prove the bullies wrong and make it to the finale. Bev did beat the juggernaut Nyesha in "Last Chance Kitchen," so it's possible we haven't seen the last of her... On Face Off, the artists had to create characters based on creatures at the aquarium and make sure that they could be completely submerged in water. Sue's team chose the leafy sea dragon as their inspiration, as did another team. Sue was mostly responsible for the chest and back pieces of the costume, the latter of which was especially crucial because it had to connect to several of the leaf-like protrusions that give the leafy sea dragon its name. We got a cute little dork-out moment from Sue this week when she gushed a bit over judge Patrick Tatopoulos, who directed Sue's beloved Underworld. Aww, cute. Both leafy sea dragon teams were safe this week, so I'm hoping we find out that Sue has a Patrick scrapbook or something next week. How amazing would that be.

Super creepy! I love it. 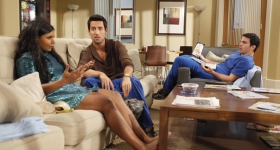 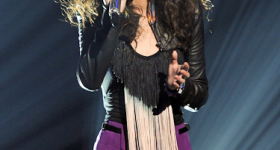