But surprisingly, a huge chunk of AAPIs, 32 percent, remain
undecided on which candidate to vote for.

In a tight presidential race, where most national polls show very
few undecided voters overall, Obama has hardly sealed the deal with AAPIs.

The National Asian American Survey, which polled more than 3,000
AAPIs across the US from late July to mid-September, found that 43 percent of
the AAPI community would vote for Obama, while only 24 percent support Romney.

One reason for the high number of undecided voters could be the
huge proportion of AAPIs who are immigrants, says Karthick Ramakrishnan, a
University of California Riverside professor who ran the opinion poll.

According to a Pew Research Center study in June, 74 percent of
Asian Americans were born abroad. Ramakrishnan said it takes a while for
immigrants to fully understand the political system and decide who they are
going to vote for.

“It’s not just a higher undecided, they decide late in the game,”
Ramakrishnan said. “Also when it comes to affiliating with the parties, they’re
more likely to say, I don’t think in these (partisan) terms.”

However, the long-term trend looks promising for Democrats, who
have overcome what was once a Republican advantage among AAPIs only 20 years
ago. Back then, most AAPI voters were staunchly anti-Communist and supported
Ronald Reagan and George H. W. Bush. Now, the tables have turned, with AAPIs
choosing Democrat (or lean Democrat) over Republican (or lean Republican) 46 to
23 percent, according to the survey.

Much of the shift is due to the high number of immigrants who came
in the 1980s and 1990s.

“You had a lot of Asian Americans who naturalized and came of
political age during the Clinton Administration, and generally, it was a time
of prosperity,” Ramakrishnan said. “You had a Democratic Party that was not
hostile to business. So generally, Asian Americans had a favorable view of the
presidency of Bill Clinton, and Democrats got a lot of benefit from that.”

Many AAPIs were also alienated by Republicans after 9-11. George
W. Bush’s counter-terrorism policies turned away Muslims and South Asians, making
these groups some of the strongest supporters of Obama. The GOP shift against
immigration alienated more AAPIs.

If these voting trends continue, Democrats could benefit from a
demographic advantage in future elections as more Asians immigrate to the US. Asian
Americans are now the fastest growing minority group, according to the Census
Bureau. Between 2000 and 2010, the Asian American population grew by 46
percent.

Still, neither party has given AAPIs as high a priority as Latinos
during this election cycle. Both Republicans and Democrats chose high numbers
of Latino speakers to headline their conventions, and both are campaigning
heavily in battleground states with a high percentage of Latinos, such as
Florida and Nevada.

Currently, only one in six AAPIs lives in a battleground state.
However, battleground states have some of the fastest growing AAPI communities
in the country. From 2000 to 2010, Nevada’s Asian American
population grew by 116 percent, while Virginia’s grew by 71 percent, according to the Census Bureau. Both
states now have higher Asian American proportions than the national average. If
these trends continue, the AAPI vote promises to become more critical in the
years to come.

“One phrase which I’m sure you’ll hear a lot is that ‘we can be
the margin of victory’,” Ramakrishnan said. “We might not be that big, but we
might be big enough to make a difference in these close contests.”

While Obama leads among most AAPI ethnic groups, a surprising twist
came from Filipinos, who are leaning towards the Republican Party in 2012,
according to the opinion survey. Romney is winning against Obama among
Filipinos, 38 to 32 percent, but both candidates have a shot at the 28 percent
of Filipinos who are still undecided.

The trend indicates a shift from 2008, when Obama won a close Filipino
vote, garnering 50 percent over John McCain’s 46 percent.

Filipinos have a set of unique characteristics, including devotion
to Catholicism and colonial history with the US, that makes them more open to
the Republican Party and track more closely to the US average than other AAPI
groups, according to Benjamin De Guzman, coordinator for National
Alliance for Filipino Veterans Equity.

No one is sure what is causing this shift. Although careful
to emphasize that it’s not the only reason, De Guzman said some Filipino
veterans have been making a lot of noise against the Obama administration over
World War II veterans’ benefits. These veterans complain that the compensation
fund, signed by Obama in 2010, excluded many who actually served in the war. Veterans
have filed a class-action lawsuit in federal court, and a group of them have
endorsed Romney and Republican congressional candidates in Nevada.

“I don’t think it’s
the one answer, but it is a major thing, and it will be something important especially
as the undecided people come out during Filipino American History Month,” De
Guzman said. “Whoever is able to talk to communities next month will get a
bigger slice of the up-for-grabs pie.”

The survey indicated that Filipinos have been hit hard by the 2008 financial crisis, with 9.4 percent of Filipinos reporting that they experience
foreclosure of their home since 2008, the third highest behind Cambodians and
Hmongs. 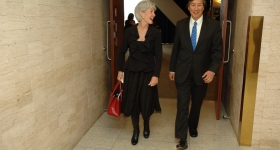 LTE wrote on Wed, 10/03/2012 - 6:56am
"So generally, Asian Americans had a favorable view of the presidency of Bill Clinton, and Democrats got a lot of benefit from that.” . It can be said Reagan super charged the "old" economy while Clinton supercharged the "new" economy. . A lot of factors come into play when discussing the Clinton economy. The birth and advancement of new digital technologies created an economic boom that could be compared to the growth of railroads in the late 1800's. . Bill Clinton's was smart enough to stay out of the way and let it happen. Money flowed freely and any business with an idea that might have a remote chance of success got funded. 1998 was a grand time. . What went unnoticed was the death of the old economy and the rise of China. Websites selling dog food had everyone's attention while steel mills were shuttered. . The Bush real estate boom then glossed over an economy hollowed out of traditional industry and when 2008 happened, the United States had less job creators to rely on. Free trade arguments ignored the fact most trading partners could only afford to buy our soybeans, not our manufactured goods. . Obama is working at cross purposes in trying to reignite the economy. Favoring certain industries while heavily regulating many others, his mixed signals leave businessman guessing as to which way they should go. FDR did the same and had gotten the same results we are getting today. . The election of 2012 will be noted more for it's emotional displays than it's thoughtful understanding of a world that has changed radically since 2000.