In
1968, Sen. Daniel Inouye of Hawaii gave the keynote address at the Democratic
National Convention in Chicago. Standing outside Chi-town’s International
Amphitheatre that weekend were thousands of young anti-Vietnam protesters, many
being beaten and arrested by the Chicago Police for “inciting to riot.”

While
other public officials at the convention looked to shift focus away from the
civil unrest and war controversy that was going on outside, Senator Inouye had
other plans.

“The Vietnam war is immoral,” he
said. “… [But] I doubt we can blame all
the troubles of our times on Vietnam.”

That was Senator Inouye, a
no-nonsense straight shooter who was never afraid to speak the truth as he saw
it. The son of Japanese immigrants,
Inouye was born in Honolulu on September 7, 1924.  As a teenager, he was a medical volunteer
during the attack on Pearl Harbor. Following the attack, over 127,000 Japanese
Americans were transported to internment camps and imprisoned due to their
ancestry. The military would not enlist
Japanese Americans for the war.

Inouye would petition the US
government for the right to serve, and when the army dropped its enlistment ban
on Japanese Americans in 1943, he volunteered for the all-Nisei 442nd Regimental Combat team.

Speaking about his motivations for
joining the Army, Inouye said in a PBS interview, “I wanted to be able to
demonstrate, not only to my government, but to my neighbors, that I was a good
American.”

Inouye would go on to serve his
country honorably, losing an arm and getting shot several times while trying to
advance his company to safety in a battle near San Terenzo, Italy.

Fifty-five years after his sacrifice,
President Bill Clinton awarded Inouye with the Congressional Medal of Honor.

After the war, Inouye went back to college and earned a law degree
from George Washington University. In
1959, Hawaii was granted statehood, and he was elected as its first member of
Congress. In 1962, he was elected to the
Senate, replacing fellow Democrat Oren E. Long. Inouye never shied away from giving
Hawaii political advantages on the Hill. In a brief interview with me several months before his passing, Inouye talked
about his support of filibusters, an unpopular political tactic currently used by
Republicans to prevent the vote on a measure.

“As someone representing a small
state, it was a tool used to ensure we were not pushed aside,” he said.

He proclaimed himself, “the No. 1 earmarks guy
in the US Congress,” during his tenure as representative of Hawaii’s “at-large”
district.

As a Senator, Inouye would bring
millions of dollars to Hawaii. From 2009
to 2010 alone, he sponsored close to 137 solo earmarks, totaling over $425
million. Although the tactic was seen negatively by his
colleagues, Inouye was always unapologetic about bringing money home to his
constituents.

“I would hope I know more about
Maui’s problems than my good friend the President or any of his Cabinet members,”
he said in an interview with Maui News earlier this year.

An Advocate
for the Disenfranchised

After he came back from his WWII
service, a young Inouye was once told by a barber, “We don’t serve Japs here.”

As a person of color, Inouye lived
in an America where segregation was still alive and well, and racial slurs occurred
daily. Inouye’s experience as a
disenfranchised citizen inspired his policies and stances. As a public servant, he confronted the
established order on behalf of the marginalized.

During the early debates over
segregation in the south, Inouye was one of the only senators on the right side
of those debates, pushing vehemently to end segregation in all parts of the
country.

Inouye was one of the last sitting
senators who helped pass not only the Civil Rights Act, but the Voting Rights
Act, which changed the minimum voting age to 18.

As an honored military veteran,
Inouye boldly took a stance to secure free speech for citizens who felt the
need to burn the flag in protest. The ACLU
called his position “particularly meaningful to the defense of free speech
because of his military service.”

Inouye rejected the Defense of Marriage Act in
the 1990s and was a staunch supporter for marriage equality. On the senate floor he once asked his fellow
colleagues, “How can we call ourselves the land of the free, if we do not
permit people who love one another to get married?”

Vice President Joe Biden said of
Inouye after his death, “To his dying day, he fought for a new era of politics
where all men and women are treated with equality.”

“After all these years, racism is
alive and doing well,” Inouye said in 2008, even after Barack Obama received
the Democratic nomination for president.

That
was Daniel Inouye.

He
was always pushing us further, to understand the truth of who we are as a society,
always looking toward the future.

Yet
for many outside his inner circle and native Hawaii, it could be hard to relate
to him..

It
could be hard to relate to a young man who left high school to join the Red
Cross, helping wounded soldiers during one of our nation’s most pivotal
disasters. Or to a teenage boy, who was seen as an alien in his own country, who
still fought honorably for that country, despite its faults. It could be hard to relate to a wounded soldier
who attacked three machine gun nests by himself in order to save his squad, and
still lived to tell the story. And few
have lived the life of someone who has dedicated 55 years of his life to serve
all Americans.

It
could be hard to relate to a man like Daniel Inouye, because he was as
exceptional as they come. His courage
surpassed comprehension, and his accomplishments now belong to the ages.

“Aloha,”
great Senator Inouye, you are Hawaii’s own true son.

Ivan V. Natividad is a former features reporter at Roll Call News in D.C. and has contributed as a freelance writer to outlets like AsianWeek, The Nation and Wiretap Magazine. He is currently a reporter with the Hyphen politics team and is also doing work with the San Francisco Bay Guardian as a summer news intern. Natividad is completing his masters degree in journalism at Georgetown University. 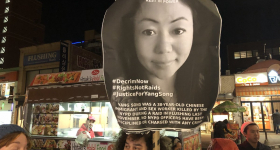