Since 2004, the Goodman Theatre in Chicago has nurtured up-and-coming
American playwrights through its annual New Stages Amplified program, premiering
their works as staged readings or workshop productions that are free to the
public.  Notably, the two plays
receiving full-scale productions this year are written by women of color -- Tanya
Saracho’s Song for the Disappeared, the
second in a trilogy of works exploring domestic drama on the drug frontier
between Texas and Mexico, and Wasserstein Prize winner Frances Ya-Chu Cowhig’s The World of Extreme Happiness, which
follows the life trajectory of a young female migrant worker in China.

While the Goodman has an
admirable record of developing plays by playwrights of color (nearly a
third of its premieres over the past three decades), and while Saracho and
Cowhig are rising stars on the national stage, both playwrights still admit to
struggling with the pressures of “translating” their works for more mainstream
(i.e. older and whiter) American theatergoers. During an Artist Encounters Q&A on December 14, Cowhig acknowledged that the
more obscure the historical and cultural context of her work, the more
background information she feels obliged to include, “up to a point,” she added.

But at what point does exposition get in the way of artistic
intent? Or, to ask a slightly different question, what if alienating your
audience is precisely the point? Such
issues came to the fore when an audience member questioned why Saracho’s play
included a line in Spanish -- clearly a delightful joke -- that was delivered five
times and remained stubbornly un-translated into English. “Did you feel alienated?” Saracho
asked. "Yes, actually," he replied.
“Then I succeeded,” she joked. Turning serious, Saracho went on to describe those
five lines as a “gift” to those in her audience whose language, voices, and lives
remain sorely under-represented on mainstream stages. “Anyway, the joke had nothing to do with the plot -- you didn’t
miss anything,” she reassured him. But the man still seemed perplexed as he moved back into his seat.

Cowhig, too, is no stranger to alienating her audience. A
self-described Taiwanese/Irish American “diplo-brat,”
Cowhig has established herself as a fearless, fiercely intellectual writer
whose work unsettlingly thematizes the transgression of boundaries, whether between
the living and the dead (410[Gone]), between
a female Guantanamo interrogator and her male detainee (Lidless), or between rural and urban China (The World of Extreme Happiness). The unflinching brutality of Lidless’s portrayal of the consequences of torture prompted an
admiring critic to
describe it as a “confrontational play that…does not particularly want to
be liked -- it wants to [be] viewed critically.”

Audiences may find Cowhig’s latest play easier to sympathize
with, in no small part due to its winning cast of six Asian and Asian American actors who nimbly weave their way
through thirteen characters across the socioeconomic spectrum of present-day
China. The narrative begins in
1992, with the ignoble birth and prompt disposal of the absurdly named Sunny,
who somehow survives the fate of the slop bucket. Fourteen years later, she leaves for the city of Shenzhen
and finds work as a janitor at a local factory to raise money for her younger brother’s
education. Encouraged by a fellow
employee, Sunny begins attending self-help classes (a jarring amalgam of nightclub
and megachurch) to obtain the secrets of success and gain a promotion to
replace a worker who had recently committed suicide. Before long, however, Sunny comes to realize the massive
human costs of labor exploitation, and she is forced to make a life-altering
choice.

The character of Sunny is vividly brought to life by Marissa
Lichwick, who brings great energy and poignancy to a challenging role that
veers -- rightly, I think -- between naïve caricature and tragic hero. The broader comic strokes of Sunny’s
persona reflects the more stylized moments of the show in the first act,
especially in the scenes where she and her friend Ming Ming (Cindy Im) are held
in thrall by the shadowy, charismatic guru Mr. Destiny (Kevin Matthew Reyes). In the post-show talkback, several
audience members criticized these scenes as “unrelatable”; another woman, a
frequent traveler to China, suggested that Mr. Destiny and the hysteria of the
girls at the meetings rang too falsely “Western.” But while Mr. Destiny is no
doubt indebted to the figure of the American motivational speaker, his
capitalist self-improvement mottos also struck me as ironically evoking the political
sloganeering of the Cultural Revolution (as for the shrieking girls, well, obviously the woman had not run into
any teenagers on her trips). In
the world of extreme happiness, and certainly in the world of present-day
China, there is no single metonymic chain that links vulgar modernity to the
West alone.

On the train ride home after the show, one of the actors mentioned
her frustration with her non-Asian theater friends who said they
couldn’t "identify with" the relationships of the family members within
the play. “Was it the writing? The acting? Or did they just not get it?”
she wondered. I immediately recalled Saracho’s Spanish joke and
the questions of identification and misconstrual that it raised.
Another play I couldn't help thinking of was David Henry Hwang’s 2011
Broadway hit Chinglish, which, like Cowhig's play, debuted at the Goodman and is set in present-day China. In an interview, Hwang described
his Mandarin/English comedy of errors as a play that dramatizes
mistranslation -- linguistic, cultural, sexual, and otherwise: “On the most
superficial level there is language; we literally don't know what the
other person is saying. But even when they do understand the words,
sometimes there are cultural values which are different, and things that
we believe are intrinsic, which are, I think, much more culturally
conditioned.” (Granted, Hwang helped out his audience by projecting
English subtitles on a screen, but this was more for comic effect than
to enable genuine understanding.)

But even though it is entirely in English and contains outrageously funny moments, The World of Extreme Happiness goes beyond
Chinglish and Spanglish as theater of
estrangement, with no sly winks to an in-crowd and very few cultural
touchstones to make any member of the audience (Asian or no) settle in
comfortably or even familiarly for too long. Part of this aesthetic is tied to the realities of
censorship and oppression -- as Cowhig has noted, “The more marginalized the group I am trying to represent
is, the less likely it is that a member of that particular group will ever even
see a production of the play I've written.” Yet in another sense, it is also an
intriguing revision of the famous “estrangement effect” (Verfremdungseffekt) theorized by the German playwright Bertolt
Brecht (who in turn claimed classical Chinese theater as an influence). While Brecht employed avant-garde
formal techniques to shock his audience into heightened critical awareness by
seeing things anew, The World of Extreme
Happiness deploys an estrangement of culture,
representing a broader sea change in American theater that is being ushered in
by playwrights like Cowhig and Saracho who are emerging from the margins and
speaking -- and moving -- to the center. 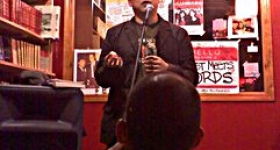