Smiling baby Heejun in a hanbok on Idol

Before we get into this week's shows, last week I forgot to mention Kumail Nanjiani's stand-up set on Conan. Check it out right here. We last saw Kumail when he was on Portlandia, so I hope he continues popping up on our shows... Maybe we'll see you on Project Runway and Glee, Kumail! Kumail keeps it real in a hoodie on national television.

This week on RuPaul's Drag Race, the queens had to design and pose for the covers of fake magazines, each girl tackling a different topic. Jiggly got "Battle of the Bulge," a fitness mag, and after declaring "me and comedy don't mix," she decided to do a serious take on the topic, mentioning her own struggles with weight that included binging and purging. I'm glad to know that Jigs takes eating disorders seriously, but a Drag Race challenge is NOT the place to avoid comedy! RuPaul herself tried to relay this during her workroom visit, suggesting that Jiggly "embrace the funny" and reminding her that her own name is "Jiggly," a lighthearted play on her weight and appearance. But Jiggly shrugged off the advice, saying, "I got a 1240 on the SATs; I need to show that I have intelligence." Her humorless take on fitness went over about as well as you'd expect from Drag Race judges: When Jiggly helplessly asked, "What the hell would I write about, how to eat a pound of chicken?" RuPaul simply replied, "Exactly." Sigh. It was expected, then, that Jiggly landed in the bottom two. She and Willam had to lip sync to guest judge Pam Tillis's song "Mi Vida Loca," prompting Jiggly to lament, "You couldn't give me a Lil' Kim song?" Between the ill-fitting country flavor and the fact that it was her third time in the bottom, it was finally Jiggly's time to go. She knew her mom would be proud of her, and I sincerely hope that the outbursts and tears that happened over the course of the season helped her work out some of the issues she's had surrounding her mom and the rest of her family.

Phi Phi, on the other hand, had a great week. Well, besides the fact that she's possibly the worst reader in all of Drag Race history, limply throwing weak shade around with the confidence and cleverness of a bowl of cold oatmeal. No matter, though: her travel magazine handily won the challenge, getting her a cruise to the Bahamas, and the judges responded positively to her runway appearance, calling it the best she's ever looked. Phi's looking better and better, but I'm worried that her wits aren't sharp enough to keep her in the game for much longer... On American Idol, the theme was "songs from the year you were born," also known as "make Dianne feel super old." Jessica, born in 1995 (kill me), was a "little diva" whom her mom described as fainting when she freaked out as a child (kind of hilarious how her dad brushed the fainting allegations off). That screaming and emotion may be "where her lungs got started," per mom, and it's not a bad theory. Jessica sang "Turn the Beat Around," and both Jimmy and guest mentor Wil.I.Am were impressed with her abilities, prompting the latter to label her a "swaggernaut." With her sparkly pants, dancing all around stage, and "Y'all ready?" mid-song, I thought this was Jessica's most energetic performance yet, but the judges found the quick beat of the song unsuitable for the singer (judge for yourself here). "Your voice has such strong vibrato...it lagged a little behind," J.Lo commented. Later, Jimmy reiterated his support for the song choice, but he explained, "When she screamed, she lost her breath. When she lost her breath, she lost her rhythm; that's where the judges nailed her." Don't worry: Jess was very much safe. Seriously: those are some SPARKLY pants

Heejun was born in 1989 (erg), and his wonderful mother described him as being a silly, very funny boy who, of course, got his humor from her. With tears in her eyes, she described the way he would wake up when he was a baby: with a big smile on his face. Add a clip of both Han parents dancing in their living room and I am SLAYED. Heejun sang "Right Here Waiting," and Jimmy helped him with some of the pronunciation that was affected by his accent. I wonder how much more of that specific type of coaching goes on that we don't see. This week's Heejun guest mentor bit was to ask for Wil.I.Am's autograph, slyly adding, "You can write Fergie's number on there." The song was sweet and Heejun-y, if a bit boring, and he seemed to be holding back some tears by the end (was he thinking of his baby smile, like I was?). Randy seemed almost upset by the performance, calling it pitchy, pointing out how Heejun sounded out of breath, and wondering why he didn't pick a song with "urban R&B swag" like he had early on (does he mean ... Michael Bolton?), and J.Lo and Steven also mentioned his struggle with his breath. See what you think right here. Afterward, Ryan asked if Heejun was thinking of anyone in particular while he was singing. He said he was, pointing out his girlfriend in the audience (sorry, girls, he's taken), but adding that 20% of his mind was on J.Lo "and 10% on Fergie, of course." You are a patient one, Heejun's girlfriend. She was also a happy one the following night when Heejun was safe.

Note: Jimmy Iovine believes there is going to be "an Asian pop music explosion" (though he expressed doubt that Heejun in particular would be the one to bring it on). Thoughts?

There hasn't been much Survivor talk 'round these parts because ... well, Christina and Jonas haven't really been up to much. But this week the male/female teams got mixed up, and Christina and Jonas are now together on the Monano tribe. Nothing has changed much, though: fellow (truly awful) tribemate Colson targeted Christina as the one to get rid of right off the bat, and Jonas is going right along with whatever Colson says ("I'll be his bitch" were his exact words) so that he can remain safe. How anyone can continue following a guy who somehow convinced his tribe to go to elimination when they didn't need to is beyond me, but at least Jonas is being open about his kind of lame strategy? I guess? Jonas: I'll do whatever you tell me to do, Dictator Colton

On Top Shot, the contestants had to swing from one platform to another on a rope, pirate-style, then take aim at their targets from the second platform. Chee was up first for the red team and for whatever reason, he just couldn't make it all the way across. He slammed into the second platform on his first go, losing precious time as he climbed back up to try again, then he missed it a second time and finally made it on the third. This embarrassment got the red team started at a huge disadvantage, though Chee did make up time by getting his target in one shot. Still, the red team lost the overall competition, and Chee was immediate and upfront about his willingness to be voted into elimination. It's a testament to both the respect his teammates have for him and the level at which others screwed up that he didn't get a single elimination vote. Phew! Work on those rope skills, Chee!

And finally, Ronnie Escalante is one of the design hopefuls on the new show Fashion Star. Though the premiere was 90 minutes, there are so many bells and whistles thrown into the production that designers like Ronnie got just a few quick moments on screen: the buyers didn't go for his trio of one-shoulder dresses, but the judges saved him from getting kicked off all together. Here's hoping Ronnie gets more than a blink of screen time next week! Ronnie and his fellow designer, looking tiny amidst a sea of models 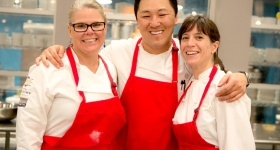 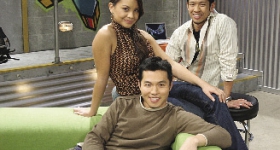