Above: my girls meeting for the first time.

I've been out of commission for a little bit, as I went off and had that baby I didn't know what to name. We now have a new baby girl at home, with a name we agreed was just Asian American enough.

New parenthood has generally been much easier for us the second time around. We're certainly not as terrified and nervous. We've so far kept one kid alive for over four years and she seems to really like us; surely we can do this again!

Our circumstances are also very different from our older daughter's birth. We're now married, for one. We both have stable jobs with benefits and paid parental leave. Not to mention we live in Los Angeles now, a far cry from the small Connecticut suburb our older daughter was born in.

Oh, one more thing: our younger one looks more Asian.

I felt a weird and troubling sense of relief when, after the normal post-birth swelling in her face subsided, I saw she looked a little more like me, and even a little more like my Korean mother-in-law. Naturally I find each of my daughters beautiful in her own right, but when our older one was a baby, people had so many questions and comments. So many people asking where she got her light hair, so many people asking "what" my husband was, so much insinuating that these people didn't think this was really my daughter, so many strange assumptions about hybrid vigor, so much of, "Wow, she looks ... white. Like, not Asian at all." And it seems to be a fairly common occurrence for parents of biracial kids. There's an entire blog based on a question I've certainly heard (at least implied) before: I'm Not the Nanny.

As I mentioned, we're no longer living in suburban CT with the people we grew up with. LA is a huge city where fewer strangers will feel entitled to define or at least ask how we identify. And because it's a much bigger city, there are also a lot more family models, more transnational and transracial adoption, and half the kids in my daughter's preschool are multiracial. I'm sure I'll field a lot fewer questions standing in the checkout line out here, at least as far as my baby's ethnic identity is concerned.

Especially since my younger one has my nose and my lips. And even though she really has my husband's eyes, people will more likely associate that feature with me.

In any case, I shouldn't care. The questions people have about my family are their own business, just as the answers to those questions are my own business, and I should feel no obligation to field them. But those questions and implications that my kids don't look like my kids just hold a very different weight when paired with the unsolicited advice that strangers seem to love giving to a person holding a baby.

"Are you sure that's your kid? Well, you probably don't know how to raise her, so here's some advice you didn't ask for."

I'm not saying that's the intent, but that's often how it feels, when you're the one being interrogated. 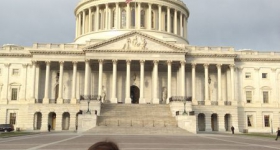 Guybe wrote on Sun, 03/11/2012 - 11:50am
Being bi-racial and growing up in suburban CT and now raising my multi-racial family in Oakland I can relate to your journey. There's often a big gap between intent and impact. Thanks for your thoughts and words.