One standout film showing at this year's Los Angeles Asian Pacific
Film Festival is Keye Luke,
a short biopic named for its subject. Keye Luke was a pioneering Asian
American actor who was most well-known for being the first Kato in
the original Green Hornet from the 1940s, even before Bruce Lee (but donned
goggles, for a different trademark look). Luke was also known for playing the
"Number One Son" Lee Chan in the popular Charlie Chan films of the
1930s, as well as Detective James Lee Wong in Phantom of Chinatown (1940), Agent Ah-Fong in Secret Agent X-9 (1945), and a string of
"good guy" roles as lawyers, doctors, and detectives, while many
of his contemporaries were stuck playing shady villains. Luke was the first Chinese American contract player signed with RKO,
Universal and MGM. Later in his career, Luke’s career got another revival, as
he played Blind Master Po in the 1972 TV Series Kung Fu, and the
shopkeeper Mr. Wing in the Gremlins movies. On top of being an
actor, Luke was also a painter and an artist, and created murals as an advertising artist at Fox Studios.

For the short film biopic, writer-director
Timothy Tau (who is also the winner of the 2011 Hyphen Magazine Short Story
Contest) paints a portrait of Luke's (played by Feodor Chin) early life and work, and focuses on a time
when Luke broke down boundaries as a leading Asian American male actor. The
film brings forth various people in Luke’s life, such as
his family members. Brother Edwin Luke (Archie Kao) also acted as the Number 4 Son in the Charlie Chan films, father Lee Luke (Kelvin Han
Yee) was an artist/painter who owned a shop in Seattle, and wife Ethel Davis Luke
(Elizabeth Sandy) wed Keye Luke when interracial marriages were still
illegal in the United States.

Other Asian American Actor luminaries of that
period also make an appearance, such as Benson Fong (David Huynh), Lotus Long (Mei Melançon), Suzanna Kim (Jolene Kim), Frances Chan (Hedy Wong) and many more. While many of these names are not being talked about today,
this film highlights a nearly forgotten "Golden Period" for Asian Americans in
Hollywood. Tau's short piece (shot in black and whhite) works wonderfully
as an informative and stylish period-piece homage to this era of American
Cinema.

Tau hopes to honor the contributions
of the very first generation of pioneering Asian American actors with this
film, and also plans to expand the short into a feature film not just about
Keye Luke, but Sessue Hayakawa, Anna May Wong, and Philip Ahn -- who were all
part of Keye Luke's generation. According to Tau, it will be a longer film akin
to The Avengers, where each subject is tackled individually in separate films or stories, and then brought together for a
grand finale.

But for now, make sure to catch this tribute to Keye Luke and his
contemporaries, which screens with the other Visual Communications Armed
With A Camera Fellowship films on Sunday May 13th 2012 at 7:00 PM at the
Director's Guild of America, Theater One. Tickets available here. 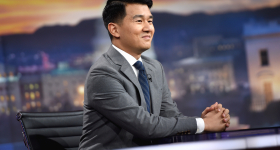