Jess belts it out, even though her belt-ish thing droops.

There's no use beating around the bush: Jessica Sanchez did not win American Idol. But hey, I think we can all agree that it's pretty amazing that an incredibly young woman of Filipino and Mexican descent making it to second place in one of the most prominent pop culture contests in our country is PRETTY impressive, right?

Jessica's first song for the finale was Whitney Houston's "I Have Nothing," chosen by Idol executive producer Simon Fuller. I personally love this song, so I'm a little biased when I say that I liked the performance, but Randy agreed that the first round went to Jess. Her second song was "The Prayer," the song that got her into the top 24. As I did when she performed it before, I found this one a bit of a snooze, and Jennifer called the second round as Phillip's. Seems right to look angelic while singing "The Prayer."

Idol tradition dictates that the finalists perform the original song that will eventually be their first single. Apparently Jessica and Phillip had multiple song options to choose from, and Jessica went with another nap of a tune called "Change Nothing." Jessica did all she could with it as usual, but it just didn't have those big diva moments we've come to expect from her. Jennifer said that if she were Jessica, she wouldn't have done a pop song for the single (what other choice did she have, I wonder?), which is incredibly unhelpful at this point. "You will make a record, you will make many records," Jennifer predicted in a reassuring tone that essentially said, "See ya." Jessica did try to explain that she wanted to do a "more urban" song, but it seems that was not a choice. Follow this with a song by Phil that was right in his laid-back dude wheelhouse, brought out a stinkin' marching band, and had all three judges on their feet, and the final outcome was pretty much sealed before a single vote was cast. Just chillin' on a piano, as you do.

Not that there wasn't some fun to be had in the last results show. Jess and Phil had a cute duet on "Up Where We Belong," and Jess reprised her performance of "I Will Always Love You" (she couldn't have busted that one out the night before, not that it would have mattered?). We got to see Heejun, who has a new haircut and an accent that's somehow more noticeable than ever. I think I got used to hearing it on TV after so many consecutive weeks, but hearing it again now is jarring. And finally, Jess got to have a truly bonkers duet with Jennifer Holliday on "And I Am Telling You." Picture two outrageously talented women trying to out-crazy one another on stage while barely holding it together, and you have this performance. Love it. This really doesn't capture the madness.

Much blog ink has long been spilled on the topic of why Jessica lost and yet another white guy with a guitar won this season of Idol, so I'm not going to go there. Just want to reiterate how cool it's been to see this young woman blow everyone away with her talent week after week. Millions of people cast votes for a Filipina, you guys! This is pretty awesome! And I also loved seeing Heejun run out to hug Phil when he was announced as the winner -- I'd forgotten that those dudes are friends, and it was a really cute moment. Warm fuzzies all around! Okay I know this is a lot of Jessica photos. But she made a rainbow!

Over on America's Best Dance Crew, it was Rihanna week. Which ... yessss. 8 Flavahz got "Birthday Cake" and the task of incorporating real fire into their routine. They took the song fairly literally and set up a giant birthday cake in the middle of the stage, lighting the candles with huge sparks at the end. JC felt a little icked out by the "grimy" lyrics and moves being paired with these very young girls, and I cannot stress how much I agree. It's awesome to see young crews like 8 Flavahz and Rated Next Generation show off their stuff, but some of the more scandalous stuff, especially with the girls, is definitely a little uncomfortable to watch. But it wasn't all scolding; D-trix praised the crew's technique and said that he loved how they used four candles to represent the average age of their crew. Oh, D-trix. Mos Wanted was safe as usual, and their song was "Cockiness" with the extra element of jackets. Once again, the guys went on a field trip (why do they seem to do this every week?) back home to surprise their dance students. Needless to say, the reunion was adorable. What is it about awesome dancers sharing the joy of movement with little tykes that always seems to make me cry? Anyway, the performance involved trench coats that the crew used, among other things, to drag one another across the floor in a neat little move, and in the end they threw off the coats to reveal very nice suits underneath. JC said that they woke him up with the musicality of their "great, great performance," and D-trix added, "Last week you dropped the ball, this week you stole the show." Not bad! Fanny Pak was voted into the bottom for a fourth week in a row. Like Idol, the final result seemed to be a foregone conclusion: no matter what the judges did or said, the voting audience had made their feelings on Fanny Pak clear. At least they got to go out on a fun note, as their song was "Talk That Talk" and their challenge was to emulate a drill team with rifle spins and throws. They got to go on one last field trip, getting tattoos for the new members so that the whole crew would match (sweet!). Their performance delivered on the impressive rifle tricks, and their America-themed outfits and peace sign formation created a general anti-war feel that was less narrative than their usual performances. D-trix expressed his confusion about the low votes for the group, complimenting their three-dimensional moves and tough ground work. JC admitted that he was feeling sentimental, saying, "To me what you've done this season has been art." When it was announced that they'd be going home, they had a tearful group hug and a nice send-off from Mario, who said that Fanny Pak was one of his all-time favorite crews. The crowd chanted Fanny Pak's name as they bowed and walked off stage, and danged if I didn't get a little misty-eyed then, too. Why is ABDC bringing out the waterworks in me?! Summertime means new shows, in particular one of my absolute faves, So You Think You Can Dance. In the auditions in New York this week, we met red-haired/clothed Toshihiko Nakazawa, a 26-year-old from Niigata, Japan. He said he was capable in a range of styles, including popping and locking, ballet, and whatever putting your ankle behind your head is. After a "hilarious" ESL moment (Nigel asked what Toshihiko "has in store for us," which he misunderstood as "store forest"), we saw his performance, which was a fun and athletic blend of hip-hop, breaking, and some other stuff (there's that ankle behind the head again). Nigel said, "There's been very few people who've entertained me as much as that with that style," comparing him to Twitch. Mary said that she "loved every second," and Tyce compared Toshihiko's body to a musical instrument. Still, it wasn't one of those home run performances that got straight through to Vegas; Toshihiko was sent to choreography where he struggled, particularly with the lifts, and so he chose to walk out. A shame, but also one of those times where I wonder whether a contestant has ever watched the show he's auditioning for. You do know that this is all about partnering and choreography, right? Maybe next year, Tosh.

I'm less excited about new series Duets, the latest in an endless parade of singing competitions. This one distinguishes itself by having four musician judges (like The Voice) who perform duets with each of their team members (only two per team, unlike The Voice -- thank goodness). The other judges score the performances, and then the eight contestants are ranked. On Kelly Clarkson's team is Jason Farol from Torrance, California. He sang, along with another potential team member, as one of Kelly's concerts as an audition for the show. He was incredibly nervous, even getting teary during the performance, but Kelly chose him in the end. He and Kelly performed "Breaking Your Own Heart," and it seemed that he was still suffering a bit from stage fright. You say your dad is a singer, Jason, so get some tips from him, quick! Although the audience was filled with members of his family and Robin Thicke called Jason "adorable," the judges gave him low scores, putting him at the bottom position at the end of the episode. He'll have a chance to redeem himself next week, so let's hope he gets those butterflies under control. Not gonna lie: totally jeals that he gets to hang with Kelly. 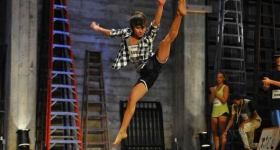