Martial arts legend, international movie star, and pop icon
Bruce Lee passed away 39 years ago this past week (on July 20, 1973). After his only son Brandon died during a
movie shoot, people assumed that his lineage had ended.

The Dragon’s sons can
be seen all over TV and Pay-Per-View with the rising popularity of mixed
martial arts and the billion-dollar growth of the Ultimate Fighting
Championship, which is rapidly eclipsing boxing as the world’s preferred combat
sport.

K-PoP caught up with two professional fighters to discuss
the “original mixed martial artist.” They were Vietnamese American Nam Phan, a UFC
featherweight from Orange County, CA, and Hawaiian middleweight Kendall Grove,
the season 3 winner of The Ultimate Fighter.

What was Bruce Lee’s
influence on you growing up?

KG: As a kid, I always wanted to be him, to emulate
him. After watching “Game of Death,” I
even made makeshift nunchuks and ran around the house with them. I thought I
was him! (Laughs) Later on, I really got
into his philosophy on fighting, how adaptive it was. His art and style motivated me to fight
smarter, too. NP: Of course I was a
fan growing up. We used to do imitations
and then practice his moves on each other and get in trouble. As an Asian American, he was the only role
model we had. He inspired us and still does to this day, to be strong and not
back down.

How did Bruce
influence MMA?

NP: Are you kidding
me? Bruce was the first mixed martial artist! He was more important to MMA than even Royce Gracie (a pioneering former
champion who introduced ground fighting to the sport). Bruce was about using whatever works -- boxing,
judo -- and trying to improve as a human being and fighter.

KG: He was the
pioneer. He didn’t believe his style was the best and wanted to mix styles to
create a new, more effective style. But
back then, that was seen as a big no-no, to cross train. But now MMA fighters use every martial art. Look at (champions) Anderson Silva, Jon Jones, and Junior Dos Santos. In fact, if you look at the gloves Bruce wore in his first fight in “Enter the Dragon” (an epic collision between Bruce and Sammo Hung) they are pretty much just like the gloves we use in the
cage today and that movie is almost 40 years old.

If Bruce fought in
the UFC as 135 lb. bantamweight, how would he do?

NP: With his mindset,
he’d do well. He already has the mind of
a mixed martial artist to go with a lot of talent and skill. KG: He would have
evolved because he was always learning. With his speed, power, and philosophy, I think he’d be dominant, a
champion or contender for sure.

If you had to get
into the Octagon with the master, what would happen?

KG: Because he’s so
fast, I wouldn’t try and stand with him. I’d try to take him down and ground and pound him.

NP: Oh, that’s
easy. He’d use his infamous one-inch
punch and knock me to infinity, make my heart explode. I’m dead. The first fatality in the UFC! (Lots of laughs)

Next up:  Phan makes his national TV debut on August 4, fighting on
UFC on FOX.  Grove recently won a split
decision in the ShoFight promotion and expects to fight again this coming
September.

K-PoP is short for Ky-Phong
on Pop Culture. Ky-Phong Tran is an award-winning writer and teacher based
in southern California and he’ll be writing about music, art, literature, Los
Angeles, fatherhood, and other musings. 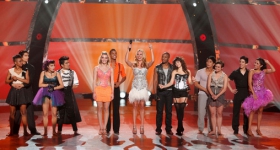 Hyphen TV: 'So You Think You Can Dance' Edition