After a two-week hiatus during the Olympics, So You Think You Can Dance returned with an episode dedicated to choreographer Mia Michaels -- each couple performed a classic Mia routine from a previous season. Dareian and Janelle got Mia's memorable bed routine, and there was some concern that both dancers' smallness might affect the performance. Their size was no matter in making the dance feel perfectly natural, but guest judge Michael Nunn of the BalletBoyz (I know, I'm not thrilled about the name either) picked up on Dareian's problem feet right away. "It's a real shame because everything's there."

Am I totally stupid or is there not a real reason that poor Dar can't seem to correct his foot problem? Is it a matter of concentration or some kind of physical thing that he can't control? I'd be curious to know. Anyway, Nigel said that this dance marked the first time that he's seen some personality out of Dareian, adding that he's "a great little dancer" whose technique is much stronger than that of Twitch, the male dancer who played his role in the original version of the dance. Mary, on the other hand, couldn't feel the raw emotion and passion that she wanted out of the pair, but she told Dareian, "There is nothin' gonna be stoppin' you but those tootsies!" Well put. What, this isn't how you guys go to sleep?

Cole and Lindsay got one of my favorite SYTYCD dances of all time, Mia's addiction dance, in which Lindsay played a desperate addict and Cole was her intense, dangerous addiction. I absolutely adored this one when Kayla and Kupono performed it in season five; Kupono's grinningly menacing take on addiction sent chills down my spine that I, and I'm sure many other viewers, remember as clear as day, so Cole had a real task ahead of him with this performance. I should have known that Cole would take it in his own completely singular direction: with the locking rattle of a slightly off-kilter marionette and the utter disinterest of the same. I haven't been able to take my eyes off Cole in the many, many times I've rewatched his performance. Poor Lindsay gets none of my attention because I'm so focused on taking in Cole's creepy, robotic indifference. I'm still not convinced that it was quite the right way to personify addiction, but I'll give him the entertainment recognition he deserves. It's like he doesn't even know she's there. Creepy.

Mary, who liked this performance the best that night, agreed with me; she described Cole as quirky and demented, saying that Kupono was more sinister, but Cole's version really worked and she was fascinated watching him. Nigel followed up with "You scared the [bleep] out of me," adding that the performance was "psychotically mental" and unemotional. "You were just destructive with it and it was quite chilling." Couldn't agree more. Cole was safe again this week, but Dareian landed in the bottom for a second time. He performed a lovely solo to "It's a Man's Man's Man's World," and though Nigel called him "wonderfully great" and "a tricky dancer," Dareian was one of the ones sent home. My disappointment was only further punctuated by Dareian's tears and true reluctance to leave all his new pals. Good luck, Dareian! I'm sure we'll be seeing you around soon.

On Top Chef Masters, the chefs got the amazing news that they'd be taking a helicopter to the Grand Canyon, where they'd be cooking their next meal. The celebration was tempered when Takashi was asked if he'd be okay (cut to Takashi, adorably making hand binoculars around his eyes) and he said, "Oh, I forgot." In an interview he explained, "I HATE heights. Even I cannot change the light bulb sometimes." He looked a bit queasy while the other chefs oohed and ahhed at the gorgeous views from the copters, but he made it all right for the elimination challenge, which had the chefs working in pairs and each cooking an ingredient used by the local Hualapai tribe. Takashi was paired with his old friend Thierry to cook venison and banana yucca, and it was sweet to see the two men joking around with one another in their different thick accents. Patricia worked with Chris on rabbit and squash. Hmm, what's going on over there?

Francis Lam was back as a guest judge and he had high praise for Takashi's dish: "The venison flavor goes in different directions and comes together in a rich, dark way." Patricia and Chris's collaboration was also praised, with a member of the tribe calling the rabbit "damn tasty" and the judges remarking on the different textures of the squash. The two teams took the top two spots, with Takashi and Thierry taking the win and splitting the prize money for their charities. That's another guaranteed week of Takashi-isms, you guys. Woo hoo! We barely got to see any of Ven in this week's Project Runway, which had the designers broken into two teams to make two collections. There was one Ven moment, though it wasn't with Ven himself: in an interview, competitor Dmitry (who is originally from Belarus) called Ven "a one-way monkey. I mean a one trick pony." And indeed, though Ven did succeed in making what he described as a modern interpretation of a classic suit, he was in the safe zone once again with his familiar structured design. Change it up, Ven! I beg you! The Korean jokes just keep rolling on Sullivan and Son with this latest exchange between mother and son:

Ok Cha: You have lost your face. To a Korean, that is the worst possible thing. You may even find yourself wishing to take your own life.
Steve: Why do you always go to suicide?
Ok Cha: Because I was raised right!

Ha! Really brings back all those conversations with my mom where she suggested I kill myself! Wait, I don't remember those. Because they never happened. Later Steve's mom advises him, "You have to hide your emotions ... squeeze them into a hard little ball." Okay, that I can relate to, but I've also heard a similar (and better) joke on most of the sitcoms I've ever watched. Homer's advice to Lisa in the "Wacking Day" episode of The Simpsons comes to mind: "Yes, honey ... Just squeeze your rage up into a bitter little ball and release it at an appropriate time, like that day I hit the referee with the whiskey bottle." Now THAT'S comedy. 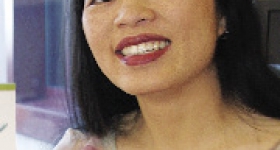