photo of Tina Craig, from the Wall Street Journal

The fashion blogger pose. Some of you
are already snickering and others are drawing a blank, but if you have a
Facebook account, ever shopped on Etsy, ever followed or created a
fashion-related Pinterest board, or flipped through the Style section of a
major newspaper recently, chances are you’ve seen one.

While
there is no single definitive fashion
blogger pose, there is a loosely bound set of gestures and postures idiosyncratic
to fashion bloggers and their subjects. Some of the most recognizable body
stylings include vulnerable-looking stances, oblique glances, and a single hand
on the hip (the teapot), or both hands on hips (the sugar bowl).

photos from This Time Tomorrow, Miss Whoever You Are, Scent of Obsession, Wendy's Lookbook, That Angel Girl

These
conventions pepper the pages of street-style and personal-style blogs, but you’ll
also find them in other spheres of social media and traditional media. Seeing Facebook photos of friends,
family, or colleagues striking a fashion
blogger pose? This happens more times than I can count, which suggests that
fashion blogger poses have become part of the everyday body language of social
media users. But where do fashion blogger poses
come from, and what do their aesthetics mean? For all their ubiquity, no one’s
really bothered to find out -- largely because (as I argue in my book on race,
gender, and fashion blogs), they’re widely viewed as trivial aesthetics,
performed by a class of trifling “girls,” engaged in a superficial cultural
sphere. (Even if you mock these poses lovingly,
you’re tacitly endorsing that dismissive perspective). And yet these aesthetics
are not trivial at all when we consider how their kinesthetics reflect the
social and economic worlds from which they emerge and in which they circulate.

We can thank
British Chinese blogger Susanna Lau (aka Susie Bubble) for first striking the
pose. She’s not the first ever personal style blogger; that title belongs to
Bryan Yambao, a queer Filipino man who began blogging in 2004 under the nom de
blog BryanBoy. (He has a brand-name pose, too.) But traces of Lau’s signature
pose are everywhere. “The Susie Bubble” is characterized by a cross-legged or
pigeon-toed (feet turned inward) stance, one or both hands placed on the front
of the hips, and eyes directed anywhere but at the camera (what I call the “elsewhere
gaze”). While some bloggers
openly attribute their kinesthetic style to Lau, many others quote all or part
of her pose without acknowledging (and perhaps without knowing) their aesthetic
referent.

The elsewhere gaze is one of
the most distinctive and recurring features of fashion blogger poses. Tracing its
history leads us to an early post on Lau’s Style
Bubble blog. In this 2007 post, she confesses, “Let’s just say me and my looks aren’t exactly
best friends. Being taunted for being ugly at school didn’t help.” The racial
significance of this statement becomes clearer in a later blog post, in which
her eyes as well as most of her face are crossed out. In fact, her eyes, the
visible sign (and stigma) of Asian difference, are almost always hidden. As she
explains it, her blog is “an open invite to view my love of fashion and how I
express that in my style.” However, she implores in the same post, “‘Look at
the outfit... not the face...’”

In the early days
of her blog, the camera Lau used (in front of a mirror) was always positioned
in front of her face. (BryanBoy, by contrast, always positioned his camera by
his chest, leaving his face fully visible.) Later, in photos using a tripod,
she digitally inserted X-es over her eyes. By 2007, when her boyfriend and
fellow fashion blogger Steve Salter (Style
Salvage) began photographing her, she found more creative ways of hiding
her eyes with her hair, accessories, and eventually that elsewhere gaze. These
strategic positionings made certain that we
could gaze anywhere but her face.

My point isn’t
that the elsewhere gaze is intrinsically “Asian.” But born out of an experience
of racial ambivalence, Lau’s bodily discomfort shows that race hasn’t
disappeared from the social media universe; it has instead materialized as
aesthetic style and practice.

To be sure, Lau’s
demurely downcast gaze has a racial history that precedes her and the invention
of the fashion blog. It has long been a part of the visual idiom of Orientalist
femininity, reiterated countlessly in the Lotus Blossom/China Doll/Geisha
stereotypes. Yet within fashion bloggers’ “vocabulary of movements,” this same
aesthetic of femininity may not mean the same passivity. Consider that, in the
current historical moment, “feminine” skills of communication, care and
consumerism are what’s crucial to social media economies. What this aesthetic
may be performing, then, is a surprising symbolic inversion of power.

But it’s not just
women who are becoming ever more important in new global economies. In the
current fashion media complex, Asians are being recognized as influential
producers and consumers of fashion. In the last ten years, we’ve seen a near-constant
stream of stories about Asian luxury consumers. As huge
economic challenges in the US and Europe greatly diminished the economic power
of traditional luxury markets in the West, the fashion industry turned to sites
of massive economic growth in China and India, but also in South Korea,
Hong Kong, Taiwan, Singapore, Malaysia, Thailand, the Philippines, and
Indonesia. Hoping to “boost their brands in a region that has become the
fastest growing market for luxury goods,” companies like Prada, Salvatore
Ferragamo, and Jimmy Choo launched IPOs in the Hong Kong Stock Exchange. Across the
fashion spectrum -- from Gucci to Gap, Louis Vuitton to Levi’s -- companies have
opened hundreds of stores in China since 2009, while closing as many in the US.
The luxury fashion consumer that the New York Times insists is “the rest
of the world’s . . . best hopes for future economic growth” is Asian (and
tacitly, female).  (As of December 12,
2012, that hope seems to have been realized. A Bloomberg headline declares, “Chinese
Shoppers Overtake US as Top Luxury Buyers.”)

The rising
influence of Asian luxury consumers has also increased bookings of Asian
models. As Ivan
Bart of IMG Models Worldwide explains: “It comes down to getting consumers
to come to your brand. You have to have faces that reflect the consumer.” And like
Asian models, Asian bloggers are fast becoming the face of the ideal consumer.
Bloggers like Lau and Yambao are the new style ambassadors -- and authorities
-- of fashion. Their styles of embodiment -- far from expressing passivity and
powerlessness -- are today the corporeal expressions of knowledge, power, and
expertise in fashion.

This is not how
expertise and power traditionally “look” in body language. Unlike masculinist
power stances that are typically wide and imposing (designed to take up more
physical and social space), the tapered stances of fashion bloggers create the
illusion of a smaller body. Placing their hands on the front of rather than
square on the hips (as is typical in the masculine power stance), bloggers
highlight the triceps and accentuate the clavicle for the visual effect of
slender arms and a thinner body. In making the body look smaller, more toned,
and (implicitly) younger, fashion blogger poses do abide by dominant standards
of feminine beauty. But even while fashion’s fetishization of feminine
smallness continues to trouble women’s relationships with their bodies, it would
be a gross oversimplification to see fashion blogger poses as merely the
self-oppressive acts of young women. Fashion bloggers
create spaces for dialogue that are crucial for doing business in today’s “thank
you economy,” one in which “[t]he
ability to digitally listen, respond and nurture a one-to-one relationship with
the consumer is going to transform the way companies do business. Success will
come through ‘outcaring everyone.’” Body language is part of this. Hands on
the front of the hips create a welcoming stance, since the body naturally leans
forward into the camera, inviting digital dialogue. Describing the significance
of social media’s new role in the industry, fashion journalist Suzy Menkes
says, “the
world changed when fashion instead of being a monologue, became a
conversation.”

Today,
elite Asian bloggers are key participants in this conversation. Their influence
is visible in the global popularity of poses like the Susie Bubble and the
BryanBoy. And while these personal brands suggest that Lau and Yambao’s social
influences are unique or exceptional, understanding the racial moment of their popularity
reveals the structural conditions that make their influence possible. (For more
on that, see here.)
In the Susie Bubble and all its iterations, we see new relations of race,
gender and expertise in the global economies of fashion being enacted.

Minh-Ha T. Pham is an assistant professor in the History of Art
& Visual Studies Department and the Asian American Studies Program at
Cornell University. She’s completing a book that examines personal style blogs
and the political, social, and aesthetic arrangements of race, gender, and
expertise in social media’s economy of "DIY capitalism." Her writing has been
published in a wide array of forums, from academic journals to popular and
political magazines, and her research has appeared in the New York Times,
Wall Street Journal, The Nation, NPR, San Francisco
Chronicle, the Chronicle of Higher Education, Hyphen,
and WNYC. She is a blogger for the Huffington
Post Style section, cofounder of a research blog on the
politics of fashion called Threadbared, and curator of a digital archive of
the fashion histories of US women of color called Of Another Fashion. 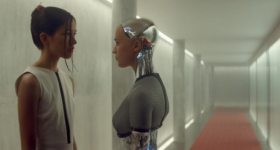 monkeyrotica wrote on Thu, 01/03/2013 - 9:30am
Haven't these poses been used for decades in fashion magazines? I distinctly recall a series in Vogue on Audrey Hepburn in the late '50s where they were used.
P S wrote on Mon, 01/07/2013 - 10:33am
Although I understand your point about Susie Bubble and Bryanboy's being key contributors to the "fashion blogger pose," I would caution against crediting any one or two people to trends seen across social media and fashion at large. The pigeon toe stance has been a staple of Japanese street fashion/photography for as long there as been Japanese street fashion; and the vulnerable waif look/stance has always been utilized in fashion. And while fashion blogging can be empowering, I wonder about its more negative consequences in fostering competition, vanity/narcissism, and (still) narrow definition of beauty.