Sung Kang as JP and Monique Gabriela Curnen as May in Sunset Stories.

In Sunset Stories -- the first feature from internet collective You Offend Me, You Offend My Family -- co-directors Ernesto Foronda and Silas Howard give the Los Angeles ensemble genre a relationship comedy twist. LA and its quirky denizens have prominent roles in this story of two former lovers randomly thrown back into each other's lives for 24 hectic hours.

May (The Dark Knight's Monique Gabriela Curnen) is a dedicated nurse and control freak who works with cancer-stricken youth in a Boston hospital. A job assignment takes her to LA to pick up a cooler full of life-saving tissue and of all the hotels in the city, she's staying in the one where her jilted former fiancé JP (Fast and Furious's Sung Kang) is playing a wedding gig with his band. While May tries to recover from the awkward run-in, a skeevy hotel bar patron (Humpday's Joshua Leonard) jacks her cooler, kicking off May and JP's wild goose chase through the streets of LA and their own journey to exorcise their own personal baggage that led to their breakup.

The ever-moving cooler -- which is constantly being re-stolen or reclaimed by a new pair of hands -- is a tad unbelievable as a desirable item for thieves and ne'er-do-wells (Is this cooler encrusted in diamonds? Is cocaine spilling out of it?) and serves as a pat plot device used to connect the film's characters and push the narrative along. But, it's a minor flaw for the film which gets its boost from strong performances and clever cameos from Saving Face's Michelle Krusiec, Lost's Harold Perrineau, The Big Bang Theory's Jim Parsons, and Girls' Zosia Mamet.

Though I wish May and JP had been fleshed out more -- the uptight female/laidback male dichotomy got distracting at times -- Curnen and Kang give expressive, likable performances and share a natural chemistry. And the script's more contemplative scenes -- the various characters' loneliness, fear of success, acceptance of failure -- are balanced by some moments crack comic timing (Mousa
Kraish's scene as a struggling actor at a disastrous audition was a personal favorite of mine).

Sunset Stories smartly eschews traditional rom-com tropes and -- despite the whimsy of chasing down weirdos through LA and serendipitous reunions -- is a film grounded in reality: sometimes it's less about being in love and more about getting your shit together. 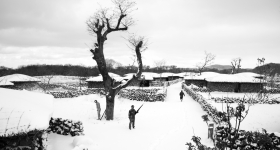