High Tech, Low Life, directed by Stephen Maing, is a documentary trailing two of the first citizen journalists and bloggers in China. Although they may use the same media -- blogs, digital photos and video, social media, texts -- they stand firmly in different generations, providing two distinct perspectives on the role of new media in China.

The awesomely monikered Tiger Temple is a fifty-seven-year-old roving blogger in Beijing, who traverses thousands of miles in the Chinese countryside on his bike to root out stories of injustice and the struggles of the underprivileged. Living alone with an adorable cat named Mongolia, Tiger Temple looks like he stepped right out of the 1960s, with his shoulder length hair and talk of “speaking the truth” until he dies. And indeed, he is an old-school, shoe leather journalist, albeit one using new media platforms.

Twenty-seven-year-old Zhou Shuguang (nom de blog Zola) is a vegetable hawker from Hunan Province, who represents the self-promoting Generation Y: he basks in the attention he receives for his work and is no stranger to the selfie (he also inexplicably has a flag with his face screen-printed on it). He later argues (ambiguously tongue-in-cheek) that the individual should come before the country -- a clear departure from the philosophies of his parents and their generation, who believed that first comes the family and then the “Big Family,” or the government. Although it’s clear he thinks he’s kind of a big deal, his parents are less convinced and continue to pray for him to find a wife and hope he’ll pitch in more with the hard labor around the house.

The juxtaposition between the two is compelling and thought-provoking, providing a look at the evolving citizen journalism landscape in China especially in comparison to the oft-decried “decline of journalism” in the United States. Just as the 2012 documentary Ai Weiwei: Never Sorry was a reminder of the subversive and society-altering power of art today in countries like China, High Tech, Low Life’s inspiring tale of these first-wave journalists utilizing nascent media is an important reminder that the media really does matter in some places; it’s more than a punchline, as it often feels like here in the US. That old chestnut about journalism’s role of afflicting the comfortable and comforting the afflicted? In China, it’s not a quaint idea of a bygone era -- it’s a professional cri de coeur.

Even more, it’s a rare depiction of real, crusading Asian journalists in action (even if “action” is broadly defined as typing with a cat on your lap or sleeping in a tent on the beach after getting into an argument with your parents). There is something powerful about seeing that imagery, perhaps even on just a subconscious level, as it’s rarely glimpsed here in the Western media (Asian reporter Trisha Takanawa notwithstanding).

The documentary is a mere tantalizing hint of the wide world of bloggers in China -- I left wondering about the women bloggers, as well as the bloggers on less serious subjects (The Onion of China?). This is obviously a topic that will be mined in future films, but High Tech, Low Life is a commendable start to setting the scene. 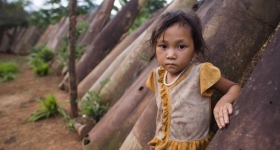