Welcome to Hyphen’s The H-spot column, where Hyphen drops mad knowledge on readers’ questions about the nasty and other prurient delights. Our experts consist of sex goddess Nadia Cho, intrepid medical doctors Monica Hahn and Dharushana Muthulingam, and diva extraordinaire Barbie. Each week, we’ll feature questions that cover health, LGBTQ, and various other burning topics that our prudish parents would disown us from asking.

Feel free to send over more sex questions to Abigail Licad, our fledgling editor-assassin of all things repressed and taboo, at abigail.licad[at]hyphenmagazine.com.

Ready to straighten out the kinks in our thoughts on sex and sexuality?  Let’s do it!

Why do some men and women like giving head so much? I understand
why people like receiving, but why give if your partner doesn’t really ask for
it?  It’s a lot of work, and then after
10-20 minutes, your jaw gets sore!  Please
explain.

Some people like giving head because they just do. Others may like giving
head because they like the taste, the texture, the sensation or because they
enjoy pleasuring their partners. Giving head isn’t a grueling, laborious chore
for everybody but if you don’t personally like it, that’s fine and no one
should pressure you to do something you don’t want to do. Just remember, don’t
yuck anyone’s yum. We all like different things and it’s important to be
respectful and nonjudgmental of the preferences of others, particularly sensitive
ones concerning sex. Your preferences also change with time and depending on
the person, so don’t close yourself off to something just because you don’t
enjoy it right now.

Nadia Cho is an undergrad at UC
Berkeley majoring in psychology, with strong interests in sociology, Asian
American Studies and gender and women’s studies. She was a Sex on Tuesday
columnist at UC Berkeley’s student paper The
Daily Californian. She continues teach sex positive thinking and living at
her blog nadiacho.com. Her
hobbies include drinking coffee, playing with cats and being sassy. She
secretly loves Tumblr and kale.

Sex aphrodisiacs -- are they for real? Can they really enhance enjoyment and performance during sex?

--Say No to Viagra

Over several millennia, different foods, potions and pharmaceuticals have been touted to improve components of sexual activity such as libido (sexual desire), sexual potency (usually the effectiveness of erection),  sexual pleasure, as well as fertility (both conception and contraception). But do they really work?

There is some evidence that these herbs have potential to spice things up between the sheets. Studies of ginseng in animal subjects, for example, show promise as treatment for erectile dysfunction, by affecting the release of tissue signals in both the genitals and the brain.There also have been a few preliminary studies showing promise of ginseng as an effective libido-booster in menopausal women and as a treatment for erectile dysfunction in men.  However, a recent major review of literature on the effect of many plant-based aphrodisacs including ginseng, shows insufficient evidence for enhancing sexual function in either men or women. Larger and more rigorous studies are needed before anyone can say for sure if any of these herbs are the real deal.

Sorry to let you down, SNtV, but overall, there is no solid supporting evidence that any known natural aphrodisiac enhances of sexual desire or potency, at least for now.  So in the meantime, while the search for an effective aphrodisiac continues, you can’t go wrong by consuming a balanced, healthy diet (preferably free of deadly toxins) that keeps you fit and feeling sexy. After all, self-confidence is the greatest aphrodisiac of all in our eyes!

Monica Hahn (L) is a resident physician at the UCSF Family and Community Medicine Residency at San Francisco General Hospital.  She received her MD from UCSF School of Medicine and her MPH from the UC Berkeley School of Public Health.  She has been involved in community-based youth empowerment advocacy, as well as HIV prevention projects.  She is currently interested in adolescent health, HIV prevention and sexual health. She enjoys capoeira, Afro-Latin dance, and Brazilian percussion.

Dharushana Muthulingam (R) is a resident physician in the department of Internal Medicine of the Kaiser Medical Center in Oakland. She studied medicine at UCSF and public health at UC Berkeley.  She is interested in infectious disease, healthy aging, health justice and working with patients to live the good and flourishing life. In her spare time, she has been attempting to read David Foster Wallace's Infinite Jest. After two years, she is happy to report she is almost half way done.

My bff's ex asked
me out. I'm new again to the singles scene and my community is small. Should I go for it?

First of all, I understand your curiosity
to date who's out there. However, before making a decision, you must be
sure that you are more than slightly interested in your BFF's ex.

Is this person worth compromising
your loyalty to and sacrificing your relationship with your best friend?

Ask your friend how they feel about
the idea. Pay close attention to how your friend answers to make sure that they
are being truthful. If your BFF gives her ok to date the ex, avoid comparisons
and do not gloat if your relationship with the ex proves more successful. That would
be horribly tacky and hurtful to your friend.

Additionally, prepare to for any unsolicited
advice or expressions of concern that your caring friend might offer.

Finally, consider the possibility
that the ex might be using you to get back at your friend, especially if feelings
still run high between them. Always be mindful that what goes around, comes
around.

Barbie is your sister and pal in all things love and taboo. NYC-based, she loves long walks on city streets, watching sunsets over the river, farming and looking for the next big thing. She's your wellness connector, media maker, and fellow troublemaker. She loves her food homestyle, hands down. If you're ever in NYC, look her up to chat and chew. 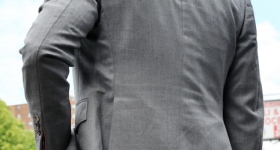