On Saturday, my mom and I took my girls to the mecca of American excess: the American Girl store at The Grove in Los Angeles. Replete with a doll salon and personal shoppers, there was plenty to wring my hands over: the endless selection of actual human girl/doll girl matching outfits, the doll beds that may as well cost as much as real beds, the Bitty Twins line of dolls that are $50 each (but you're really supposed to buy them as a set), the Hollywood executive progeny crowded inside the store. The husband and I gifted our big kid with the Cecile doll for her birthday recently (it was 60% off!), and my mom wanted to give her the American Girl experience. I wasn't inclined to be an asshole about it -- it really was my own childhood dream come true -- but I didn't want to let the kiddo or the grandma get too carried away either, so we set a budget of $50 and let her pick what she wanted.

I had hoped for a long time that my kids wouldn't be into dolls, but once Big Kid got to preschool and had a group of other girls to play with, it kind of took off. I'm sure there are folks out there who would judge us for not flat out forbidding dolls altogether, but instead of planting the seeds for an unhealthy obsession with what she couldn't have, we opted to set guidelines on the dolls we'd buy her. As white dolls are ubiquitous and sort of considered the "blank slate" (in that most people assume white dolls are a safe gift for all girls), we only spend our own money on dolls of color.

Now, this is not the kind of daunting task it was when I was her age. All of my dolls were white, from Rainbow Brite to my beloved ginger Cabbage Patch Kid. Asian/Asian American dolls were impossible to find, except maybe collector's editions decked out in a qipao or kimono. Anyway, all I wanted were white dolls -- even though the vaguely Latina Barbie, Teresa, almost had the same name as me and matching hair -- I really only coveted the blond-haired, blue-eyed Barbie. She was the one with the mansion and the pink convertible and all the cool careers, and Teresa was just the party guest, after all.

The objective wasn't necessarily to have my kid play with a doll that was just like her. I really just wanted to get away from the idea that there was only one doll-worthy look. I just want her to be able to play with dolls that come from similar backgrounds as she and her own friends, or at least dolls with compelling backstories. The point, really, was to at least avoid the "The only pretty dolls are blonde-haired and blue-eyed, so I must not be pretty if I'm not blonde-haired or blue-eyed" mentality of yore.

Most of the dolls my kid has are from her favorite movies and are of the stronger Disney princess ilk, like Mulan and Tiana. And Cecile, her first American Girl doll, is apparently a free girl of color coming up in pre-Civil War New Orleans. Granted, none of these are perfect representations of strong women of color, and I think we should always demand more. But by at least having a wider selection of dolls to choose from, we're moving in the right-ish direction.

For all its consumerism and ridonkulous doll hook-ups, I'd like to credit American Girl with pushing this idea of having a doll who's just like you. No fantasizing about luxury cars with custom paint jobs, no boyfriend dolls, no Aryan anatomic impossibilities, no multiple careers all done in high heels. You can go to the American Girl store and find a doll off the shelf that has a similar skin shade, hair style, and eye color as your kid, and customize her with glasses, kicks, a skateboard, a menorah, and/or a baby grand piano.

I mean, I don't really know if outfitting a doll with $50 mini-cello is much better than a 3-story doll mansion for Barbie, but isn't wanting a doll that looks like you (or even wanting a doll outside of the Eurocentric beauty standard) a heck of a lot better than wanting to look like a doll?

Even when we let the Big Kid loose in the store and my mom changed her terms and gave the option of buying her an entirely new doll, she really wanted to stick with Cecile. And the accessory she had her heart set on? A shiny new wheelchair.

But that might be another story for another day. 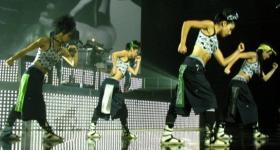 Anonymous wrote on Sat, 01/12/2013 - 9:06am
Cabbage Patch Kids have always offered both white and black skin and soon included all the enthnicities, including Asian-American and Hispanic. Check out cabbagepatchkids.com.
susan wrote on Mon, 01/14/2013 - 3:17am
Four years ago and with my four children in tow, we stumbled across this mecca. We were having breakfast in the Farmers' Market in LA and couldn't help but notice the sea of red boxes being hauled around by miniature versions of their mothers. This was our first encounter with American Girl Dolls. We were so overwhelmed that we started believing we must be missing out on something quite special. Upon asking passersby what on earth was going on, we were glared at with especially quizzical faces and informed that these parcels, of course, contained American Girl Dolls. Lured to the immense building by our curiosity, I found myself immersed in a culture with which I had no knowledge and little interest however, my daughters went wild. I am the only child to older parents. My father was particularly careful to break the mould in all situations. I grew up playing with trucks and model trains and he taught me to use every tool in his shed and made me understand the mechanics of engines and rudimentary car care by age 6. I hated dolls but remember an uncle gave me one called Giggles who hideously laughed when you squeezed her arms together. My father returned it as it didn't look "normal"and he replaced it with a darker skinned boy doll which I still have to this day.We are now the proud owners of 7 American Girl Dolls and a set of twins, all of varying colours and periods in history but I will never quite get over the supercilious 'just like me' mothers, daughters and dolls who were parading around the store, similarly attired, that first trip to LA.