You thought you were having fun last month at New York Comic
Con when you and your film crew gained access to the convention using your job
credentials at SiriusXM Radio. You thought this would be a great opportunity to
provide footage for your YouTube show (now defunct, thankfully). You thought it
would make great television to pull me aside, to put your mic in my face, to
drive your camera's light in my eyes and to ask if you could buy me.

You thought it was just a joke when you said you wanted to
buy an umbrella with an Asian girl -- because I was holding a parasol.

You thought you were being clever by mistaking me for a
geisha girl, like the many submissive, diminutive women you've seen on TV or on
the Internet or in movies.

You thought that because I was small and female and Asian,
it gave you the right to ridicule my existence.

Well, this letter isn't for your sake, Mr. Babchik, but for
the sake of my childhood, where everyone only told me one story about being a Vietnamese
woman, a woman like me. The nasal screech of “Me love you long time!” set to a
rap beat. Miss Saigon's little Kim forever pining after her American solider to
save her. Robert Olen Butler won a Pulitzer for writing stories about war
refugees, but also wrote a book where a Vietnamese – American boy thought his
absent mother must be “whoring herself up and down the East Coast.” In the
movies, Chris Farley got attacked by the “Saigon whore that bit his nose off”
but I was the only one who didn't laugh.

This letter isn't for your sake, Mr. Babchik, but for the
sake of my mother and my aunts and my grandmothers and my cousins. My family
comes from a country you probably have never seen outside of Apocalypse Now
and Full Metal Jacket. My family is from the city of Saigon.

My grandmothers moved to Saigon when they were young mothers
and helped save their families from marching death. They never shot themselves
like Kim did in order to give their children a better life.

My mother was born in Saigon. She never walked the streets
in front of American soldiers, asking for sucky-sucky for a fifty.

My father's sisters lived in Saigon. They went to the United
States and got PhDs because my grandfather wanted to give them the best
education possible (you probably thought Vietnamese women are all rice farmers
when we aren't being whores).

One of my aunties was one of the last people to leave
Saigon. She jumped aboard the final departing helicopter, clinging to the
landing skids until they could pull her inside.

This is what it means to be a Vietnamese woman to me: to be
brave and strong and intelligent and able to fight to maintain her dignity.

This letter isn't for your sake, Mr. Babchik, but for the
sake of so many women who look like me and suffer from actions that take away
our humanity in your eyes.  You aren't
there when I avoid the girls at conventions who play at geisha in mini kimono
robes and paste caked on their pale faces. You aren't there when my younger
sister wonders if she is loved for who she is and not for what she represents.
You aren't there when I am comforting my friend as she sobs about the man who
made her suck his cock though she didn't want to.

I accepted an apology representatives from Man Banter made in your name, Mr.
Babchik: a remorseful cry from bullies who knew they have been caught. But your
colleagues' panicked emails will not make me accept the idea that you could buy
me as a cheap joke, because so many of my fellow Asian sisters live their lives
with the fear that they are nothing but things to be sold and used and
discarded.

This notion cycles itself over and over again in today's
culture, like loops of film spinning on a reel, like a rap song on repeat.
These stories get repeated until they snowball into an illusion of truth that
crushes living hearts and bodies and spirits beneath their weight.

I am writing this letter to tell this to you, Mr. Babchik,
and everyone who thinks like you: I will not be bought by your remorse or your
shame-filled Internet silence or your own fleeced sense of self-preservation
after you said those words to me.

Not because the costs are too high.

But because I was never for sale.

You can read Diana's full account of convention harassment at
New York Comic Con on her tumblr here. 18MillionRising.org is
currently hosting a petition to have Mike Babchik's employer, SiriusXM Radio,
be held accountable for his harassment of Diana and other women. Diana M. Pho is a scholar, activist, blogger,
and performer, who is also known as Ay-leen the Peacemaker in the international
steampunk community. She is the founding editor of the award-winning
multicultural steampunk blog Beyond Victoriana and also
blogs for Tor.com. 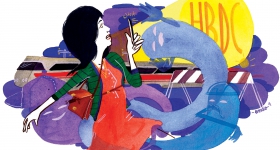