Jessica's hair looks even better than before

Another quick one on last week's shows, dudes -- but I have a good feeling about what this week will offer with the return of The Voice (already?! I know).

Sung dropped a couple more Sung-ian gems on Monday Mornings this week when he was forced to perform surgery on a man who everyone agreed was brain dead. To avoid legal retribution from the man's sister who demanded the surgery, Sung took to the OR despite insisting, "Surgery futile. Cannot fix." How could anyone doubt so eloquent an argument, right? Once he opened up the patient's skull and saw how hopeless the situation was, he walked away. This time his explanation was, "Not do, not ethical, not apologize." You know what new thing I realized is weird about Sung's dialogue, along with the one million other things? For a man who is so meticulous about so many things, he has neither self-consciousness about his clumsy speech nor any apparent desire to make it more precise. Now, this could be chalked up to his lack of emotional connection with others, but that's just a shot in the dark. How about he get a little more development as a human, hm? All the other characters have shown bits of their tender personal underbellies, yet Sung's gotten only a two-second flash of his (I assume) wife and daughter and nothing else. Dr. Sung is basically a robot

Dr. Napur, on the other hand, has a little more explanation behind her social abruptness. At a coffee shop, she met a young couple with a happy, giggling baby. However, when she learned that the girl was only ten weeks old, she realized that something was wrong -- children don't develop the ability to laugh until later. Of course she explained this in the harshest, scariest way possible. She brought them to Chelsea General, where it was discovered that the baby had a tumor that needed to be removed. All was well in the end, but I can't help but slap my forehead at how absurd it would be for a complete stranger (she wasn't even in scrubs or anything) to say, "Your baby ain't right" within seconds of meeting you. But then, it's believable I guess that Napur would say that because we've seen her single-minded, medicine-above-all-else attitude before. She's also developing a weird habit of finding patients during off-hours, but that's a different issue. Anyway, can Sung get just a smidge of the personality development that his colleagues get?

American Idol's results show featured a visit from last year's runner-up Jessica Sanchez, who caught everyone up on what she's been doing since the show. Besides the Idol tour, she also performed at the Democratic National Convention, modeled for billboards, appeared in Seventeen Magazine, filmed a guest spot on Glee, and sold out her first solo concert, which was in Manila (Jessica's mother is from the Philippines). Not too shabby, Jess! She has a new album coming out soon called Me, You & the Music, and she performed the song "Tonight" with Ne-Yo on the Idol stage. She's got some new dance moves, too! I'm happy to say that our Jessica totally seems like a full-on pop star. 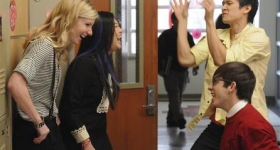