I'm thirty years old and have been watching TV for a pretty long time, and I feel fully confident in saying this has the best season of all time for hot Asian American men. To complement Dianne's Hyphen TV column, I made a short list of favorites. This season I've religiously watched three shows in particular, and all of them have featured pretty attractive Asian American guys -- all getting the girl.

The Walking Dead is the most obvious and most loved of the bunch. Glenn and Maggie had already gotten together by the end of Season 2, but this year we saw a lot more of Glenn being a dude's dude, wanting to protect his lady and take on more of a leadership role. Yes, at times it gets totally archaic -- something that's continually pissed me off about the show -- but to be fair, I'm pretty sure this is the first time a hot, rugged Korean dude got to be a hero on a wildly popular drama (last week's season finale actually broke records). And aside from the Governor hooking up with Andrea, Glenn is also the only guy who got any action this season.

Another new favorite of mine that seemed tragically slept on was The Neighbors. For those of you who haven't seen the show, a regular old New Jersey family moves from Bayonne to a planned community full of aliens disguised as human beings. I know, it sounds totally stupid, but aside from it being one of the more hilarious sitcoms in recent memory, the show made a lot of bold, intelligent statements on race and gender. For example, the episode, "The Back Nine," goes deeper into issues of white privilege and tokenism than I'd ever seen any other sitcom go. Tim Jo plays Reggie Jackson, the teenage alien living next door to the Weavers, who eventually becomes the love interest of the Weavers' Daria-like teenage daughter, Amber. Unlike Glenn Rhee of The Walking Dead, Reggie Jackson is clean cut and soft-spoken. I feel weird saying this about a high school character, but I think Reggie brought a refreshing and much-needed brand of sexy to television: he was a genuinely nice guy who respected Amber's boundaries. He communicated his feelings for Amber in a mature and assertive way, but generally backed off when she didn't reciprocate those feelings. In the season finale, they finally kiss, and it's independent of any crazy schemes to win Amber's affection. It was adorable, but refreshingly devoid of the romcom creepiness.

In the critical darling, Go On, John Cho plays Steven, the best friend and producer for sports radio personality Ryan King (played by Matthew Perry). I know nobody needs me to validate that John Cho is, indeed, hot, but it was great to see an Asian American dude play The Hot Guy. There's a great moment in the season where Steven comments on Long Duk Dong being a racist character. There's definitely something happening between Steven and Lauren, the head of Ryan's support group, and I can't wait to see what happens.

Some honorable mentions include The Mindy Project and Community. I have been obsessed with the former since its series premiere last fall. I have been a little disappointed by the fact that all of her love interests have been white so far (played by Ed Helms, Mark Duplass, Seth Rogen, Josh Meyers, BJ Novak, and Anders Holm, who have made every episode hilarious so it's hard to fault her), but she does have Pitch Perfect's Utkarsh Ambudkar playing her brother, Rishi. And while I know it's hanging on by a thread, Community has been one of my top five shows since it began, and it's nice to see Abed finally getting a girl in all his weird, obsessive glory.

This has been a great season for hot APIA guys and fans of hot APIA guys. Definitely a step in the right direction for television, and I'm looking forward to more next season! 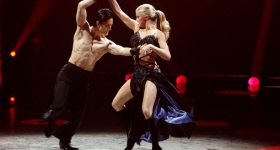 mamazilla wrote on Thu, 04/11/2013 - 3:27pm
the writing may not be all that earth shattering, but i have to say that hawaii 5-0 never fails to bring on the asian american hotties.... daniel dae kim plays chin ho as part of the main cast. and daniel henney, will yun lee and ian anthony dale play secondary characters with recurring roles. it's a lovely way to spend monday nights! ;)
spychik wrote on Thu, 04/11/2013 - 7:34pm
An article on hot Asian American actors that doesn't bring up Hawaii Five-O, a wealth of Asian-Am man hotness?!!! It's a given we all love Daniel Dae Lewis, but throw in Brian Yang, Will Yun Lee, Mark Dacascos, Daniel Henney, etc. and it's the motherlode!
Theresa Celebra... wrote on Fri, 04/12/2013 - 6:56pm

I actually didn't include Hawaii Five-O because I've never seen it (I don't think it's on Hulu.) But something tells me I definitely need to hunt down a stream of it!