In this week's Monday Mornings, we found out that Dr. Park, in addition to being a big classical music buff, is also a connoisseur of good writing. He and Dr. Ridgeway encountered a patient who had an uncontrollable need to write -- after his paper and laptop were taken away, he wrote on walls, toilet peper, and even his own body -- caused by a tumor. When the patient refused surgery, afraid that he would lose his storytelling gift, Dr. Ridgeway was horrified at the potentially dangerous decision (the patient was also suffering from seizures due to the tumor). But, Dr. Park took the surprising stance of being on the patient's side.

When grilled about his position by Dr. Hooten at the Monday morning meeting, Dr. Park was resolute. "Writer want write, surgery possible take away creativity," Park explained. He went on to rattle off a list of writers and artists who also suffered from seizures, epilepsy, and other conditions: Charles Dickens, Dostoyevsky, Lewis Carroll, Edgar Allen Poe, Lord Byron, Van Gogh, Picasso, Michaelangelo...the show gave Park quite the screen time to show his cultural awareness. While there are certainly many people who connect more with art and artists than their fellow human beings, this still reads to me as yet more odd contrast and not depth of character. Is the man who can conjure these names without hesitation the same one who had to learn how to say "I'm so sorry the patient died" from a website? I will admit that his impassioned beliefs are stirring to see: "Who me to say no? Who you...He writer. Let be." But isn't it still jarring to see lofty ideals expressed in such a clunky way?

On Project Runway, we got to spend a little time with Tu again when he and four other eliminated contestants returned to aid the designers still in the running. Stanley chose Tu as his helper and immediately put his new assistant to work, demanding perfection in the most condescending way possible and acknowledging his inability to say "please" and "thank you" without apologizing for it. Throughout the episode, the other designers and assistants commented on how unrelenting Stanley was treating Tu, who seemed to be at the brink of tears when Stanley made him redo the same pieces over and over. Let's not even get into the uncomfortable parallels with actual garment factories in Tu's native Thailand (along with other parts of the world). Stanley took the win in the end, due in no small part to Tu's hard work, and it was a real bummer that we didn't get to see Tu bask in a little of the glory (or see a long-overdue thank you from Stanley). Kind of poor form, Runway. And terrible form from you, Stan. Conan was in Atlanta this past week, and since The Walking Dead films in the southern city, it was only natural for Steven Yeun to stop by. He regaled Conan with tales of facial hair (costar Lauren Cohan thought it made him look like "a French a-hole") and strip clubs (uh, those two things aren't related), and when he and Conan discussed how Steven grew up in Michigan, Conan surprised him with tickets to some basketball game that I guess people care about. That's nice! I hope you enjoy your sporting event, Steven!

The Colbert Report featured a visit from Victor Cha, former Director for Asian Affairs at the National Security Council and author of The Impossible State, an account of North Korea's history and future. Watch him educate the pseudo-pundit right here. 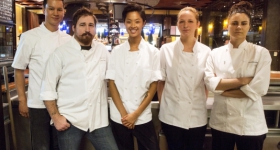 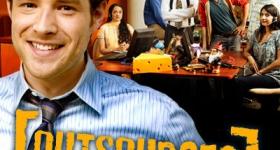