Tucked into the industrial backside of Potrero Hill in San
Francisco is an innocuous warehouse-like building painted a shade of beige so
colorless it easily blurs out of focus. This is the neutral background against
which I met half of the indie-folk-rock band Largesse. Sitting outside in the
designated smoking section of Secret Studios where the band rehearses, it’s easy
to see why Stanley Lam is the lead singer. A self-declared “ham,” Lam is endearingly
but regularly distracted by his own excitement and by the movements of those
walking from the parking lot where there congregates an increasing flurry of
cars, bikes, and people who appear just disheveled enough to be cool. He begrudgingly
explains, “I saw this word [Largesse] and I used to be several pounds heavier
and my name begins with an S,” says Lam. Hence, Largesse.

This offhanded playfulness between band members underplays
an intense passion for music and long history of trying to make it. Seng Chen,
the band’s percussionist (and Hyphen's former director of photography), explains that he "came from a classical background and
played brass winds but no one knows me as a brass wind player," which incites a
lighthearted tangent in our conversation about adding a tuba to the group, or a
sousaphone like the Hip Hop band the Roots. Like many musicians, every breath
and musical turn of phrase they hear reminds them of other bands, musicians or
instruments -- the more obscure the better. In our short conversation, Lam and
Chen casually strum through references from Steely Dan to Ned’s Atomic Dustbin,
or the Beatles, Sebadoh, Mud Honey, Jawbreaker, Yo-Yo Ma (bluegrass Yo-Yo Ma,
not classical Yo-Yo Ma) and the relationship between William Parker, William
Hooker and Dub Step, to name a few. Phew.

Largesse is primarily Lam’s project, created in 2000,
originally as a solo. While Lam may have been in other bands along the way,
Largesse has for the most part stayed active and definitely evolving. Over its
13-year history, Largesse has bounced between all kinds of formations
from a solo project to a group of four, back again and anything in between.
Largesse has seen numerous iterations before landing in its current arrangement.

Aside from Lam and Chen, Largesse also includes the band’s
bassist Atsushi Murase and rhythmic guitarist Seiko Takada; both also sing.
When describing each band member’s role, Lam laughingly reveals, “I’m the
singer in the band but Seiko is the best singer in the band. She does the best
singing for the band. Her voice is pretty damn … best.”

After Lam, Murase is Largesse’s oldest member and has been
involved for about eight years. Atsushi and Lam met 18 years ago when
they both first moved to the Bay Area from Long Island and Los Angeles,
respectively. The two eventually ended up in the same band, Scrabbel, “another
band people in the Bay Area think of when they think of Asian American bands.”
Lam exuberantly explains that he left Scrabbel and other like projects because
“singing was the most important thing for me. Because I love karaoke! And I
love being a ham. And I can’t play lead guitar so the only way I could be a ham
was to be lead singer.” Over the years, when the timing was right, Lam brought Murase
and then Takada, who he’d met through mutual friends, into Largesse.

As is typical in the Bay Area, there were many quiet and
unexpected notes that brought these musicians together. Lam and Chen met at
CAAMfest about two years ago. Surprising each other, the two begin to unravel
other connections among past bands they were in, mutual friends, music videos
and even a past Hyphen event. Stanley reflects, “It was just a matter of time
-- the Bay Area is one of those places if you stick around long enough you’re
going to meet each other, eventually.”

The band has always had singing, with varying levels of
focus, but with the addition of Takada there has been much more attention to
vocals and melody. Lam is hesitant to lock-down a distinct “sound” for the band.
He assures, “this is what I want this to sound like, I just can’t put it in
words.”  Yet, sheepishly, Lam describes
Largesse’s sound as “folky-rock with harmonies” inspired by anything from
nineties indie rock to blue grass. “When you have a free annual country and
folk festival, that stuff is going to bleed into you for sure.” In some ways,
San Francisco is a fifth band member, positioning myriad experiences, styles,
sounds and communities together into a chorus Lam keeps transposing.

Largesse will be performing at Hyphen’s PJ Soiree or
you can check out their music here: https://www.facebook.com/pages/Largesse/133438053348419 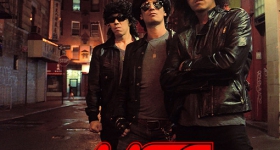 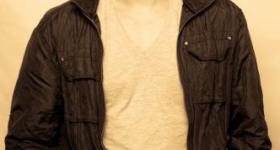