On a bright spring day, Little Bao
enters his village marketplace to watch the operas staged at the village fair.
These opera stories make him swell with pride and pleasure. When he sees his
father bring down a bully in the marketplace, Little Bao glorifies him as
"a hero they could compose operas about." However, when the bully
returns with a foreigner, who demands justice in the name of Jesus Christ for
his disciple, the villagers watch silently as the foreigner destroys one of
their sacred idols in retribution. In pursuit of justice, Bao's father seeks
out the Chinese officials, only to return beaten in body and spirit. And thus
begins the coming-of-age story of Little Bao, the heroic leader of the Society
of the Righteous and Harmonious Fist, who fight against Westerners and their
Chinese sympathizers in what became known as the Boxer Rebellion.

In the two-volume graphic novel Boxers and Saints, Gene Luen Yang crafts a heroic tale of this rebel group.
The story begins in Northern Shan-tung Province, China in 1894, where the
Northerners, impoverished by severe drought and economic turmoil, perceive the
increasing foreign presence in their region as threats to their dignity and way
of life. By 1899, these rebels have banned together, openly fighting against
the Western missionaries and Chinese Christian converts. They acquire the name
"Boxers" for their fierce adherence to physical rituals and their
assumptions that they hold god-like powers that can defy Western guns. In the
later years of their rebellion, the Boxers strike a tentative allegiance with
the weak Ch'ing government, temporarily gaining the protection of the Imperial
army that had previously fought against them. But when the Boxers descend on
the Legation Quarter, where Western diplomats, missionaries and Chinese
Christians have barricaded themselves, they are soon overwhelmed by a faction
of the Chinese Imperial forces that have joined the Western Eight-Nation
Alliance. By the summer of 1900, where Boxers
ends, the Society of Righteous and Harmonious Fist has been decimated. Boxers
uses
this history as the backdrop to the story of Bao. As a young boy, a dutiful
son, and an opera enthusiast, Bao watches others attempt to take on the
Imperial authority that continues to be cowed by the powerful Westerners. But
when his fellow villagers are captured and face execution, Bao can no longer
wait to grow up. Using his training and his belief in his gods, Bao unleashes
his powers, making his first killing. The final panel of this sequence of
actions ends with Bao, bloody sword in hand, looking nervous but standing his
ground, as his brothers bow deeply on their knees to their newly recognized
hero.

Given this narrative arc, Bao's story
could be a hero's journey. Instead, Yang complicates the story by raising
questions such as: Is Bao really a hero? Are all his actions heroic? Embodying
the spirit of Ch'in Shih-huang, the first emperor of China, Bao trains a legion
of brothers to fight to keep China free of "foreign devils." He sees
his place among the gods of his favored operas, and as such unleashes violence
against the Westerners, whom he sees as "foreign devils." But should
he also kill the Chinese Christians, whom he considers "secondary devils"?
His choice serves as a clarifying moment of the unusual choice Yang makes to
upend this comic book genre with the intersecting story of Saints.

The hero of Saints is Four-girl, named according to her birth order by her
negligent family. Four-girl recognizes she is an unwanted child. She knows that
she is a "devil" because that's what everyone calls her. As a known
"devil," Four-girl seeks out a place that welcomes her for her
"devil training," the church. At first, she goes for food but as she
learns to become a Christian she finds a place to belong. When her family beats
her after learning of her conversion, she joins the other missionaries to
spread the word of God. Her work leads her to the Legation Quarter, and this is
where the heroes' journeys of Boxers
and Saints converge. Heroism defines much of what happens in
comic books. The good guys fight the bad guys, and against the odds, the good
guys win. But what if these good guys are not really heroes because the bad
guys, well, are not so clearly bad?
The lines between hero and villain may depend on who tells the story. At the
Legation Quarter, when Four-girl sees Bao with his bloody sword, she asks
"So are you going to be a real hero now and untie me? I have orphans to
tend to."  But Bao fails to see her
version of heroism. Instead, he confronts Four-girl as a wrong-headed Chinese
convert, a "secondary devil." He demands, "Renounce your foreign
faith and I'll gladly untie you. Otherwise, I'll have to kill you." Who is
the hero in this confrontation? Is Four-Girl betraying China by following the
Christian faith? Is Bao forsaking China because of his relentless drive to kill
those not loyal to his vision of China?

As the story draws to an end, Yang shows
Bao as a morally complicated hero whose decisions expose the inevitable tragedy
of civil warfare. When Mei-wen, one of Bao's staunchest supporters, demands to
know why he must ruthlessly pursue death and destruction, he exclaims that it
is to preserve China. But she decries his excuse, wondering, "For China?!
What is China but a people and their stories?" In Boxers and Saints, Yang
adds to the legacy of stories about the heroes and villains heralding the long
history of China's uneasy engagement with the West. 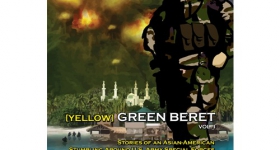 Books: The Military Gets a Humorous Spin 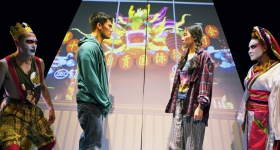 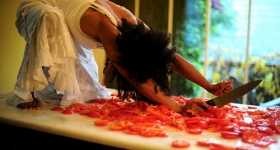