In 1919,
filmmaker D.W. Griffith premiered his film, Broken Blossoms. The film was based on a short story written in
1916 by Thomas Burke, charmingly titled, “The Chink and the
Child.” The story features a man from China named Cheng Huan who travels to
London to preach Buddhism. He befriends a young, pretty Caucasian girl, who has
an abusive father. In attempting to save her he inadvertently causes her death.
He then shoots her father, and, after that, kills himself.

Given
our modern day view of the stark racism inherent in Griffith’s work such as Birth of a Nation, it may come as a
surprise that he intended the film to counteract rampant fears about the
“Yellow Peril” that swept American media at the time. However, in
attempting to pay tribute to Chinese culture, Griffin created
several Orientalist images that have, unfortunately, stood the test of time.
Here is the white actor Richard
Barthelemess dressed up as Cheng Huan: 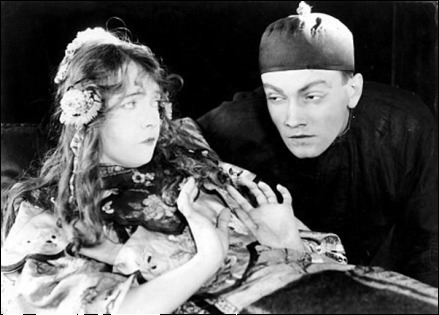 In the
film, Cheng Huan ambles around in a hunched over walk. He squints behind
already taped-back eyes. The film featured yellow-tinted color plates upon its
release. Barthelemess spends the film dressed in a mélange of random, miss-matched
Chinese clothing. He is addicted to opium.
Every character besides Lillian Gish’s Lucy hates him because he is Asian. Lucy
eventually comes around to liking him because she perceives he is too
effeminate and weak to be a threat. That is, until he shoots her father.

Fast
forward to 2014. THIS happened on a recent episode of CBS’s How I Met Your Mother: 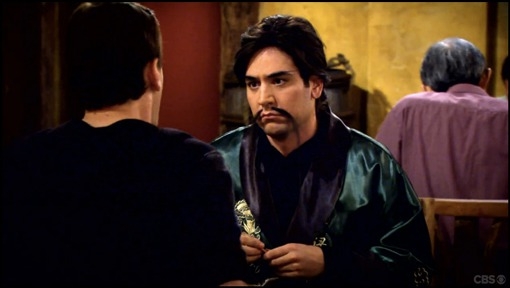 Almost
one hundred years after Broken Blossoms,
the ghost of Cheng Huan, and all he embodied, still haunts Asian American
representation in the media. When AAPIs complain, they are subjected to
the usual pushback -- accusations of being overly sensitive, of being the “PC
police,” and other such choice responses from those who accuse Asian Americans
of “not getting the joke.”

It took the HIYMYM creators several days to respond, spurred largely by the
#HowIMetYourRacism hashtag started by writer and activist Suey Park. You can
see Suey’s intial tweets and the subsequent #HowIMetYourRacism responses in
this Buzzfeed article. Park’s issues with the episode are
many, but she was still taken aback by the response to the hashtag.

“It wasn't just white men who were
shaming me for speaking out in my mentions, but also many Asian men who seemed
to believe that I was overreacting as an angry Asian woman,” Park wrote to me.
“The thing about that episode is that racialized stereotypes are also gendered.
Lily becomes a sexual object in Marshall's fantasyland, which not only promotes
the fetishization of the docile and submissive Asian woman, but also these
stale characters that also hurt Asian men. The Fu Manchu mustache on Ted
perpetuates the idea that Asian men are untrustworthy, which leads to unhealthy
notions of masculinity in which men are made to be a punchline.”

After a few days of Asian Americans
commenting across social media, Carter Bays, one of the creators of HIMYM finally responded on
Twitter: 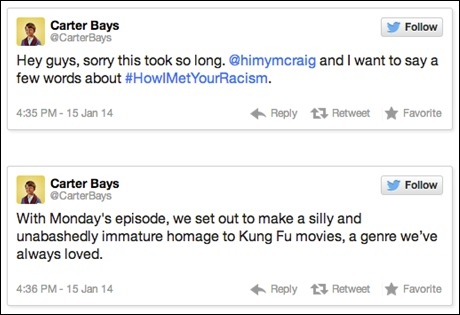 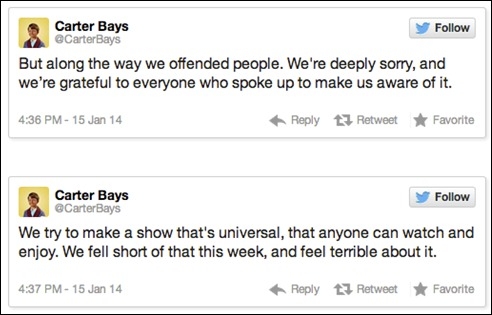 Bays insists that they were only paying tribute
to classic kung fu films, but they relied on accents, Orientalist make-up, and
culturally appropriated costumes as their “homage”. This may bear little difference than
what Griffith intended with Cheng Huan in Broken
Blossoms; using an non-Asian person in yellowface to entertain, and to pay
tribute to a culture he neither understood nor made any real attempt to
understand.

A few
days after the #HowIMetYourRacism hashtag took off, CNN reporter Don Lemon invited
Suey Park to talk about the controversy. He also invited former Last Comic Standing winner Dat Phan. Park’s piece was prerecorded, whilePhan appeared live. If you watch the video, you will see Lemon and Phan deeming critics as "too sensitive", with Park not present to respond.

Phan's response on Lemon's show indicated to Park that "[Phan is] the type of token person who settles for less that our community deserves by co-signing on racism at the expense of his own people."

Blogger Kiriko Kikuchi experienced
similar pushback when she posted a link to the Buzzfeed article on her Facebook
wall. An old friend of hers (who is also Asian American) responded to her post,
and they engaged in a back-and-forth that Kikuchi posted
to her blog with his permission. Early on he states, “The episode is never
targeting the Chinese as the butt of the joke…and given the network it’s airing
on, actually took care to do some relatively progressive things.”

Cheng Huan, too, was meant to be a
progressive representation of Asians in the West. Griffin took pains to change
who he was in the short story for his film appearance. In the story, Huan is a
violent, seafaring brute who is redeemed by a white girl. In the film, he is a
meek, lowly Buddhist monk who never stands up to a society that mocks and
brutalizes him until it is too late. And he’s not even portrayed by an Asian
man.

The ghost of Cheng Huan still haunts
Asian America -- be it on screen, in the form of Dat Phan, or even a close
friend. And perhaps we cannot truly progress until we have exorcised him from
our collective memory for good -- and when the portrayals of Asian
Americans are more nuanced, respectful, and reflective of who we actually are.