Hungry for Love  is a film about two people who meet in New York City and fall in love over food. But we don’t want to cast your typical
romantic leads such as Hugh Grant and Julia Roberts, instead we want to cast
someone like Josh Gad and Rebel Wilson. And by that we mean full-figured
actors. The film is inspired by my own personal struggles with
weight as well as my director’s experience with his mother who has dealt with
many weight-related issues during her adult life. Because of our experiences, my director and I both agree that no matter what your size is,
everybody deserves respect, and has a right to enjoy their life on their
own terms. Losing weight is not the answer, loving yourself is. 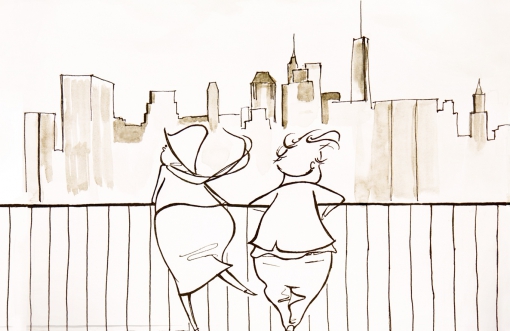 I knew people might think we were making something different
but what I didn’t know was this idea of casting two full-figured leads was so hard
to accept. And before I knew it I was facing a whirlwind of discrimination from
all sides. So, here are the five most shocking things I heard while pitching our film:

While I was pitching the story I needed a logline to help
describe it. Coming from my point of view, I decided to call the leads
“foodies” or sometimes “food lovers,” but this in turn made others imagine two
young hipsters going on a date. So, when I began to describe the story and the
issue of weight came out, I was quickly told that I should change my logline to
be more descriptive and called my leads “overweight.” I wanted to avoid using their
physical appearance to describe them but everywhere I went, it seemed impossible
for me to clearly tell the whole story in the 5 seconds I might have to pitch
it. I succumbed for the time being and I regret every minute of it.

2. “Who wants to watch a movie about two overweight people
eating? That’s disgusting.”

Now, because of my new logline, came the insults. And I took
them personally. I was always thinking of movies like Sideways or The Trip or
any movie where you would see two people eating and that was never disgusting
but just because my characters were not skinny it was suddenly disgusting?! I
tried not to get mad. After all I want to actually make this movie, so I listened
to their side of the story first. I understood that this was not the normal
kind of story and I needed to prove it was a good idea by actually making it.
After they were done unleashing hateful comments, it came my turn to defend
myself. But I found it hard to defend my characters when people were so turned
off by the idea before I even started. They already made up their mind in their
own lives that “fat is disgusting” and wanted nothing to do with it.

3. “Can we cast (insert famous young actress) and put her in
a fat suit?”

Some people were actually interested in the story, thought
it was cute, and had “potential” but then came this absurd “fat suit” request.
This one completely threw me. If they actually liked the story, then that would
defeat the whole purpose! Not only would the film feel inauthentic, but also we
wanted to give the lead role to an actor who normally never gets a lead role,
and not only a lead role but character with a range of emotions so that actor
can really show their talents. We wanted to give the audience a hero/heroine
they are not used to seeing and hopefully want to see more of! And the response
was “can we put (insert famous actress) in a fat suit?” I knew right then and
there that was not the right partner for this project.

I then found people who like the idea of casting unconventional
leads, but wanted to make it a “broad comedy?” To be more specific they asked
for a scene where “the couple tries to walk through a door at the same time and
gets stuck.” Or a scene where “they sit down and the chair breaks beneath
them?” But again, that is the exact opposite of what we want to do with this
material. We want to make a romantic drama, you know, something completely
human and relatable. Sure, it doesn’t have to be too serious, there can be some
funny moments, but not at the expense of the lead couple.

5. “I am not comfortable making a movie about
self-destruction.”

Finally came a criticism of the ultimate message of the
story. Because this story has two “fat” characters that go on an all night
eating adventure and at the end of the journey they “don’t” realize that they
need to go on a diet, we were writing a ballad of self-destruction. They
thought because they don’t decided to go on a diet, our characters don’t change
as if that is the only change possible. It was hard to see that our story was
about characters finding their confidence and strength to live their lives to
the fullest and overcoming prejudice. Because the editing had nothing to do
with a diet, it turned people off. The story was being compared to promoting alcoholism
and drug addiction. My own morals were questioned. Not only were my characters
being judged… but now, so was I.

I thought long and hard about all this. I never realized
that this was such a hot topic. I thought I was telling a heartwarming
story, not a political statement. I realized people have strong personal issues
that they project onto this story and it’s characters. I thought maybe I should
just put the story down and find another. It is obvious that I won’t be able to
do it through any studio system.

However, I have stayed on the path to make this film, and we are currently running a Kickstarter campaign to prove there is audience. The way the director
and I see it, with two unconventional leads who are beautiful in our eyes
because we believe in the value of people from the inside not the out. I am not
here to judge my characters or preach life lessons, I only want to tell a story
that give hope to those that feel left out.