Eugenia Leigh's poems juxtapose the cosmic universality of human existence against the unique and personal experience of the individual. These two previously unpublished poems are in her forthcoming collection, Blood, Sparrows and Sparrows (Four Way Books, October 2014). The first poem imagines a non-traditional God, almost human-like in his careless creation, while the second poem looks at a troubled man with an intimate sense of wariness. Each poem carries a quiet bleakness, gilded with the faintest sliver of hope.

DECIDING NOT TO DROWN TODAY

A man teeters at the edge

of the East River. Is his beer half empty or half
dangerous? Buildings belch from the other side

of the river, squished inch-thin if I squint
hard enough. After his last deliberate swig, the man

lifts his bottle over his head as if considering
whether to sacrifice it. He hesitates.

Where is the memo about knowing
what to save, what to abort?

I drift toward the man’s abandoned mark.
River murk and reflection

divine nothing.
A woman clips a leash to a toddler and I notice

a sign asking not to climb the rocks please.
Everyone warns us off the rocks.

What will keep us from the river?

Eugenia Leigh is the author of Blood, Sparrows and Sparrows (Four Way Books), the winner of the 2015 Debut-litzer Prize in Poetry. The recipient of fellowships and awards from Poets & Writers Magazine, Kundiman, The Frost Place, Rattle, and the Asian American Literary Review, Eugenia received her MFA from Sarah Lawrence College and lives in Brooklyn, NY. 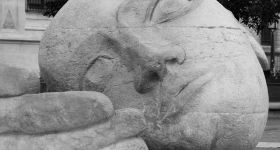 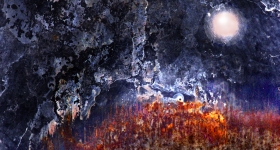