KIWA members join thousands to march in the street last year during the annual May Day parade in Los Angeles.

Around the corner from the offices of Koreatown Immigrant
Workers Alliance (KIWA) is a Korean supermarket where I often go for lunch. The
lunch spot is actually a tiny restaurant tucked into the corner of the
supermarket, where, at most, fifteen diners can sit shoulder to shoulder for
cheap kimbap and noodle soup.

While the servers and the food are distinctly Korean, the
kitchen staff are all Latino. Such is typical for restaurants in Koreatown, a
neighborhood that, according to some, has more restaurants per capita than
anywhere else in the United States. The workers at these establishments -- mainly Korean and
Latino men and women -- are whom KIWA has been organizing since 1992.

KIWA was one of the first worker centers in the United
States, a new model of labor organizing that fought for groups that
couldn’t afford or qualify to join unions: low-income immigrants.
Without union protection, these workers are more vulnerable to being exploited
by their employers, of which the most common example is wage theft: when an
employer does not pay an employee wages they are legally owed.

In fact, Los Angeles is the nation’s wage-theft
capital, with $26 million stolen from L.A. low-wage workers every week -- nearly $1.4
billion a year. In California, employers steal an average of 12.5% of low-wage workers’ income every year -- by paying
below the minimum wage, not paying overtime, and/or not providing rest and meal
breaks. As major stories of wage theft surface from cities outside
of California, such as Boston and Iowa
City, the issue is gradually finding its way into the public
discourse.

From KIWA’s perspective, addressing this issue requires
mobilizing workers and building a unified voice to fight for dignity and
respect in the workplace. And despite the linguistic and cultural barriers
amongst its membership, KIWA is managing to unify
that voice, in a neighborhood, and a city where voices have historically been
divided. In fact, Koreatown is, by many measures, the most ethnically diverse
neighborhood in the country: 53% are Latino/a, and 32% are Asian, with the
remaining 15% either white or Black.

One only needs to walk around the area to discover its many overlapping communities. On one block, Salvadoran Pupuserias and Panaderias
line the sidewalk. Turn a corner and you will come across a strip mall that
houses a Korean pub, a Thai restaurant, and a Pakistani house of prayer. On most
nights, one can find groups of hungry families huddling around two elderly
women selling atol and tamales, the smell of corn and cinnamon wafting through
the intersection.

Roy Choi, local chef, entrepreneur, and Koreatown native, is
a well-known product of this area’s multiculturalism. His Kogi BBQ food trucks
utilize the ingredients of Korean cuisine in Mexican street classics
(tacos, quesadillas, burritos). He is somewhat of a celebrity in Los Angeles,
often credited with having started the national food truck craze. And for those
who are too young to understand what 1992 meant to this neighborhood, Roy Choi
has helped establish a new image for Koreatown as a food and nightlife mecca.

Choi’s interpretation of Koreatown is indeed accurate, and
at times inspiring: “That notion that the Kogi taco was somehow an evocation of
Los Angeles's vast cultural landscape is not hyperbolic. Koreatown is a bit of
a misnomer. In truth, if we're sticking to ethnic assignations, the neighborhood
should be called Korea-Mexico-town.”

Some have even claimed that “his cooking is what
America is becoming.” And yet, while the blending of Korean and Mexican cuisine
is certainly delicious, this romantic representation of multiculturalism as the
simple blending of ingredients should not distract from the underlying
conditions of those that are preparing those ingredients.

Wage theft, forced evictions, lack of affordable housing,
gentrification, and lack of access to parks and green space: these are the conditions
facing today’s working class immigrants, be they from Central
America, Southeast Asia, or the Middle East. And while Obama’s recent executive action on administrative relief has the potential to benefit millions of undocumented immigrants, those that won't qualify will be driven deeper into the shadows.  In this context, the fight for social and
economic justice necessarily requires an equal effort to foster multi-ethnic
coalitions. 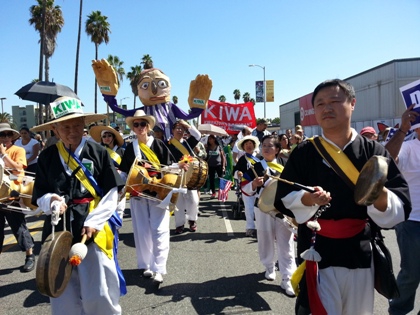 KIWA drummers play in the streets during the 2014 annual May Day parade in
Los Angeles. KIWA regularly uses music and art in its public
demonstrations.

Multi-ethnic community organizing is a terrain KIWA is
familiar with. The same year KIWA was founded, the Rodney King trial verdict deilvered an eruption of civil unrest in South L.A., which soon spread north
to Koreatown. The resulting violence and destruction, exacerbated by local
and national media, painted Koreatown and its surrounding areas as a hotbed of
racial strife and conflict.

The dominant “Koreans vs. Blacks” narrative that emerged from
the events of 1992 only masked the complexity of the neighborhood’s identity.
Koreatown, as with much of Los Angeles, was and still is predominantly Latino.
And within Koreatown’s Latino population are numerous national and regional
identities: Salvadoran, Guatemalan, and Oaxacan. In the northern part of Koreatown,
there is also a small district named “Little Bangladesh.”

Things are much calmer now, and many middle-class Koreans in
the area celebrate the economic “miracle” that is Koreatown today. That
said, development does not translate to equity: today, more than 70% of
Koreatown’s residents are working poor.

So how does one do community
organizing in such an area? Especially if, due to cultural and linguistic
barriers, “community” holds multiple meanings?

The experience of KIWA suggests that given the
opportunity, people can recognize
common ground. Through persistent relationship-building among Korean, Mexican, and Central American workers
and their families, KIWA has been able to bring together seemingly
disparate groups in spaces throughout Los Angeles.

In December 2014, KIWA and many of its allies in the L.A.
Coalition Against Wage Theft met at City Hall to rally before a meeting of the
City Council’s Economic Development Committee. The meeting was a huge one -- the
committee was considering a motion to not only raise the city’s minimum wage to
$15 an hour, but also guarantee paid sick days and new worker protections from
wage theft.

After the rally, the group entered the City Council
chambers. With members from KIWA, Black Workers Center, Central American
Resource Center, and many others, the seats were completely filled. As speakers lined up before the microphone during the public comment section,
the racial and ethnic diversity of the coalition was palpable as ever. When
they spoke, (some with translators) it became clear that there was more that
united than divided: the common experiences, struggles and dreams for a
better future.

The motion was overwhelmingly well-received by the committee,
and in the next 30 days the City Council will (hopefully) develop new
policies that seek to improve the conditions of workers and their families
throughout Los Angeles. The coalition left the hall shouting and cheering, with
each group contributing their own chants:

“The workers united, will never be divided!” 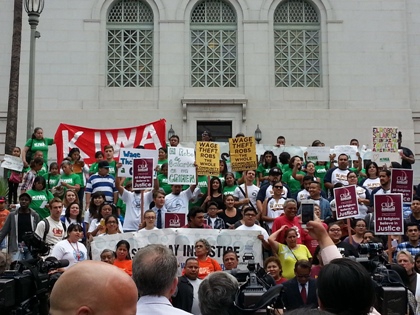 KIWA members and partners in the Los Angeles Coalition Against Wage
Theft organized in front of City Hall last December 2014 to fight for a city ordinance that
would help put millions of dollars back in the pockets of working
families.

Brady Collins is a Doctoral Candidate in UCLA's Department of Urban
Planning, where his research explores the intersection of community
development, culture, and identity. His dissertation focuses on
neighborhood branding and boundary making in multi-ethnic neighborhoods
in Los Angeles. He has been working with KIWA, and other ethnic
community based organizations in and around Central Los Angeles, as part
of this research. Prior to this, Brady worked on a project in Downtown
L.A. that investigated the revitalization of Downtown Los Angeles, and how
it has affected homeless individuals and residents of Skid Row.