K-Town Cowboys initially started out as a web series in 2010, where, in every episode, a “Los Angeles outsider” from Virginia named John (played by Lanny Joon) was introduced to a different and interesting facet of LA’s Koreatown by a group of five Korean American friends - Danny Cho, Shane Yoon, Peter Jae, Bobby Choy, and Sunn Wee – the gatekeepers to this exciting and fast-paced nocturnal world of noraebangs, Korean BBQ joints, and booking clubs. The web series – which was directed by Daniel “DPD” Park, written by Danny Cho, and which also featured nine episodes, including a “bonus episode” starring comedian Bobby Lee – was a hit, and when cut together as a single, coherent piece, won a Special Jury Prize for “Best First Feature” at the 2010 Los Angeles Asian Pacific Film Festival. Five years later, K-Town Cowboys was transformed into an official feature film, and made its world premiere at the 2015 SXSW (South by Southwest) Film Festival in Austin, Texas, with the original cast from the web series reprising their roles and being joined by the likes of Daniel Dae Kim, Steve Byrne and Ken Jeong, who served as executive producer. I got the chance to talk with the film’s director, Daniel DPD Park, upon the film’s SXSW debut, an extremely talented and experienced filmmaker who has also directed various music videos for Far East Movement, Snoop Dogg, LMFAO, YG, Tyga, Sidney Samson, Frank Ocean, Macy Gray, IAMMEDIC and more. Also, don’t worry if you missed any of the SXSW screenings, since the film will be making a “homecoming” appearance at the 2015 LA Asian Pacific Film Festival and will have screenings there on Saturday April 25 and Wednesday April 29. Tickets.

Congrats on the success of K-Town Cowboys and getting into SXSW! How does it feel to be at SXSW this year? And what do you hope to accomplish with the exposure at the film festival?

Thanks, getting into SXSW is amazing for us.  For a small web series to transform into a full feature that gets to premiere at SXSW is awesome.  We hope to to reach new eyes and ears, and work towards a distribution deal with the exposure.

How did you come up with the initial idea and concept that eventually became the web series, which had more documentary-like qualities in that it introduced people to various features of K-Town? Also, can you tell us more about the "Footnotes"?

Honestly I watched Zombieland and thought the rules to surviving Zombieland were something like the rules to surviving a night in Ktown.  I come from a design background and always wanted to have freedom in media within films.  With Footnotes, we wanted to tie in some subtle threads between story lines and characters represented in the feature film.  They can exist independently of each other but I thought it would be fun to use the web videos as sort of easter eggs.  Also it had been so long since we released any Ktown Cowboys materials, that I felt like I needed to fill the internet with new content prior to the release at the festival.

What was the writing process of converting the web series into a full narrative feature like? I noticed some of the characters are more fully fleshed out, each having particular back stories and responsibilities now (e.g., Bobby's character being an adoptee, Shane's character having to deal with the collapse of his business, and so on).

The writing process was a different thing with the feature.  The web series had a very specific episodic breakdown (basically by the rounds of various stages of the night), and reflected memories of night life that we had at the time.  By the time we got to writing the movie it had been 3 or 4 years since then... we were in a different place in life and wanted that to be reflected in the script.  I dreaded making the movie too dramatic, but we felt as a team that it was important to show what the regular lives of the characters were like apart from the circle of friendship they had.

You were able to get Ken Jeong, Daniel Dae Kim and Steve Byrne on board your project, either as producers or actors in the film itself. Were they aware of KTC as a web series beforehand, and if not, how did you pitch them to get involved? Especially considering the fact that they are leading Korean American entertainers and artists, did they immediately "get" the concept? Who do they play in the film? Do you have any idea how KTC is received in Korea or areas in the US outside of LA?

They are all mentors and supporters of ours who reached out after seeing the web series.  They were actors who already had presence in Hollywood and truly wanted to support the community.  We've been very blessed to have their support and guidance.  Daniel Dae Kim plays Peter's older, wisened brother, while Steve plays a character that puts things in motion for Jason.  As for Ken... you'll have to see.  Not sure too much how KC is received in other areas but I have noticed that the actors have been recognized in various cities from various ethnicities.

Craft questions: How long did it take to shoot the whole film? What camera was used? Did you use original or existing music? Any crazy or hilarious stories from set? Were you able to partner up with any local K-Town locations that allowed you to use their venues as sets?

The film took 20 days to shoot.  We used a Red Epic.  The music was from bands that I love along with a talented composer (wuttup Wandag!).  The day we shot Ken Jeong's cameo was crazy.  Everyday was a packed schedule and Ken's cameo day was originally supposed to include Sandra Oh as well, but because of a conflict in schedule she wasn't able to make it anymore.  We had to come up with a re-write on the fly with Ken while shooting our other scenes.  By the time we got to shooting his scene, it somehow came together and I find that moment to be one of the funniest parts of the movie.  Chaos begets order!  Just about all of the Ktown locations seen in the movie are authentic spots that we frequent.  Just like our cameos, Ktown as a community has been gracious to us and provided their time and staff to accommodate our shoot.

What's next for the film after SXSW? How will fans be able to see it, and is there anything you want to say to fans of the webseries about what to expect for the feature? Is there a chance for a K-Town Cowboys 2 somewhere in the horizon?

We're currently in talks with some distributors and hope to have announcements soon.  We also have an LA premiere coming April 23rd with the VC Film Festival.  We want to thank all of our supporters from regular view counts, to Kickstarter backers, to the friends who showed up to be extras on set.  Ktown Cowboys will hopefully entertain you and bring future content to continue the fun! 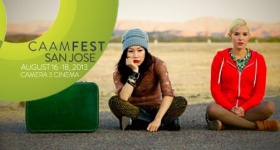