2014 was a great year for seeing more diversity
in comics -- a woman took the helm as Thor, Sam Wilson
became Captain
America, and Kamala
Khan was the first Muslim, Pakistani American superhero to headline her own
series.

So when Marvel Comics announced that there
would be a new Asian American female-led series in Spider-Verse, I knew I had
to pick it up. Silk hit the comic bookstores just a
year after Kamala made her solo debut in the best-selling digital title Ms. Marvel. Marvel’s commitment to bring
in more diverse characters to reflect their readership was paying off -- aside
from the success of Ms. Marvel, the
new female Thor has also been outselling the old
series by 30% -- and I was thrilled to see them writing another young
woman of colour.

Written by Robbie Thompson and
illustrated by Stacey Lee,
Silk follows the events of the Spider-Verse
saga (written by Dan Slott and illustrated by Humberto Ramos), where Cindy Moon
was bitten by the same radioactive spider that gave Peter Parker his Spider-Man
superpowers. Although she doesn’t match the strength of Spider-Man, she’s more
agile and has far stronger spider-sense (AND she can create web threads from
her finger tips). Unable to control her newfound abilities, Peter’s old mentor Ezekiel
Sims approaches the Moon family and offers his guidance to Cindy in controlling
her powers.

Cindy spends a decade being barricaded
in a windowless underground bunker, convinced by Ezekiel that she would be able
to protect herself from an oncoming danger. Though Spider-Man eventually
releases her from the bunker, many years of solitary confinement have made the
world an unfamiliar place for Cindy. She now roams New York City as Silk, searching
for clues on what happened to her family, who seem to have disappeared without
a trace.

Having gone through
two issues so far (Issue #3 was just released today), Silk has shown mostly flashbacks of
Cindy’s past, where she recollects memories of her missing family while trying
to reintegrate into society. Pokémon fans will appreciate Cindy’s shout-out
to the franchise, which is humorous because she’s unaware if it’s “still a
thing” after more than 10 years of being locked away from civilization.

As a huge supporter of Ms. Marvel immediately after the first issue came
out, Silk has yet to have the same impact on me on a personal level. Aside from
the virtue of being East Asian and being heavily marketed as the “first Asian
American female superhero” to lead her own series -- which is kind of true, if
you forget about the short-lived Jubilee solo series in 2004 -- very little has
actually been explored or shown so far in terms of Cindy’s identity as an Asian
American.

There are hints at a tight-knit family and strict parents who emphasize
the importance of studies (Cindy gets in trouble for secretly dating a boy and
her mother forces her to go on a field trip to gain extra credit in school),
but that merely scratches the surface of the Asian American experience. Of
course, there’s the fact that the character of Kamala Khan is very close to Ms.
Marvel writer G. Willow Wilson, who wanted Kamala to reflect
the day-to-day experience of being a Muslim teenager in Jersey
City, whereas Thompson may simply desire a protagonist who is Asian American
without using ethnicity as a back story or plot driver (with that said, being
Muslim is not a plot driver in Ms. Marvel either, but just part of who Kamala
is).

The same can be said of Lola and Rafferty, two lesbian characters who are
introduced in Issue #1 of Silk as Cindy’s co-workers. There has been some critique
about this particular panel being irrelevant to the storyline and a gimmicky attempt
at appealing to LGBT readers, but as Evan argues in an article on lesbians
in comics, “in a perfect world we should be able to view these panels
and think no more of them than if they involved” a straight or gay pairing.

It’s an optimistic way of looking at it, and I’ve been trying to
understand Cindy’s character development in the same light -- that seeing an
Asian American woman as a title character should be just as normal as Peter
Parker, your typical archetypal superhero.

Like Lola and Rafferty, these characters simply exist and it isn’t
something we should analyze or have to think twice about...right? While it’s
empowering that these characters are finally seen and aren’t represented in a
stereotypical or demeaning way, I’m still unsure how I feel about “pure visibility” -- especially if Marvel’s aim is to include more cultural diversity. After all, so
much of our experiences are shaped by who we are, and it doesn’t seem like the
Moon family would change in any way if the characters were not Asian American
(readers also speculate that Cindy is Korean based on the surname Moon, but
that hasn’t been confirmed in the comics). 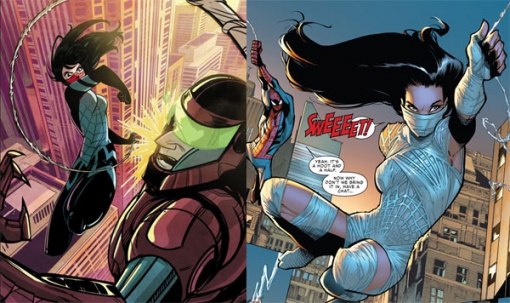 Regardless, Silk has been a refreshing read so far, with a balanced
amount of humour and seriousness. Lee’s illustrations of
Cindy are much more playful than Ramos’ drawings and even Greg Land’s version
of Silk in Spider-Woman, in which both comics
portrayed a more oversexualized (and almost stereotypically exotic) Silk.
Another unique aspect is that much of the comic takes the form of an inner monologue
in Cindy’s mind, as a long period of social isolation has affected her
psychologically. She even willingly moves back to the underground bunker, too
used to being alone and unable to adjust to living with a roommate. It’d be
interesting to see how the series handles this from a mental health perspective,
and perhaps even a cultural standpoint.

As
Slott points out when he first
introduced Silk into the Spider-Man
comics, there has only been one other prominent Asian American character in the
more than 50 years of the comic series: Sha Shan Nguyen, a Vietnamese girl who
meets Flash Thompson, Peter’s high school classmate, while he is stationed in
South East Asia. Being far removed from Peter’s story, Sha Shan wasn’t a
crucial part of the comic, as she gave up on crime after a short stint as a
villain.

As a standalone, Silk continues to intrigue its readers as Cindy recalls more
memories about her family and gets one step closer to finding out what happened
to them -- but for readers who are looking for more nuanced depiction of what
it’s like to grow up Asian with superpowers in America, Silk has yet to deliver.