It seems eons ago that San Francisco State and UC Berkeley students fought for Asian American Studies and Yuji Ichioka coined the term “Asian American" in the late 1960's.

Each decade of Asian America since has brought us pioneering activists, academics, and artists that have changed the paradigms of their fields and caused ripples, both large and small, across the country. So many, in fact, that I’m scared to make a Who’s Who List and leave anyone out and be lambasted on some obscure blog. (Can’t Stop, Won’t Stop’s Jeff Chang is my personal favorite, however).

Enter Francesca Huynh and her online oral history project “Narrating the Chinese Vietnamese Identity” which can be found at www.chinesevietnamese.com.

Francesca is a 22-year old digital historian from Quincy, Massachusetts. In her last year at NYU’s Gallatin School of Individualized Study, Francesca won a summer research grant. Fifteen months, thousands of miles of travel, and hundreds of hours of interviews and transcription later, her site was launched in November of 2015.

“Each story is distinct,” said Francesca, “But with the same overarching idea of the struggle to self-identify. The disconnect between cultures was a consistent theme.”

The project’s idea came from Francesca’s own personal history. “Over dinner conversations with parents and relatives, I heard vignettes of growing up in Vietnam. They were tender but also fraught with trauma.”

“I wanted to understand their experience, that experience of being a minority in Vietnam and then again a minority here (in the United States).”

The website design’s is clear and articulate with Francesca’s own photography and layout skills on full display. It’s a great start for a project that Francesca planned and executed as a one-woman endeavor with a small $3,000 budget.

In the future, Francesca sees “Narrating” as an active living document. She hopes to add in audio and video, produce breakout short segments, and interview more Chinese Vietnamese Americans.

She hopes her site will add to the Asian American narrative of storytelling and activism. “What do we do after we understand our past?” she asked. “We can’t just share, we have to engage.”

K-PoP is short for Ky-Phong on Pop Culture. Ky-Phong Tran is an award-winning writer based in southern California, where he writes about music, art, literature, Los Angeles, fatherhood, and other musings. 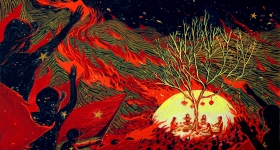