“I’m looking for a place where I can fill some space. I fill

In real life, as in his poetry, Jason Bayani’s voice fills the room. He starts telling a story in a crowded restaurant, and the whole table, no matter how loud the surrounding noise may be, shuts up to listen. A veteran of the National Slam Poetry scene, Bayani’s debut collection, Amulet, resounds with the explosive rhythms of his performance poetry, yet demonstrates the economy and restraint of line that make him as much a master of the written word as he is of the spoken. From its opening gambit, “Remaking the Line,” to its breathtaking closer, “Continuum,” Amulet remains deeply committed to the page and the notion that the poetic line exists as much in space as it does in the breath.

“Whose free / we fighting for?” Bayani asks in “Strange Velocity,” a tough, street-smart critic who is every bit a prophet calling out our culture on its callous racism as he is an artist-philosopher, unafraid to make big claims on Art. Yet, even when taking his fighting stances, he maintains a precision of language in images like “palms whiter than slaughterhouse milk,” and “irises opening like / rusted switchblades,” which startle with their exquisite beauty and violence. In Amulet, the aesthetic is grounded always in the reality of the street, the poems’ lightness of touch gesturing beyond the grimness of the subject matter.

Indeed, it’s these subtle shifts in tonal register -- humor and desperation, street slang and high philosophical claim -- that most energize Amulet. Virtuoso-like, the poems modulate up and down scales of high and low diction, moving seamlessly between free-verse poems and traditional forms like the sonnet. Highly-crafted sequences like “Hella,” a crown of sonnets whose formal elements incorporate language borrowed from a wide range of sources, demonstrate some of Bayani’s writing at its best. In “XIV. Sonnet for Mesej and Jaylee,” for instance, it’s the slang and punchy, improvised diction that charge the form with such raw energy:

Call this a mirth in the mudwork, slapbox

mechanics of prime numbers. A wrecking

Not all of “Hella” maintains this level of intensity; in several places, the pentameter lines slow the pacing, and the poet’s abstracted questions (“How do you determine / the metrics of the immoveable… What if / life is a matter of escaping the equation?”) somewhat dampen the tone. Throughout the book, however, there remains a clear sense that somewhere, beyond the page, exists a felt rhythm against which these poems take shape. “[M]y sky,” the poet says, “I watch it fall in measures” -- and indeed, inherent in his work is a sense of language that, in its evocation of experience, embodies a steady, measured time: a beat, so to speak. In this way, the poems exist as a kind of musical score, written record of the interplay between printed and performed language. This genre-bending conceit is further extended by the book’s closing poems; “B-Sides,” they’re called, as though Amulet were a vinyl record, and these are the pieces that the artist loved too well to leave out.

“I been in love with Hip Hop since back in the day,” he writes in “History of the Ardenwood B-Boys,” one of several poems that traces Bayani’s origin story through terrain demarcated by tension along cultural, linguistic, and racial lines. It’s poems like “My Father’s English,” “Magkampo,” and “Ma,” that most explicitly confront the experiences of violence and dislocation that Bayani claims as his inheritance. “I understood what it was that my parents had lost by coming over to this country. That our experience in America comes from a foundation of loss,” he wrote recently in an essay for Muzzle Magazine. Though the poet observes, “The violence doesn’t make you tough / like they said it would—just makes you quiet,” Amulet is not a quiet book. Instead, its poetics, formed by tragedies of language and loss, immigration and violence, result powerfully in poems of witness, the testimonies of a street sensibility forged in the

that can hardly carry the stubborn heart of patois,

The final section of Amulet shifts into a new set of narrative frames. A move to Austin; a failed relationship; a renewed voice that, as in “A Broken Crown of Sonnets for the End of the World,” exudes a fullness of language, long lines brimming onto the right margin of the page. Though the stanzas remain measured by Bayani’s characteristic musical resonance, the language and subject matter broaden, as though this fresh landscape has opened a groundswell of song:

The whole body of me, a crooner, a soul singer,

some busker with a broken guitar

who sings of home

and all the wonderful things we wish to fill it with.

In Amulet, Bayani writes poignantly of steel trees and burnt-out cities, of “these lives we made building ourselves into brick,” and yet, it’s more than brick and steel we encounter in this book. As much as the poems take their powerful, fighting stances, they also embody “a big stubborn heart / full of stomp and tremble,” one that is rhythmic and rife with guts, trembling with the tender marvel of a voice conceived in pain, humor, and toughness that takes the world head-on. 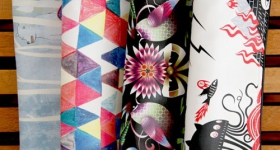