Sunil Yapa's debut novel, Your Heart is a Muscle the Size of a Fist, is a gripping novel that takes place over the course of one day, during the 1999 WTO protests in Seattle. The book follows seven characters and their different perspectives and roles during the protest. We're pleased to present you a short excerpt from Yapa's novel.

“Oh shit.” The young man in the denim jacket seemed very worried. He said, “Oh, fuck. I’m so sorry. Is that even the thing to say here? We’re out here to protect countries like yours.”

Charles nodded, thinking, Protect countries like mine? What did he imagine the Third World to be? This man with his denim jacket, his sandals and socks, his greasy brown hair. Did he picture a world without universities, without scientists and politicians, without writers and thinkers? What did he see there in his mind? A world of horses and hand-pulled carriages? Broken-limbed beggars howling at every turn? Did he see a wasteland devoid of taxis and buses and the straight-backed men and women to stand and hail them?

As if every soul that had ever breathed the air of Sri Lanka — the Third World — had lived a miserable ill-begotten life. Died a name- less unremarked death. Charles looked around. It was a strange idea. Did these people imagine America to be a place lacking in sorrow? Suffering?

He felt a sudden queasy sadness. What if they knew what a real revolutionary was? How bloody is a real revolution. He looked around, suddenly feeling the need to sit, and saw nothing but their faces, their round wet faces staring back at him.

What a violence of the spirit to not know the world.

Excerpted from the book YOUR HEART IS A MUSCLE THE SIZE OF A FIST by Sunil Yapa. Copyright © 2016 by Sunil Yapa. Reprinted with permission of Little, Brown and Company.​

Sunil Yapa holds a bachelor’s degree in economic geography from Penn State University and an MFA from Hunter College. The biracial son of a Sri Lankan father and a mother from Montana, Yapa has lived around the world, in Greece, Guatemala, Chile, Argentina, China, and India, as well as London, Montreal, and New York City. Your Heart is a Muscle the Size of a Fist is his first novel. 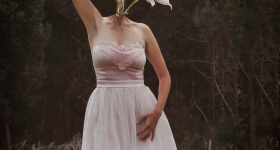 Poetry as Prayer and the Praxis of Emptiness: