Susan Lee-Chun is a Korean-American visual artist who has exhibited her work nationally and internationally, at the Pacific Asia Museum, the Boulder Museum of Contemporary Art, Museo de Arte de El Salvador, Asian Film Festival Berline, Pérez Art Museum Miami, and others. She was born in Seoul, grew up in Chicago, and earned a Master’s degree from the Art Institute of Chicago. She has lived and worked in Miami for the past 14 years. In her current exhibition, It’s a Pleasure (Not) to Meet You, at David Castillo Gallery in Miami, Lee-Chun places objects in vitrines—a 2-foot wide hoop earring decorated with curvy letters spelling out “La Chinita,” a giant 4-finger ring with the word “Gibberish” written in Chinese takeout font, Bruce Lee soap figurines, and others, calling attention to culturally ingrained stereotypes.

“La Chinita,” you were saying -- that’s your life. How does Miami’s Latin American dominance enter your work?

The name earring was appropriate because here in Miami, people will call out, “Ai, Chinita!” And it’s like, Hey. That’s my name. Because, most likely, I’ll be the only Asian around.

It took a while to fully understand the nature of the term. Oftentimes, it’s not meant to be derogatory, because when you try to explain it, they’re like, “No no no, it’s not like that.” But let’s have this conversation because it is -- it’s a classification and it’s highlighting the physicality of who I am. That conversation is lost, though. “So…what am I supposed to call you? I’m Cuban.” Yes, but I’m not Chinese! Asia’s vast, it’s enormous -- people don’t understand that.

Sixty percent of the world is Asian!

Dude, we’re the dominant population! And yet, we’re not.

For quite some time it was hard to understand the vernacular, the idea that language varies, and to come to terms with this as a title. I’m not really fond of it, but I can laugh at it, I can have fun with it, I can create a work about it.

There’s always the question, especially around here -- “Where are you from?” I’ll say, I’m from Chicago. Actually, I was born in Korea, but this just makes it far easier for them to blunder. They’ll say, “I’m talking about your parents.” Oh, they’re from Korea. The next question is even funnier. “North or South?” I’m like, really? If I was from North Korea, I probably wouldn’t be here. And they’re like, “Why not? Cuba’s communist, China’s communist.” No -- not the same thing! Do we know about current events? The history of the world? There is always a lot of explaining and storytelling. I’ve become an ambassador. 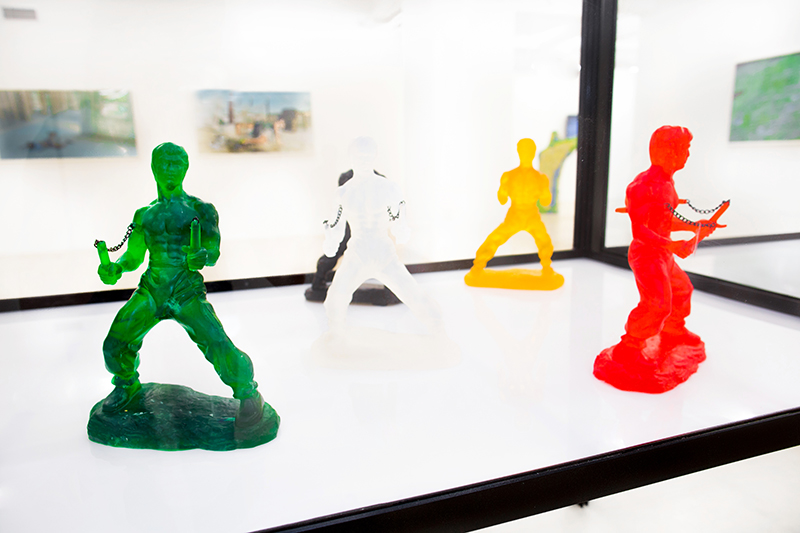 These works seem different from your earlier works which were about assimilating and becoming invisible. How is your work different now?

Prior to this, I was trying to mask or navigate around the issues, trying to make them universal. But then, I was wondering why. I always felt I would love to do work like this. It took awhile, in Miami. I thought I should be able to have my fun and do this versus being hesitant. I felt that this spoke louder.

Did your hesitance have to do with living in Miami where Asians are only 1 to 2% of the total population?

I always felt that if I make work of a certain type that highlights who I am, people are going to comment, “Do you really need to make work like that? The conversation is not about that, today, in the art world.” In Miami, the voice is extremely limited.

I feel that putting up this show calls attention to me and it’s something I’m not that fond of. The title of this show is It’s a Pleasure (Not) to Meet You. It’s about physically not having to meet -- that they don’t have to see me to see this work. I think it speaks to not just somebody of Asian descent. It speaks to a culture. 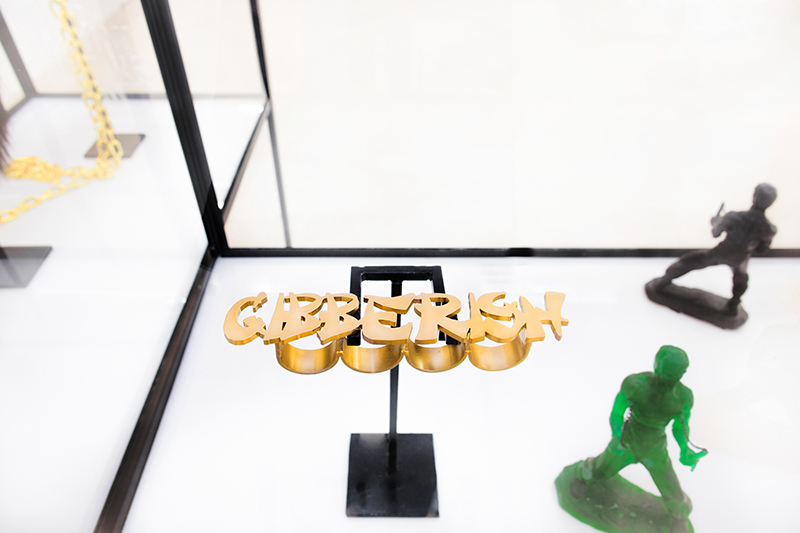 You’ve done a lot of performance, video, and photography that incorporates your body. Can you explain how these new objects fit into your work?

These objects don’t incorporate my body but I felt like they do it in a distant way. These are objects that reference the body.

You go to antique shows or flea markets and come across Aunt Jemima bottles, all these things that people find offensive. But then, with objects like a Bruce Lee sculpture or happy cats or blue-and-white oriental vases, people are like, “Oh! Cute! Funny! I’m going to put that in my house.” There’s no, “Can you believe that stuff still exists?”

It says a lot about the disconnect that people have in understanding how objects are tied into the history and development of a people. When I go into an Asian import store, I’m like, “I can’t believe they made this.” And then, “I need to have it!” And then, “NO! Don't buy it!” Then, I bring it to the studio and look at it and think, “I hate you…”

Exactly! And buried in so many layers that people can’t or won’t access. Those objects circulate the idea that “I’m erasing your culture.” And quite possibly, “I own you.”

Stereotypes come across in everyday objects and the Aunt Jemima bottle is a great parallel example. Do you want people to relate to your works as cultural artifacts?

The work takes forms and shapes that break or enter into the everyday, and starts chipping away at what does exist. Putting the work in a vitrine puts it in the context of an ethnographic museum and legitimizes it. This is not just for fun. There’s weight to the issues and playing with size and scale brings it back.

These ideas exist and they’re relevant to our cultural history and not specific to one person. It’s a dialogue between cultures about cultures. For a lot of Asian Americans that conversation is never in the forefront.

The scale makes the pieces really funny. What’s the role of humor in your work?

These pieces probably resonate louder with laughter. Or I would like them to. I think that’s something that can make them more palatable. That’s why I love comedy. I love comedians who are so right up in your face about those issues. I loved Dave Chapelle when he first came on the scene. I was like, Damn! That’s hilarious, and so true! It made so much sense and it was a necessity. I love Margaret Cho, Sarah Silverman, Amy Schumer. I wish I could be as funny as those people.

Sometimes they go too far but that’s great because they don’t know the edge. They just keep pushing.

That’s when they start redefining the edge. If they don’t rile up discomfort, what’s the point? 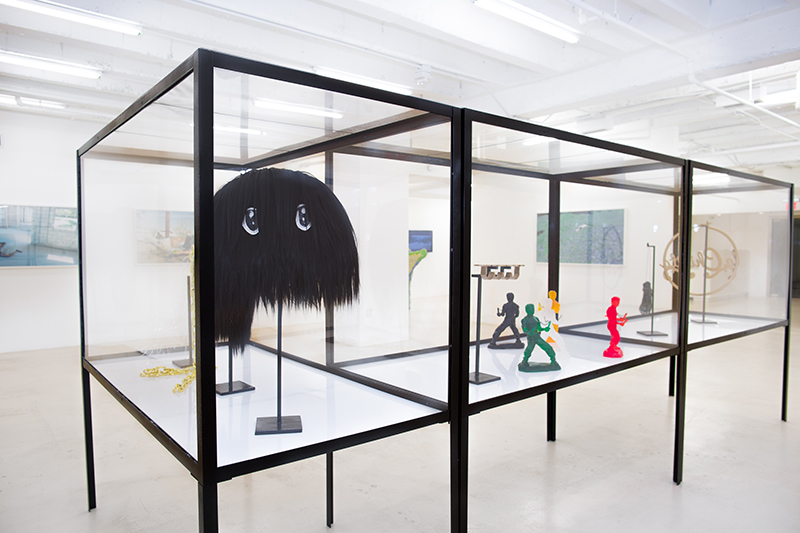 It’s a pleasure (not) to meet you, 2016, installation view. Courtesy David Castillo Gallery.

How have people received this work and this show?

Gibberish (oversized four-finger ring) -- that’s the one people don’t get. They’ll say, “What’s with the gibberish?” Well, it’s about gibberish and the font style. And they’re looking at me like, “What’s the deal with the font style?” Have you never seen it on Chinese takeout, Kung Fu writing? We all know it but maybe because it’s so widely circulated and not problematized, people look at it and think, Of course! Bruce Lee! Nunchucks! “This is because she’s Asian. That’s why it’s here.”

No, that’s not why it’s here! Can we talk about this?

Susan Lee-Chun exhibition, It’s a pleasure (not) to meet you, is featured at the David Castillo Gallery in Miami, FL until May 31, 2016.

Erica Ando is an art critic and artist. Her writing has appeared in Art Papers, ArtPress, Aesthetica, and others. She was born in New York City and now lives in Florida. 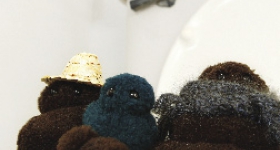 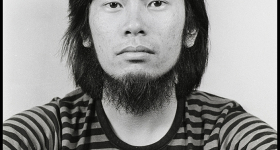