Angela Peñaredondo’s poetry collection 'All Things Lose Thousands of Times,' had me reading aloud, pen in hand and notebook propped on one knee. These poems are dense with images that revolve around themes of violence, nature, temporality, borders, place and historical memory. The initial effect upon first reading is a sense of disorientation, but subsequent readings impart joyful wonder from the compounding revelations they profer. The author challenged my expectations of what language can do -- twisting in slant rhymes and doubling back over particular images. I found myself playing with the line breaks and pauses on my tongue. Peñaredondo's aesthetic and subject choices complicate our understanding, and I felt like my creative imagination was expanded after reading her book.

As Mg Roberts describes in the collection’s forward, “[the] poetic aesthetic… gestures to larger conversations: what is it to be a queer, brown woman dispossessed by a faith whose God refuses you? What is the signature, abutting edge, stitch that destabilizes notions of this construct?” These questions hover throughout the collection, asked repeatedly though never answered directly. Rather than narrating through a single perspective or character lens, the poems move from vantage point to vantage point. Queer identities and various Asian identity markers are mentioned without fanfare or translation. The poetry does not try to make itself relatable to the reader; instead, it asks demands us to interrogate ourselves, our assumptions and our beliefs.

Neorealism, repeatedly referenced when describing Peñaredondo’s poetry begun in the 1940s and sought to directly confront the social and political reasons that caused World War II and deal with its subsequent horrors. The technique opts to use quotidian images over fantastical or dramatic ones as a vehicle to express intense emotionality. Peñaredondo makes direct references to war (in the entirely different context of Southeast Asia rather than Europe) and applies nature images to human conflict, as in the poem “Black Tigers.” In that piece, the women soldiers are described in parts as they go through their everyday lives and only as the poem progresses does the reader infer inherent social and historical contexts.

I usually prefer narrative poems, but Peñaredondo’s poems drew me in through her deft use of stylistic elements. For example, in the above excerpt from “Situation Sculpture,” the lines slowly urge the reader to ponder images of confinement in relation to cultural norms -- and the instability of that “ribbed mold.” The University of California Institute for Researching (UCIRA) in the Arts (from which Peñaredondo received a grant for “investigating kinetic identity through poetry”) describe her work as a set of “nonlinear, multi-angular... poetic travel narratives.” She builds worlds in a few lines, jumping from one clear picture to another in the span of a few words. She particularly demonstrates this skill powerfully in the poem “What She Wills [The Trees Behind],” from which the collection title is drawn:

You think of the different countries
now washed over by rain,
very well,
they tell you under fractions of sky,
because they've watched all things lose
thousands and thousands of times.

As UCIRA’s blurb suggests, “kinetic identity” describes the ways in which people are affected by changes in time and place. Here, the author slows down the rhythm and cadence when describing the final image of the poem to minimize the importance of manmade borders. Moments like these felt like tiny beautiful gifts, as did the author’s way of examining singular images. As I re-read certain lines and stanzas, I glimpsed new meanings symbolized by certain images as I turned their significance in my mind from different angles. In my notes, I wrote “more like looking through the slats of a fence to see the lives beyond” to describe the technique.

I had a lot of homework while reading these poems. I opened up tabs and tabs to look up references I was unfamiliar with. In the span of three lines in “Love Darts,” Peñaredondo references Paula Rego, Sappho, and Samuel Delaney. You don’t have to look up everything to get into the poems, but I had moments where I put my reading on pause to understand how these references functioned and interplayed wtih other elements of the poem.

All Things Lose Thousands of Times was more of an intellectual exercise rather than an emotionally resonant collection for me. My favorite sections were parts 3 and 4 where the narrator turns from the distant third person to the first person. The author also includes experiments with prose and list poetry in section 4, which showed flexibility and gave off a different tone. The collection as a whole was linguistically compact, meticulous, ridiculously creative and quite cerebral. It took work to delve into it, but I felt enriched by the investigation.

Jordan Alam is an emerging writer and Bengali American working on her first novel. She is the founder of the Asian American social justice publication, Project As[I]Am. Find her at her blog, The Cowation and on Twitter @thecowation. 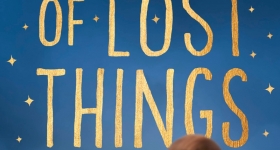