For the new year, we give you two of Lee Herrick’s delightful poems—necessary fist-in-the-air anthems of hope because though you can’t “echolocate like a bat,” “you are one of many species who can whistle.” May any scars from “the nasty hell of your difficult year” serve as powerful reminders of “the bright chorus of your own survival.” May 2017 indeed be a year in which “everything / aligns as it should.”

What a miracle it would be
to echolocate like a bat,

to shriek and have the shriek
bounce back to alert us

to the oncoming train, the wrong person,
or a year of trouble.

The organism which hears best
is the Greater Wax Moth,

which can hear 100 kHz more
than the bat, which preys on the moth.

And what do we hear, with poor night
vision and no ability for flight?

Can you hear your lover hum near the stove?
You are one of many species who can whistle.

Dogs can differentiate between their owners’
footsteps and a stranger’s.

And what have you heard tonight,
the low sigh of your father’s fatigue,

the scrape of a brush on the canvas,
the echo of your singular breathing.

The nastiest lick in the whole damn repertoire
is in the first movement, the conductor said
to the first violin. A concerto like tonight’s is
a dream swell, a dark circus of fluted magic,
the nasty hell of your own difficult year,
the bright chorus of your own survival, awash
in a floral weave of ocean foam among the dreaming
musicians preparing for the nasty lick, their lips
tightened like fists, rusted knives in a deep inventory:
one blade for large game, one blade for short trees,
one blade for berries, one blade for gutting the whole
damn idea. We have, what the conductor would call
a repertoire: how to maneuver if you aren’t in tune,
how to bail when the wave overtakes you, when
the concerto has such mean licks you almost break,
the lights dizzy the fighter in you, but your repertoire
comes back to you in some animal moment, your breath
now in time with your instrument, and everything
aligns as it should: your glistening body healed from
the incision, your flawed key buried under your shining
knives, your favorite chapter, your go to song. 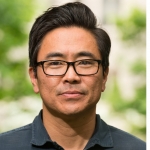 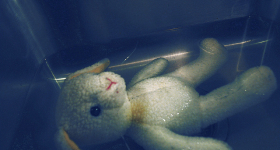