Each May, we celebrate both mothers and Asian Pacific American Heritage Month, as well as Mental Health Awareness Month, and in that spirit of observation, we feature Mia Ayumi Malhotra’s poems, both of which urge us toward reverential praise of the survivor. “To My Many Mothers, Issei and Nisei” names and honors women who were imprisoned in World War II Japanese American internment camps. Its rich litany of exaltation for the women’s strength includes a striking homage to the precise camp beds on which some of these women slept: “Hallelujah to the dusty bed sheets / of Rowher, Arkansas, Block 9, the women of 9-9-C.” Malhotra’s poem insists that we not only remember the women’s suffering but also find glory in their survival. The anaphora-driven “One Day You’ll Look in the Mirror and See Lions (II)” also serves as a powerful benediction with its chant-like cadence. The poem lifts us from fear, then that which is feared is confronted instead of avoided, then finally tamed.​

To My Many Mothers, Issei and Nisei

Praise be to beef liver stew, to gravy biscuits and home
-baked bread, to women in suspenders who worked
like dogs in the packing shed. You fed us well, O god-
desses of goulash, chicken dinners wrangled from
the coop. For penny money and seamstressing, praise.
For wartime meals, parsnips and sweet potatoes, praise.
You worked ‘til the final hour then rose three days later,
baby squalling on your hip—back to breaking canes,
clipping hooks, stripping stems of leaves and debris,
hustling the men through stopping time. No breaks, boys.
All glory to the sound of the nursery truck revving
in the morning, to the clank of steel pipes and boiler
-house rumble. Hallelujah to 4:30 AM, Emeryville
streetcars and the smokestacks of Richmond.

And if for no other reason than they’re what taught us
to praise, glory to the roses run wild, the packing shed
left to cobweb. Hallelujah to the dusty bed sheets
of Rowher, Arkansas, Block 9, the women of 9-9-C.
100. Sakai, Chu
102. Sakai Ruby
103. Sakai Kazue
O praise to the midwives, to the girls swatting birdies
and shooting hoops when their husbands weren’t looking,
to the coed who crossed the country, where men spat
why ain’t chu in camp, youjapyoudog, who was held by
the lady at the railway station. Lord knows her name
but glory hallelujah to her too, whoever she may be.

May you not fear what lies ahead.
May the moon’s full face
light your own, milky
with tears. May it ferry you into mystery.
May your body, luminous
in its skin, so thin the bones
glow through, brim
with the whispered prayers
of lacrimal and lesser wings.
May the lion’s mouth be shut.
May its head sink to the ground
at your approach, splendid
in cotton nightie, an apparition
of joint and socket plainly revealed.
May you stand and be spared.
Please, all I ask.
Cast in greenish light, your hands rise,
tendril-like, to receive
a fullness your daughter,
drawing near, feels spilling
onto her fingers. Poor soul, you can see
the fear lifting like smoke
off her skin. Don’t fight, you want to say.
Come, stroke the beast’s shaggy head.
Pull open its terrible maw, see
for yourself, not the teeth
you expect, but the gentle rumination
of bovid incisors, a muted tongue.
Come, child. Lie with the lion,
the ox, the lamb.

Eddie H. Ahn has been recognized as a Cartoonist-in-Residence by the Charles M. Schulz Museum and a featured artist by Kearny Street Workshop hosted at the SF Cartoon Art Museum.  He is also the writer and illustrator of "Sidewalk Empire,” a serialized comic strip previously published by Hyphen Magazine, and "Wish the World."  His other work can be viewed on instagram @ehacomics. 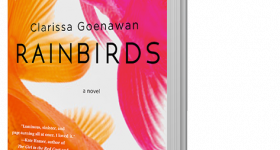 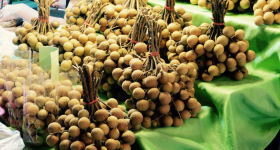