How a woman of mixed Chinese ancestry used food to come to terms with her identity.
Chloe-Rose Crabtree
January 23, 2018

When I moved from Los Angeles to Paris for grad school, I was relieved to find out that my apartment was in the 13th arrondissement: Chinatown. The fear of moving to a new country where I did not speak the language was alleviated by the promise that I would be able to find the foods that reminded me of sitting around the table with my family in restaurants throughout the San Gabriel Valley. Chinese food was always a staple for my family but was almost never cooked at home. Though we have Chinese ancestry, it wasn’t until Chinese immigrants began to develop restaurants for immigrant communities in the late 1980s that my family was truly exposed to Chinese food that wasn’t made for American tastes. For my family, the Chinese food that is now characteristic of the San Gabriel Valley not only fed us but also gave us a tangible link to a piece of our heritage that had been lost to generations of assimilation.

I grew up in the suburban bubble of Arcadia, CA, also known as Chinese Beverly Hills. In this environment, my Chinese heritage was a point of pride, and it was a thread of commonality between my classmates and me. Before I had transferred to the Arcadia school district, the thermos my mom filled with my favorite frozen dumplings from 99 Ranch was called "stinky," and my food was weird. Once I was within a student population that was majority-Asian, my food was rarely commented on unless someone was asking to share. My knowledge and relationship to Chinese food was key to cultural legitimacy in this context. I was able to look across the lunch table at my classmates and though our faces looked different, we had a physical piece of our shared history to bond over.

My family has lived in the San Gabriel Valley for generations, and when mother and her siblings attended Arcadia High School in the late ’70s, they were one of very few Asian students at the school and would often claim Hawaiian heritage to account for their non-white features. When I attended Arcadia High School in the early 2000s the student population was 84 percent Asian, and I was routinely pegged as “mixed” by my Asian classmates or almost any other Asian person I have come into contact with in my life. While it was flattering to be recognized by other members of the Asian-American community, as a multiracial person, my connection to my Chinese identity always seemed tenuous unless food was involved.

I am fifth-generation Chinese with a family tree that looks like a United Nations conference. My relationship to my various ethnic heritages is one that is the consequence of over a century of cultural amnesia. As for my Chinese ancestry, the loss of language and tradition was largely due to the fact that when my Chinese great-great grandmother arrived on American soil, she was soon orphaned and raised by a white family as a companion for their young daughter. As a result, she lived within, or rather adjacent to, a white world from a very young age. Fidelity to her ethnic heritage was antithetical to her survival, and though she married a Chinese man, rampant sinophobia didn’t exactly give her incentive to maintain a close relationship to her Chinese roots. In fact, it was probably her ability to take on a culturally American identity that made it possible for her to find work as a nurse and support her children after she was widowed. In 19th century America, being Chinese was something to overcome, not embrace.

Her daughter, raised to be culturally American, married a man who was not Chinese — the couple was forced to go to Mexico to obtain a legal marriage license because of California’s anti-miscegenation laws. Her half-Chinese children, my maternal grandfather among them, grew up almost wholly divorced from their Chinese heritage. In addition to the loss of language and tradition, Chinese food was also lost to the family unless it came in the form of Chinese-American dishes like chop suey, fried rice and egg foo yung.

Luckily for my generation, the San Gabriel Valley has developed into a mecca for Asian food in a way that was not imaginable before the passage of the Hart-Celler Act in 1965. This act repealed immigration quotas that discriminated against non-Northern European immigrants and facilitated what has been called the third wave of Chinese immigration to the United States. The result was an increase of Chinese-dominant communities across the country, one of them being my hometown, Arcadia. After China officially opened its doors to the western world in 1978, family members in Guangzhou contacted my great-grandmother. My maternal grandmother, though not Chinese, was intrigued by the idea that we had family so far from home, and she and my grandfather made the trip to China to meet them. This experience gave them exposure to the vastness of Chinese cuisine, and as more and more Chinese restaurants began to open around them in Arcadia, they saw an opportunity to rekindle my family’s relationship to our culinary past. What was novelty in the ’80s has become a part of my personal narrative.

By the time I was growing up, family dinners regularly featured clay-pot rice from May Mei. When my cousin immigrated from China, he ordered us the off-menu steamed rockfish at GoGo Café, a dish so beautifully and delicately flavored with soy, scallions and ginger that it became a quick favorite. While people across L.A. were "discovering" xiaolongbao at Din Tai Fung, my grandmother would drag us out to enjoy the delicate crunch of sea cucumber dumplings at a now-closed dumpling house in San Gabriel. When she discovered that a chef associated with that dumpling house was serving the same dumpling at Zui Xiang Yuan on Valley, that restaurant became a new favorite too.

Family dinner became a ritual of family bonding and cultural recovery. As my siblings and I licked our fingers clean from the sticky glaze of the charsiu baos, we were told, “This is your food.” My grandfather made sure each of us knew how to use chopsticks, and he would craft “training sticks” out of paper wrappers and a rubberband. He would coach us to pinch the sticks together in order to lift carefully wrapped dumplings from our plates without tearing them. When we no longer needed the training wheels, our skills were tested with ice cubes and boiled peanuts, which always proved to be more slippery than we remembered. We rarely knew the correct names for the dishes we ate, but if there was something that came out of the kitchen that looked good, the waiter was stopped, and we added it to our order. We were taught to have inquisitive palates, to look to the people around us as carriers of traditions lost to us, as people who had knowledge that was valuable. In restaurants with predominantly Asian patrons, we were told: “These are your people.”

Food has the power to communicate empathy, to feed curiosity and restore history. The Chinese food that catered to an immigrant community was a chance for my family to recover from the generations of forgetting. It gave my family a point from which to discuss our own immigrant history. Food made that history real; each bite linked me to a cultural narrative that is both deeply embedded and excluded from the idea of what it means to be American. As my family explored Chinese cuisine, we encountered our history, we asked questions about what our ancestors would have eaten in China. Each meal conveyed that I was a part of a deeply rich cultural history — I was taught to have pride in that identity, I was taught to cherish the part of me that was "other” and embrace those who carried “otherness” in them too. The thing about assimilation is that it is sold as a way to fit in, to find success, to prove your worth. The reality is that assimilation is just a form of cultural cleansing, a process of self-negation. As assimilation begins to suck a family’s history dry, language disappears, traditions fade, but food is usually the last to go. The restoration process happens in reverse, and my family will be forever grateful to our Chinese family, the restaurants and the community that have fed us and given us the tools to begin to rediscover our own immigrant past. 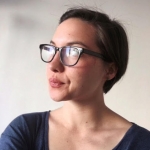 Prior to her re-entry to academia to study the history of American food culture at Columbia University's Paris campus, Chloe-Rose Crabtree was a Los Angeles pastry chef. Her research focuses on how 19th-century domestic science in the United States impacted the acceptance of women in higher education and the creation of a “true” American identity. She is currently based in London where she continues to bake compulsively and examine the ways in which cultural perceptions influence our relationship to the food we eat and the people that feed us. 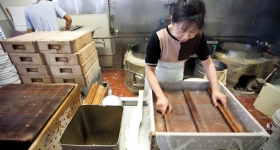 As American as Tofu