A new diet and dining habits that ruptured the Japanese American family and culture during WWII
Laurel Fujii
February 19, 2018

As a fourth generation Japanese American and Californian, most of my older maternal and paternal family members were incarcerated during WWII. This year the 76th anniversary of Executive Order 9066, which called for the removal of people of Japanese ancestry from the West coast, falls on President’s Day.

My maternal grandma was 13 and her older sister Eiko was 15 in 1942 when their family was given little notice that they had to move from their home in Cortez, a tiny town in Merced County, CA, to the Merced Assembly Center. Next, they were sent to Amache, or the Granada War Relocation Center, in Colorado about 18 miles from the Kansas border, where they remained until 1945.

Among the Japanese American community, this time is now referred to as “camp.” My grandmother claims to not remember as much as her older sister, my grandaunt Eiko, or Auntie Eiko, as the younger generations call her. Auntie Eiko remembers her family of eight moving into a hastily built barrack fitted with only cots, one light and a potbelly stove. Their lifestyle and diet changed instantly. Japanese food wasn’t readily available, they weren’t prepared for Colorado’s cold weather and they had to wait in line for everything. With the lack of familiar vegetables and fruits from California’s Central Valley, camp introduced Auntie Eiko and my family to bizarre foods that were foreign to the Japanese diet, as well as a new routine of dining in the mess hall. Auntie Eiko is now 91 years old, but she still remembers vivid details from her adolescence during camp. Now she supports my activist endeavors even if she is pulled into my schemes. 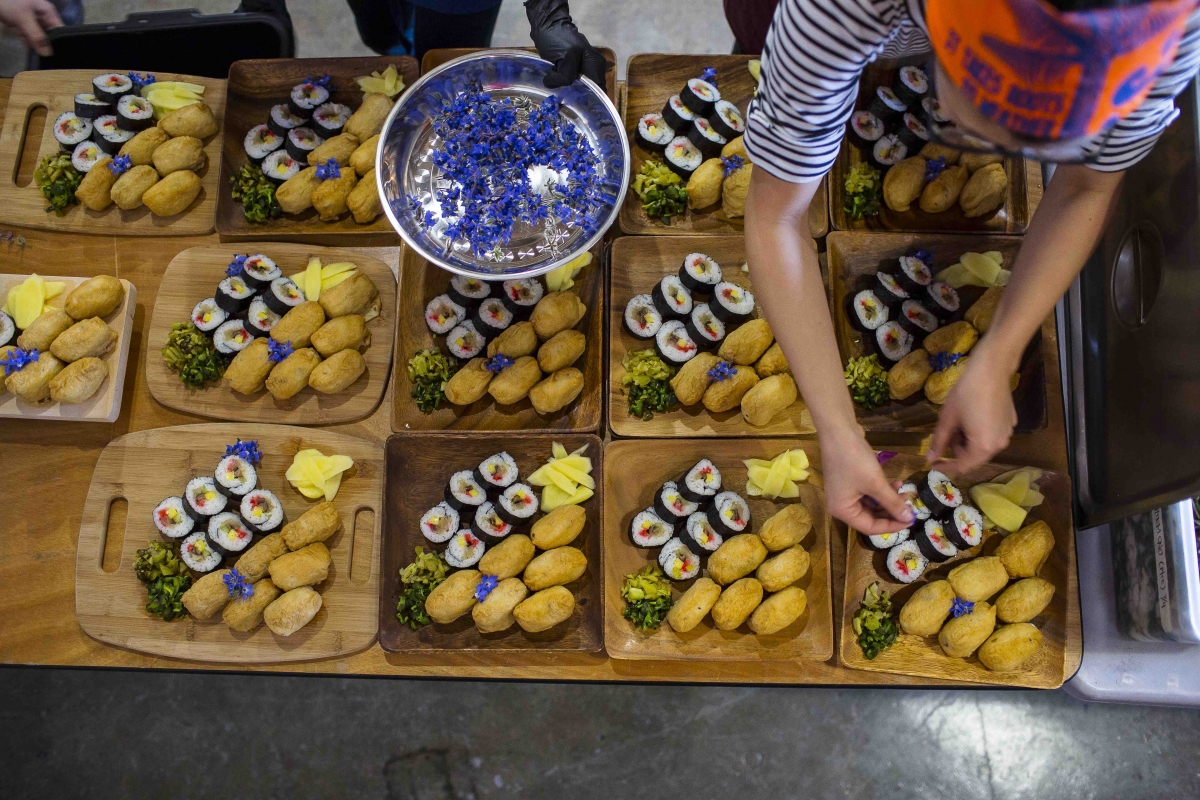 Volunteers at the People's Kitchen Collective's “TO THE TABLE" meal plate inarizushi and makizushi made by Eiko Matsuoka and the author's grandma, Mitsuko Morimoto. Inarizushi is a fried tofu pocket filled with sushi rice and diced shiitake mushrooms and carrots. Makizushi is a colorful sushi roll filled with kampyo (shaved gourd), shiitake mushroom, egg, celery, and ginger, then sliced into eight to nine pieces. ​Photo credit: Sana Javeri Kadri 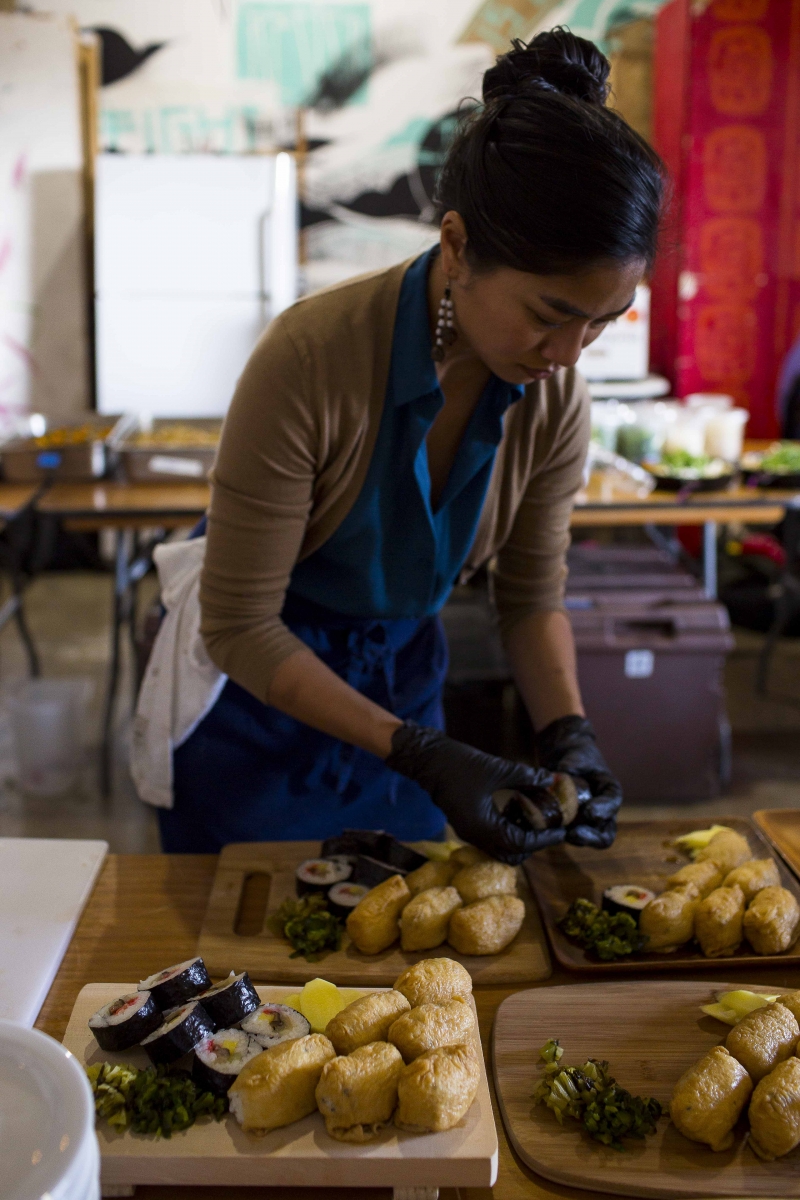 Volunteer Aileen Suzara plates donated inarizushi, makizushi, and pickled vegetables on borrowed cutting boards that were converted into serving plates. Many community members contributed to the People's Kitchen Collective's "TO THE TABLE" meal even if they could not attend. ​Photo credit: Sana Javeri Kadri

In searching for activist food spaces, I started supporting the People’s Kitchen Collective based in Oakland. We recently hosted a solidarity meal around EO 9066 and Japanese internment and their connections to current day executive orders and xenophobia stemming from fear and hate. Many community members, including Auntie Eiko, contributed to the meal by providing homemade Japanese foods or platters. All 80 guests got to sample Auntie Eiko’s inarizushi (fried tofu pockets stuffed with rice and diced shiitake mushrooms and carrots) that was plated next to my grandma’s makizushi, a homestyle sushi roll one would never find on a Japanese restaurant menu. I interviewed Auntie Eiko in her kitchen over chicken with black bean sauce in El Cerrito, CA. Below is an edited version of what she told me.

We were taken to the assembly center and put into isolation barracks because your grandmother brought mumps home from school, and four of us had it. When you have mumps, the parotid glands are infected and swell up, so when you eat anything sour you hit the ceiling. It’s really bad. The first meal we got was sauerkraut and wieners and I had never eaten sauerkraut before, so I thought, “What is that?” You can just imagine that doesn’t go over very well for someone with mumps. I could hardly chew and it was so sour. It’s really an education I guess, because so much of the food in camp was surplus or extra food.

We had to line up for our meals in the mess halls. When we first entered — I can’t remember if we helped ourselves or if the food was served to us — but there was this bowl of white stuff that looked like Crisco. And that was margarine. We didn’t know what margarine was because we only ate butter with our toast. Our parents probably didn’t even know about margarine. The cooks were members, camp people, so usually they didn’t know what to do with these things. Later, the margarine was colored with a yellow dye, but either the cooks didn’t know anything about it or they were too busy to mix it up, so we spread that white stuff on our toast with orange marmalade every single day. We were so tired of that, but when you think about it now, orange marmalade is really quite a fancy jam.

Sometimes we’d come home from school, and I’d smell all this mutton being cooked. We never grew up with any kind of lamb, so all I could remember was the smell of the mutton stew. For years I didn’t want to look at anything that had to do with lamb.

Beef tongue was something new, and the cooks didn’t know how to cook it. You have to simmer or boil it, and you take off the outer skin with the little taste buds. The cooks didn’t do that. They cooked the whole tongue and sliced it, so there was all this skin on the tongue that we ate. I have bad memories of that, and for a long time I wouldn’t even think of eating things like tongue.

Many vegetables were grown right at the campsite, and we ate lots of cabbage. Ice cream and treats like that were available at the co-op, but we never bought them. We never were upset about it either, we just didn’t do it.

My father was a custodian at the hospital, and the hospital employees were served better food than what we got, so sometimes he brought home leftovers like biscuits for us.

When we went to the mess hall we had to wait in line, and it was especially awful when it was raining and cold. Many families didn’t sit together, and the kids went wild because they sat with their friends or went to other mess halls to eat. The older ones I think went to some of the other mess halls where their friends were, but with our family, whoever was there, we always sat together. I’m glad those were the rules. And my mother was a waitress in our mess hall. But even when she was working, the rest of us would be eating together. And even with my father gone, because he was working as a custodian, we’d always sit together.

My mother was a waitress in our mess hall and she always had a pitcher that must’ve been water. I can’t remember what else she did as a waitress, but I’m sure she had to clean up the tables after we ate. Since my mother and father were non-professionals, they made $16 a month each. That really wasn’t much when you still have to buy clothes for your family. Together they made $32 a month, and half of that, my mother’s money, went to my brother, who was a student at Central College in Pella, IA.

At camp they didn’t serve many Japanese foods because they couldn’t get it. The cooks made cabbage otskemono (pickled vegetables), and they served rice but I don’t even know if they had soy sauce. I think it came much, much later. We’d bring home leftover rice from the mess hall and my father would toast it on the potbelly stove and then save it to make okai (rice porridge). Some people probably cooked in their barrack, but we didn’t.

We missed a lot of the Japanese foods that we’d have on special occasions, like sushi on New Year. We missed nishime (Japanese root vegetables), makizushi, inari, teriyaki chicken and renkon (lotus root) that was dried and we had to rehydrate them.

We lived on the farm [in Cortez in Merced County] before camp so most of the vegetables were homegrown. We grew up on lots of veggies and very little meat, which now is really good, but in those days we couldn’t afford meat. At home my parents canned a lot of fruit like peaches, and my mother made apricot-pineapple and strawberry jams. We couldn’t take any of them to camp since we could only take what we could carry.

My mother was on the sewing machine before we went to camp, day and night, sewing sacks together to wrap up the bedding and things. Before the war, we grew grapes and we would sulfur them for pesticides. The sulfur came in 100 pound sacks, so my mother saved them, took out the threads, washed them and sewed them together.

People would complain about the food in the mess hall, but as our family went, you ate what was served and if you didn’t like it, that was just too bad. In a way when you raise your own family it’s similar. I used to make one meal for my children, and no one ever said anything like “I don’t want to eat that.” It was never done; we just ate what was served.

We invite you to view the video of the People's Kitchen Collective “TO THE TABLE,” which was a meal in remembrance of the signing of Executive Order 9066. We center the memories of Japanese Americans as it connects to our resistance today. This meal is also a celebration of continued solidarity between communities of color, specifically Asian American, AMEMSA, Black, Latinx, and undocumented peoples. TO THE TABLE is open to everyone invested in resisting borders and walls, xenophobic immigration policies, incarceration, racism, and the erasure of our cultures. Community partners include J-Sei, The Nikkei Resisters, the Arab Resource Organizing Center (AROC), and activist Flora Ninomiya. With collaborators Marvin K. White, La Pelanga, Misha Abbas, Jun Hamamoto and the San Quentin Prison Origami Class and many more. This is the third in our four-part series from the FARM, to the KITCHEN, to the TABLE, to the STREETS! Learn more at peopleskitchencollective.com/ alenamuseum.com/ foxnakai.com/

Laurel Fujii is a yonsei activist and writer born and raised in the East Bay. She is the program coordinator for the People's Kitchen Collective, an organization that calls people to action through creative, large-scale community meals. Laurel strives to maintain intergenerational spaces for communities of color and has been working in educational non-profits since graduating from UC Santa Cruz in 2013. 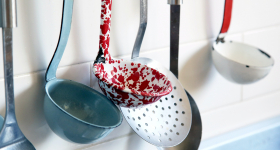