"In arithmetic terms, you were the sum of us. We were going to become mothers."
Erin Jin Mei O Malley
March 4, 2019

You began as a secret. A plus sign instead of a minus. Of course, we thought it had to be a mistake. We had followed all the rules. We had done everything the way the Family Planning Commission had instructed. We were good women who knew that you couldn’t be a good woman and a mother.

So we waited, counting the days until our period. We avoided the man who could’ve done this to our lives, as if the new distance between us would reduce the risk of what we’d already done with each other. We briefly returned to the prayers of our father before abandoning them again. Pregnancy was a religion we refused to believe in unless we had the irrefutable proof of no blood between our legs.

When our underwear remained stainless, we realized that the truth had made itself undeniable. We were going to have a child. Still, we couldn’t wrap our minds around the surprisingly obvious math of conception. In arithmetic terms, you were the sum of us. We were going to become mothers.

In the months that followed, we walked through the city swollen with spring. We couldn't tell if the rain fell around us or straight through us, if the mystery was our bodies or the rain. We watched flowers opening into a new season as if it meant something. As if we too could bloom.

Soon, the units of time that organized our lives began to orbit around our stomachs. Days and years became irrelevant. Our length of time on the planet became insignificant in comparison to how many weeks along we were, how many months we’d been pregnant.

Everyone assumes that a woman and a man make a child, but what they really make is a mother. We’re the only ones who understand that pregnancy is the kind of miracle that’s instituted by a god who blesses everyone around the person actually praying. Wives pushing their strollers on the street shot us knowing looks, and their husbands patted the back of any man standing next to us. We stood still like trained dogs when these strangers reached out to pet us, our smiles as tight as the shirts stretched over our bellies. We scheduled the appointments and took our seats in reception rooms wishing we could do more than wait.

At first, we thought the feeling of you kicking at our insides would be painful. But then we saw the blur of you on the ultrasound, and for a moment, we smiled so wide that our cheeks became sore. We had hoped that the sheer fact of you being our child, of loving you, was enough to keep you from hurting us. But everything made us hurt, even joy. How little we knew about love. Love would not make us invincible. It wouldn’t make us anything more than mothers.

When they told us you were a girl, we wept. Not because we were having a daughter instead of a son, but because we knew we wouldn’t be able to keep you. By now, you’ve probably heard of the fines, how they could take all the furniture from your home if you had no money. Or worse, what they could do to a woman’s body to silence a future of children.

They said there were alternative paths, but none of them ended with you in our arms. You have to know that there was only one option with no choice involved. The solution was unbearable for us to even think of, yet simple enough for anyone to be able to calculate: subtract one child from a mother to give to another woman.

We don’t talk about it. For months afterward, we didn’t talk much at all. We say that it all hurt too much to remember, but the truth is that the pain is why we can’t forget it. Even when we blacked out from fatigue, the body always remembered what we longed to forget. Our muscles still ached from the memory of losing a daughter. We traced the rippled indentations on our stomachs. We asked ourselves who we were supposed to ask forgiveness from.

What were we now, anyway? Yes, we’d given birth to a daughter, but now you’d been handed over to other parents. We were the mothers of other people’s children. We were daughterless and not. Did that even make us mothers? If a woman and a man make a mother, what do mothers without children make?

What we learned was that the symptoms of not having a child are much worse than the ones that come with carrying one. We knew there were other women like us, but that just made us feel even lonelier. We stayed inside for days, avoiding windows and the angles of light that fell from them. Our dreams of you were also our nightmares. Grief had become the name of what settled into the empty space you’d left behind.

It was in winter that we missed you the most, something about it being so cold we could feel the wind sifting through the hollows of our bodies. There was no rain in that season, but if there had been, it would’ve fallen straight through us.

We kept the lights off, so to be briefly faceless in the dark. Our eyes adjusted to the pitch black, and under the blankets, our hands searched for your father, who we pretended could be anybody. After all, what was the man next to us if not a lie we could hold close at night?

When we fell asleep, we dreamt of another woman raising you in a country far from this one. We’d never named you, but she called you something unpronounceable in the alphabet you would’ve inherited from us. We tried to scream at this woman borrowing our blood as her daughter, but when we opened our mouths, a thousand needles dove into our arms. Even after your father woke us up, the feeling of needles in our skin refused to dissolve.

Jerry Ma is a New York-based artist best known for his work as one of the founding members of the groundbreaking graphic novel Secret Identities. Jerry has worked on projects including VIBE Magazine Hong Kong, Kangol Hong Kong, The Smithsonian Museum, some films and of course his own creator owned comic graphic novel, Legend, and his graphic tee line. His website is www.epicprops.com.

Erin Jin Mei O'Malley lives in Philadelphia. Their work appears or is forthcoming in DIALOGIST, Tinderbox Poetry Journal, Cosmonauts Avenue, and others. They are the Managing Editor of The Ellis Review and have received a scholarship from the Lambda Literary Foundation and nominations for a Pushcart Prize and Best of the Net. You can find them at www.explorationsoferin.com. 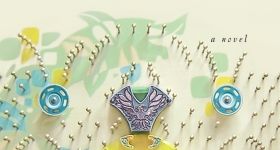