in Memes to Movements: How the World’s Most Viral Media is Changing Social Protest and Power by An Xiao Mina
Ann Thuy-Ling Tran
May 30, 2019

When Richard Dawkins coined the term “meme” in 1978, he may not have anticipated that this human cultural practice would affect political change as profoundly as it has within the past few decades. With the proliferation of internet engagement in participatory culture, memes today are ubiquitous; they reach beyond even social media, appearing in television shows, films, T-shirts and protest posters. An Xiao Mina’s book, Memes to Movements: How the World’s Most Viral Media is Changing Social Protest and Power, is a timely and essential historiography of the importance of memetic discourse within contemporary social and political movements. As Mina shows, no single phenomenon can highlight the link between the idiosyncratic rise of the digital and political as well as the meme. Memes to Movements pushes forth her imperative argument that memes have the ability to be silly or powerfully political, and at their best, both.

What is immediately striking about Mina’s argument is her extended definition of a “meme,” which is not limited to the typical image accompanied by a witty textual statement. From cat videos to hashtags to selfies to digitized rainbow flags, memes, for Mina, constitute any “unit of culture” which is shared, replicated, remixed — remade “with a twist” — and redistributed through its virality. With her book’s geopolitical focus on the United States and China, Mina begins her exploration of the memetic cultural phenomenon in the context of the Michael Brown, Ferguson protests in 2014 with the use of “hands-up-don’t-shoot” photos as “performative gestures” reenacting solidarity, and the contemporaneous Umbrella Movement regarding police violence in response to Hong Kong’s increasing “issues of democratic rights and universal suffrage.” That both movements had direct influence on each other through the network of online “cross-over,” via hashtags and selfies, highlights the transformative ability of digital culture’s effect on politics and international strategization.

Though cat memes are generally considered “low-culture” and perhaps apolitical, Mina’s first chapter shows how cat memes can also illuminate the capacity for the most mundane imagery to be politically charged (i.e., #CatsAgainstBrexit). The remixing of cat images — the cropping of an original cat image in another context with different political messages — illustrates the individual capability to create memes and spread content that contributes to social change that would otherwise be impossible in “the framework of traditional institutions and organizations.” Along with their ability to build community in non-physical space, memetic “affirmations of identity and beliefs” become the basis through which “feels” or feelings get circulated across the globe. Chapter two, entitled “All About the Feels,” walks through the cultural memetic significance of community affiliation and affirmation through the profile picture, especially in its use leading up to and following the U.S. Supreme Court’s ruling in favor of marriage equality in 2015. The individuated use of the selfie overlaid with the rainbow filter expanded geographic space as political platform for expressing solidarity that extended beyond the LGBTQ community. Mina also discusses the prominent subversive strategies used by activists in China to undermine the “Great Firewall” enacted by the Chinese government to censor dissent online. It is in this section that Mina categorizes memes into seven types: image memes and image macros, text memes, video memes, physical memes, performative memes and selfie memes.

Chapter three analyzes the charismatic strategies behind the ways in which memes garner viral attention to spread their political messages beyond the communities that created them. She takes the examples of Chen Guangcheng’s unjust imprisonment for human rights activism and subsequent illegal detention in his own home and the Trayvon Martin symbol of the hoodie as two incidents that “sparked a strikingly similar series of memetic strategies to drive attention.” Chapter four positions meme culture as a form of “narrative building” wherein consumers-as-creators construct their own narratives while also contesting, shifting and disrupting dominating ones. While memes are commonly characterized for their ephemerality, Mina argues for their lasting contribution to larger political narratives.

In chapters five and six, Mina explores the flipside of meme culture. Mina considers how memes dominated the 2016 U.S. Presidential election and how this “meme magic,” as alt-right groups called it, centered the Trump campaign’s memetic utterances, such as #MAGA which added a catchy dimension to his underestimated election. Mina comparatively revisits the Great Firewall’s ability to readily adapt to activists’ subversive strategies through “counter-memes” and “counter-narratives” as a propagandistic strategy of co-optation. Chapter six specifically examines the meme contest, or “cat-and-mouse” game, in the vying for power by those at the top (oppressive or ineffective governments of China, the United States and Mexico) and activists in the physical and memetic spheres of public/political fora.

In her conclusion, Mina urges that meme culture be kept alive through relentless creation, remix and redistribution, lest it “wither away into obscurity.” Such apprehension can be read in the Trayvon Martin hoodie campaign, which was pushed forth because of the decreasing social attention over a matter of weeks following Martin’s death. Likewise, the issue of trending topics indicates in its very name the fact that memetic success is largely predicated on its temporality of attention, likes and visibility, which signals a beginning and end to its virality. Furthermore, as “meme communities … slowly [go] underground in China” or anywhere else, there is further emphasis on the ephemerality of memes. Some questions provoked by Mina’s text are: What would a methodology of archiving unsuccessful memes look like? Based on the logics of user-generated algorithms, what might we make of the movements that failed — movements that did not have the numerically logical platform as say, one of celebrity status? And lastly, what might those memes tell us of social movements, their strategies and their socio-political landscape? Mina’s long overdue contribution to the analysis of memetic culture provides a useful model for what taking memes for all their political and cultural seriousness looks like. Memes to Movements is an essential contemporary work especially useful to the disciplines of media studies, communication studies, sociology and ethnic studies and is a vital text for community and political organizers today to continue the ongoing cultural work of enacting change through memetic political movements.

Ann Tran is a graduate student in Comparative Literature at the University of California, Irvine where she studies issues of race, comedy, and new media. On her free time, she likes to watch a lot of TV, especially 90s sitcoms. 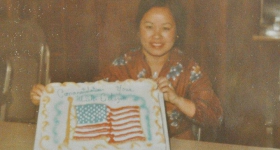