When I was in middle school, I had one particular meal with my family that still sticks in my memory. It was a normal night, except for the fact that a new Harry Potter book was going to be released that evening and I was going to go with my sister to the bookstore for the party. We had a quick dinner of a large cheese pizza from the local Big Y grocery store. My dad arrived home later that night and came home to a half-eaten box of pizza left out on the dining table. He started shouting about cold pizza, saying, “How am I supposed to eat cold pizza?!” I offered to heat it up for him, but he put the pizza down and yelled, “That is not the point.” All I remember after that was running upstairs crying. My mom sat on my bed with me trying to calm me down as she explained why my dad was so upset about cold food. She said that in Taiwan, he grew up hungry. “When you spend so much time being hungry you expect something out of food when you have it,” she said.

I haven’t always romanticized the connections between family and food. Growing up as a Taiwanese Korean American, I cast aside my family’s foods in favor of the dishes more commonly found in my white friends’ homes. But confronting my own insecurities of eating Asian American has launched a yearning for scenes akin to David Chang’s Ugly Delicious “Home Cooking” episode. In this episode, David and Peter Meehan visit David’s mom’s house as they are prepping a Korean American Thanksgiving meal. David’s mom busily works around him and Peter and makes jokes about baby David. I love everything about this scene: the sharing of stories, the sharing of food, and the combination of memory and meal. For me, eating Asian American meant seeking the stories that food tells of cultural tradition, family and livelihood across countries and time. But this also meant that I neglect the tough stories that are often too hard to be spoken aloud.

When my mom sat me down that night to try to explain what an empty stomach feels like as it echoes inside you decades later, I chose to ignore any sign that food could cause such pain. Maybe the generational pain was the reason why my parents never told my sister and me these stories in the first place. But here I was ignoring a story that this cold pizza was telling me about a past that continues to affect my family today. These two types of food stories — one about abundance and the other about scarcity — are not independent. It often happened that through meals of abundance I could talk to my parents about life in their home countries. And also through meals, like the cold pizza, I could have a conversation about trauma and challenge. Abundance and scarcity, as told through food, is only part of a larger immigrant story. I continue to watch my parents reconcile generations of food trauma from their own experiences of hunger while also experiencing insecurities in adapting to the palates catered to in the United States. And the cold pizza was only the beginning of understanding lasting traumas of food insecurity.

These traumas are often evoked in our food choices and food consumptive practices. They become so easy to ignore because they are hard to talk about; parents and grandparents often want to hide these stories from their children and grandchildren. For Asian Americans, migration to the United States often occurred as a response to political uprisings, violent warfare and impoverished living situations in their homelands. However, in searching for a better life, these communities can fall through the gaps of America’s food system. In a 2015 article for NBC on hunger in Asian American elderly populations in New York City, Richard Lui described food insecurity in those communities as a “hidden hunger,” often invisible to outsiders because individuals exhibit behaviors non-traditionally associated with food insecurity. Hidden hunger in Asian American communities is often exacerbated by language barriers and a lack of translated resource materials detailing access to social welfare programs such as food stamps, food assistance programs and food banks. These barriers make it difficult for them to receive aid and food resources, and to access “adequate food” needed for food security. While food banks and food aid are the common solutions aimed at addressing food insecurity, these solutions often don’t work for the Asian American community, whose food insecurities are often ingrained in trauma.

The model minority myth also provides a double burden that masks lower socio-economic Asian American communities. The stereotype of the model minority depicts Asian Americans as wealthy and highly educated and therefore not needing public assistance, erasing the lasting traumas from histories of hunger, violence and insecurity that many immigrants, refugees and migrants experienced. American expectations of Asian American culture also perpetuate the idea of a monolithic food culture built around abundance, sharing and wealth. Americans familiarize themselves with Asian food through trendy regional cuisines, exotic foods and new restaurants, while shows, movies and other forms of media regularly show Asian American families coming together around food and meals. The aforementioned “Home Cooking” episode of David Chang’s Ugly Delicious is a good example of how media outlets also play on the imagery of food, family, abundance and sharing. While these food practices are a component of some Asian American homes, the oversimplification is damaging to the lives of Asian American families for whom these images are simply not the reality.

Lower-income Asian American families are most at-risk for food insecurity and continue to be invisible in much of American society. Their relationships to food and hunger and their ability to navigate a brand new food system in America are often complicated by the memories of political, financial and social insecurities they endured in the countries they left. And yet, masked by society’s expectations of Asian Americans, their hunger often goes unnoticed, and they remain under-protected and under-served when it comes to food aid and resources.

In this series, Finding Food Securities, writers explore the complex navigation of what food security means in Asian American communities and how chronic insecurities manifest themselves across generations. Teresa Mok’s piece in this series further explores how images of abundance and food complicate Asian American body image ideals and plastic surgery. In Sandie Chen’s “The Ghosts at our Dinner Table,” we get a generational story of hunger spanning her grandfather’s flight from China in the 1940s to shopping at California grocery stores today. We hope that these stories only begin to bring greater attention to the chronicity of food insecurity among Asian American communities.

Sarah Huang is a PhD Candidate in Anthropology at Purdue University. Her work focuses on immigrant engagement in U.S. mainstream food movements and agricultural development in Vietnam. You can find more of her work here: https://www.sarahdhuang.org/ 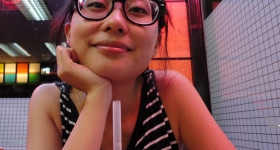 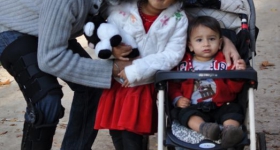