"...the inimitable scent of your first mother, a chemistry you were born to understand..."
Joon Ae Haworth-Kaufka
December 20, 2021

The adoption agency called your parents in the middle of the night in January. A baby belonging to another family was supposed to fly to the United States but had gotten sick. They put you on the plane instead.

Your parents could hardly believe it. The baby girl they’d been waiting months to meet — the child they wanted for years, for whom they’d been through so much — was on her way to the Chicago O’Hare International Airport, coming halfway across the world to join their family. They had conjured an entire life from a single black and white photo of a wide-faced, chubby-cheeked, narrow-eyed baby, the only picture they had seen of you, both proof of your existence and that they could, indeed, love a child born to someone else, from somewhere far away.

Later, they would joke that they had gotten you basically sight unseen. Thank God you turned out a good one, they laughed. Or else we’d have had to send you back. Later, you will acknowledge this terrified you, despite your laughter.

They flew out that day from Detroit to Chicago. Later that night, a crowd of expectant parents clustered around the arrival gate. Some held bottles and blankets, diaper bags and shiny new American toys. Some clutched pictures and the paperwork to match themselves with their new child. Anxious mothers clasped their hands at their chests to calm racing hearts. Whole families filled rows of black leather and metal tandem seating, all waiting for the arrival of the new family member. Children stood at the large windows, cupping their hands to the glass to decrease the glare, trying to catch their first glimpse of their new brother or sister.

As the babies emerged from the gate, parents swarmed the social workers, who confirmed identities and executed the careful transfer of each baby from one set of arms to another. The parents stared into the faces of their new children to take in the details of their babies in real life for the first time, touching their cheeks, kissing their heads, pressing them tight to their bodies before passing them between siblings, aunts and uncles, grandparents and friends.

Your parents waited quietly for you in the throng of the other families, just the two of them, holding hands in the midst of so much commotion. It was so loud, your mom always said. I wanted to plug my ears. They had left your two older brothers at home with a neighbor because they couldn’t afford the extra plane tickets.

You were one of the last babies to get off the plane. When your caseworker stepped into the terminal with you in her arms, your mom said she recognized you right away. There was her daughter. There was the child she was supposed to have, the reason she wasn’t able to have a biological child. Everything happened for a reason. Your mother reached out for you, and the caseworker handed you over. You clutched on to her so tightly that your new mother was surprised by your strength. Immediately, you knew I was your mom, your mom always said. You just knew. You weren’t about to let go. In that moment, her family felt complete. All the noise faded to the background: all the boarding announcements, cheering families, rowdy children tired of the airport and all the crying babies. So many crying babies.

You didn’t cry like all the other babies, your mom always said. You looked around and took it all in. You just knew that you were home. Though it was days later that you started to earn the nickname The Screamer.

They told you this story every year on the day they celebrated as your birthday, a medical hypothesis based on a physical assessment, a date inscribed on an American birth certificate produced months after the fact.

You don’t have a birth story. You have an arrival without a departure. There are no stories from before the airport, no stories about who attended your birth, which family member you looked like, if you struggled with breastfeeding or sleeping through the night. There were no stories of the first time you noticed your hands, could grasp a toy — or if you had toys at all. No rolling over, no sitting up, no first solid food. There are no doting nicknames, no knowledge of your family-given name.

You can watch scenes of this airport arrival in your mind as if they are from a movie you’ve watched so many times that you’ve memorized it. Sometimes you wonder if what you see in your head is real, like maybe you can truly access these early memories, like maybe the intensity of that moment had carved pathways in your brain as deep and permanent as the valleys and folds of the brain itself. That moment of immutable change, an irrecoverable Koreanness left behind, a loss so profound that memory becomes monument. 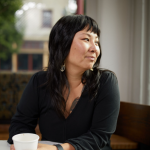 Joon Ae Haworth-Kaufka (she/they) is a Korean adoptee who was born in Seoul and grew up outside of Detroit. Her work has appeared in The Portland Review, Mid-American Review, Poets & Writers, Colorado Review, Kartika, among others. She is a Tin House scholar, community organizer for racial and economic justice, and an adoptee rights advocate who seeks to reclaim the adoption narrative for adoptees, decentering adoptive parents and the multi-billion dollar adoption industrial complex. "Departure" is a story from her novel-in-progress. 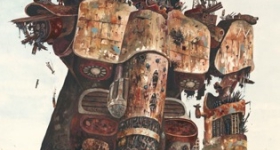