The events of 9/11 created a fork in my life's path that led to a passion that has consumed thousands of hours to date. I have faced a constant fear and loathing from a few fellow Americans who project their ignorance, anger and insecurity in response to my countenance. I found creating cartoons as my weapon of choice to bleed some of these emotions out with a sarcastic edge. That process has continued unabated with many plot twists and turns, including me dressing up as Captain America, until a few months ago when a few personal challenges in life have forced my cartooning pen to be put on hold.

Then a day before the 14th anniversary of 9/11, news came out of Chicago of an attack on a 53-year-old Sikh man. A teenager assaulted the Sikh man while calling him 'Terrorist', 'Bin Laden' and 'Go back to your country'. It was not surprising to hear this news. It has become all too common in the aftermath of 9/11 for Sikh men and boys to face this verbal abuse. I face it first-hand. But the physical nature of the assault was unsettling.

The very next day, on the eve of 9/11, came the news of mistrial ruling in the case of a police officer in Alabama who physically manhandled an Indian grandfather out on a morning stroll. Someone had called 911 complaining about a skinny black man appearing suspicious. The perceived blackness was the first racial impulse that fed into a violent chain of events -- the attack captured on a dash cam shows the unprovoked attack on the elderly gentleman which left him partially paralyzed. The jury deliberated four times but could not come to a unanimous consensus.

These two stories combined lit a fire hot enough to boil up the urge for an illustrated response.

Then came the news that the Chicago attack will not be treated as a hate crime by the county prosecutor. This was the last straw. The headlines were streaming across the big screen in my head: 'Bin Laden Spotted in Chicago' and, 'Appearing Black is Enough to Endanger Police Officers'.

So America here you have it, the fearful ghosts of our imagination that keep claiming innocent victims. from suburbs to big cities. 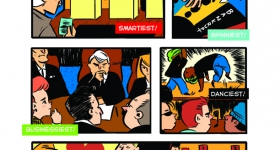