An alleged UCLA student named Alexandra Wallace posted a YouTube video blog with inflammatory remarks against Asian students who share the library space with her.

I remember finals week at UCLA. I was an English major, so usually this meant chaining myself to my laptop surrounded by a foot-high stack of Shakespeare in the library.
Powell, the main campus library, is a landmark at UCLA. Ray Bradbury wrote his famous novel Fahrenheit 451 in just nine days on a rented typewriter in the basement of Powell. And more recently, the library made news when UCPD officers tasered a student after he resisted and refused to show identification.
Last Friday, an alleged UCLA student named Alexandra Wallace, posted a YouTube video vlog with inflammatory remarks against Asian students who share the library space with her.
At the peak of her rant against Asian students living in Westwood, the neighborhood surrounding UCLA, she continues her complaint against Asians on the phone in the library:
“I'll be in like deep into my studying, into my political science theories and arguments and all that stuff, getting it all down, like typing away furiously, blah blah, blah, and then all of a sudden when I'm about to like reach an epiphany... Over here from somewhere, "Ooooh Ching Chong Ling Long Ting Tong, Ooohhhhh.”
Alright, I’ve felt that same irritation against loud people in libraries -- it’s just not the place to do that. But Wallace takes it to a whole new level, singling out the largest ethnic group of undergraduates admitted to the university last Fall, according to UCLA’s Office of Analysis and Information Management. http://www.aim.ucla.edu/enrollment/enrollment_demographics_fall.asp
It gets worse:
“I swear they're going through their whole families, just checking on everybody from the tsunami thing. I mean I know, okay, that sounds horrible like I feel bad for all the people affected by the tsunami, but if you're gonna go call your address book like you might as well go outside because if something is wrong you might really freak out if you're in the library and everybody's quiet like you seriously should go outside if you're gonna do that. “
Talk about bad timing.
She’s not the only one who took offense to all the “ching chong.” Since the video was posted on Friday, YouTube users not only “disliked” the video, but they posted Wallace’s email, phone number and a link to her profile on Examiner.com. Yikes -- of all places to launch a racist tirade against Asians, YouTube is probably the worst.
YouTubers, some Asian, others not, have posted responses. Inevitably, YouTube comments pushed back against Wallace with the same ignorance and bigotry -- with more than just blonde jokes. Others are have a slightly bigger picture. One vlogger points out, tongue-in-cheek, that Wallace is simply emulating America as a whole. After all, Rush Limbaugh went on a ching-chong rant of his own a few weeks ago.

Absent are the perpetual dining hall feasts, flashy Quidditch banners and plush armchairs of Gryffindor’s common room. Harry cannot return to Hogwarts, or risk arrest, persecution and death. Instead, the heroic trio travel to remote, beautiful locations while attempting to destroy remaining Horcruxes, the cursed items that contain a part of Voldemort’s corrupted soul -- and to help keep the dark lord from death. 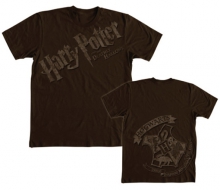 Part 1 of Harry Potter and the Deathly Hallows comes out today. In celebration, we’re giving away some Harry Potter gear -- for free!

You could win a Harry Potter t-shirt or a horcrux-shaped USB flash drive. All all you need to do is tell us who your favorite character is.

There are two ways to enter, and you can enter twice: 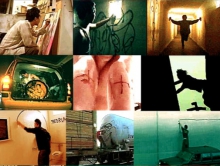 Filmmaker Harry Kim followed urban artist David Choe for seven years, documenting Choe's turbulent coming-of-age as an artist. The resulting documentary, "Dirty Hands," isn’t simply about art -- it is art.  Kim brings us beyond the spray paint, the urine, and soy sauce that Choe uses on his canvases, and presents a strikingly intimate, raw portrait of the artist.

Microsoft's Kin ad has sparked a bit of a controversy.

The scene: a hipster hoedown.

The people: young, fun-loving, and socially networked. Primarily white and heavily bearded, but it's a hoedown after all.

The one Asian guy: sexting?

Two years ago, music artist Dawen and fellow singer-songwriter Spark*shop sat down in a cafe and had an idea: an Asian American musical showcase during Independence Day weekend, in Chicago.

"That's where the name, Declare INDIE, came from," Dawen said. Dawen and Spark*shop launched their first show, along with two other artists, in July 2008.

The show was originally branded "Declare INDIEpendence," since shortened to Declare INDIE. But the show's success, Dawen said, has only grown.

Saving face with the ladies behind Disgrasian, the year’s hottest Asian American blog. 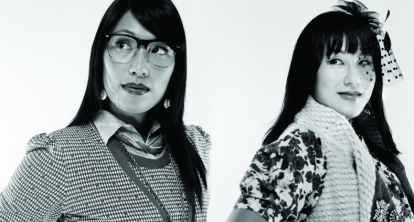 OUR COVER GIRLS, Diana Nguyen and Jen Wang of Disgrasian.com pay homage to an iconic image of a lone journalist: industrious behind a typewriter, accompanied by a tall bottle of whiskey and wheezing through a pack of cigarettes.

According to an announcement posted today on Hydeout Productions, DJ and hip hop producer Nujabes passed away late last month in a car accident at the age of 36.

The band embarks on their first major national tour this week, starting in Philidelphia. They will be joining up with Cynthia Lin, Magnetic North and Taiyo Na in their East Coast shows.

If you caught last night's Season 6 premiere, you know Japanese actor Hiroyuki Sanada has joined the cast on the island, playing what appears to be the leader of a group of the Others.

Sanada is a major Japanese actor, who is perhaps best known for his role in the postmodern classic Twilight Samurai. He has recently crossed over into several major western films, including Danny Boyle's Sunshine, The Last Samurai, and Speed Racer.

While Sanada's character raises more questions in the Lost series (namely, who is he?), we know one thing already: he's a martial arts Asian! Every desert isle's gotta have one of those, eventually.

Saving Face With the Ladies Behind the Disgrasian Blog 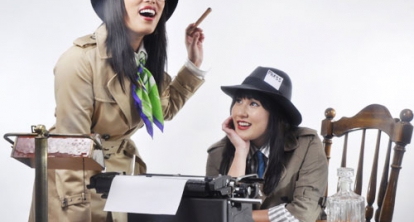 Our cover girls, Diana Nguyen and Jen Wang of Disgrasian.com pay homage to an iconic image of a lone journalist: industrious behind a typewriter, accompanied by a tall bottle of whiskey and wheezing through a pack of cigarettes.

It was a full house at Santa Clara University for Monday night's
basketball game, but many of the fans weren't there to support the home
team. For many, Harvard guard Jeremy Lin was the highlight of the game. Lin, a Palo Alto native
and senior captain of the Harvard Crimson, has wowed fans and opposing
teams alike this season with his scoring ability, court knowledge, and
a balanced skill set that could take him to the NBA. Those skills were
on display Monday night as Lin finished with nine assists and three
steals, despite only scoring six points. Combined with a solid showing
from its underclassmen (freshmen Kyle Casey had 27 points) Harvard won
74-66 after having led for most of the game. Here are some photos from
the event.

Opposing teams by now are well aware of Jeremy Lin, and he draws extra defenders as he drives the lane.

Los Angeles-based singer-songwriter Dawen embarks on his solo acoustic tour tomorrow at the Silk Road Caf√© in New York City. Dawen will be spreading his soulful vibes coast-to-coast and across the globe on his American Me Tour, which will showcase some intellectually powerful lyrics, wrapped in his neo-soul style.

Dawen launched his debut album, American Me at a live Los Angeles release party this past September, and is continuing his tour throughout New York and Hong Kong this month.

I had a chance to catch Dawen for a quick Q&A before he hopped on his transcontinental flight.

Let's start off with a bit about your music. How would you describe your style?

Some main influences of mine are Erykah Badu, and I'd have to say a vocal influence from Maxwell. I'm deeply affected by the influential jazz of Charles Mingus. I'm also inspired by Stevie Wonder. Bob Marley is another figure I absolutely love, because a lot of the music that he made was palatable and also very serious in terms of its socio-political message -- which is something that I consistently admire.

Oh boy. Here's an original idea -- according to this trailer, detective show Cold Case is featuring crime in Chinatown in tomorrow's episode. From what I gather from the trailer, the plot will be rife with Asian gangsters and lots of Chinese people doing some sort of mysterious, ancient rituals.

Wait, wait, I've heard that one before! Didn't the X-Files do an episode like that? Or was it Law and Order: SVU? Numb3rs?

To state the obvious, crime shows seem to have an odd fixation on Chinatown, which is almost ubiquitously portrayed based on huge cultural assumptions and gross cultural romanticism.

I mean, just take a look at this trailer -- did I hear a gong?

Director Faiza Ahmad Khan's behind-the-scenes documentary, Supermen of Malegaon, shows us DIY superpowers as she follows a ragtag group of amateur filmmakers in the titular textile town of Malegaon, India.

Led by Malegaon native Shaikh Nasir, the patchwork film crew produce a hyper-localized parody of a Superman flick. In their spirited, low-budget version, Superman dances about in blue flip-flops with bright red socks, has a 24-inch waist and often is the one in need of rescue whenever he encounters water.

Supermen of Malegaon is a montage of charming surprises. Nasir and his local talent improvise their own Hollywood resources, draping green cloth over a cargo truck for a green screen and using a bicycle in lieu of a dolly. The video editor, also the sound producer, sacrifices a full head of hair to fit an acting role as Superman's nemesis. The die-hard crew suffers production setbacks when Nasir accidentally dunks his only hand-held video camera in a river and his leading actor announces his last-minute wedding.

At the backdrop of all the excitement, Khan reveals a group of industrious men who also dream. Some want to escape the poverty of Malegaon, to move on to do major movies. Others, like Nasir, vow never to leave Malegaon as they strive to bring laughter and happiness to the locals through film. Yet all seem to share the same zeal for the art of filmmaking and the unlimited resource of human imagination.

Superman of Malegaon will be screened tonight at 7:15 at the Roxie Theater in San Francisco, a worthy opener for the 3rd I South Asian Film Festival.

Looming skeletons of decommissioned ships dwarf the figures of workers trudging barefoot along the Chittagong beachfront in Bangladesh. The men navigate around piles of rusty iron, the vestiges of the ships that made their final stop at the inaptly named "Peace, Happiness and Prosperity"
shipyard.

"We work like animals," one man says, wading ankle-deep in sandy muck. He's pulling a heavy cable over his shoulder as he turns to the off-screen cameraman.

In his third feature-length film, IronEaters, social documentary filmmaker Shaheen Dill-Riaz follows the frustrating experience of migrant workers from Northern Bangladesh. The workers, primarily farmers, venture south to the Chittagong shipyard when famine strikes at home, hoping for a way to support their families.