As the community gapples with hate crimes, discrimination and insensitivity, who speaks for Asian America?

After the September 11 terrorist attacks, when some Muslim and Sikh Americans suffered from an anti-al-Qaida backlash because of their turbans or skin color, it was a little-known organization based in Washington, D.C. that began making vocal declarations against hate crimes and violence.

South Asian American Leaders of Tomorrow (SAALT), comprised of first- and second-generation professionals and students, quickly produced a report entitled “American Backlash,” documenting 645 hate crimes against Americans of South Asian and Middle Eastern descent in the week following September 11. Among the incidents chronicled in the report was a series of death threats lodged against Arab American news editor Osama Siblani, who suspected that at least some of his harassers had confused him with the al-Qaida leader Osama Bin Laden. SAALT board member Deepa Iyer also finished work on a documentary called “Raising Our Voices,” which explores hate crimes against South Asian Americans over the past decade.

Indeed, since late 2001, SAALT has become a regular media presence with its national campaign to educate the public about South Asian hate crimes. In doing so, the organization has taken on a perennially unfilled role for Asian America: a nationally-effective spokesperson (or spokesgroup, in this case).

Despite a number of respected business and cultural leaders, and an increasing number of government officials of Asian heritage, the Asian American community still lacks individuals with the recognition or status to speak out effectively on behalf of the community in times of need. In situations that involve outright discrimination or instances of racial or ethnic insensitivity affecting the Asian American community, we are rarely poised to respond in an organized, cohesive fashion.

Given the state of world affairs, this hole in public leadership has become increasingly apparent, some community organizers say.

“I think what’s happened since September 11 is that there has been a dearth of spokespersons for the community,” says SAALT’s Iyer. “And it gives the [rest of America] the perception of a lack of leadership.

“We all should be doing a better job of speaking out on these issues. Beyond issuing press statements and press releases, we need to engage with government entities, with local groups, with the media, (apply) leverage at a lot of different levels to make sure that what’s happening with this community is coming up to the mainstream. We have an obligation to try and do what we can to make sure our voices get heard at levels that count.”

Sometimes, the lack of a spokesperson can be a catalyst, transforming people into leaders. In 1999, Alberta Lee found herself catapulted into the spotlight when her father, a nuclear weapons scientist, was falsely pinpointed as a master spy for China.

Lee had grown up in Los Alamos, New Mexico, and led a quiet, apolitical life until she was jolted into action after reading a story in the New York Times on March 9, 1999. The article, which ran under the headline, “U.S. Fires Scientist Suspected of Giving China Bomb Data,” accused her father of stealing American nuclear secrets on behalf of the Chinese government.

Shocked by the news, Lee was initially unsure about what she should do. There was no one — no Asian American with a nationally recognized voice — to advocate for her family. Hesitantly at first, Lee became a crusader for her father’s cause.

But as time passed, and her father remained confined in a jail cell, Lee became more visible at rallies and community events across the nation. Fighting against her fear of public speaking, Lee began making impassioned speeches demanding her father’s release.

“I’d only spoken in public once before — to read a story in a creative writing class,” she recalls. “The very first moment when I felt compelled to speak was when my father was arrested in December 1999. I was terrified, but I was so outraged that I had to stand up and say something. I was furious with the way the detention hearings went. The government railroaded my father and didn’t give us the opportunity to present our side of the story.”

Lee took the podium because there was no one else, she says. “I kept looking for someone to talk to, someone who could speak up for us,” she recalls. “I wished we had a Jesse Jackson.

“By and large, I’d have to say most Asian Americans are apathetic. For me it took a family member being wrenched into the spotlight to become politically awakened. One thing I try to do now whenever I speak or write is to encourage Asian Americans to be vigilant — not just for families or loved ones. Not just to question authority, but to read between the lines when they read the paper. People sometimes have to have something shake up their lives before they get it.”

Asian Americans like Lee feel a need for a national spokesperson whose visibility would help boost awareness of Asian American issues. And yet, given the historical, geographic and ethnic diversity within the Asian American community, can a single spokesperson — or even a few — represent such a disparate population with such conflicting interests and political ideas?

SAALT’s Iyer emphasizes the importance of maintaining “a multiplicity of voices,” as well as making sure that leaders are truly connected to the people they claim to represent.

Joselito Laudencia, executive director of Oakland, CA-based Asian Pacific Environmental Network, agrees. “There is no magic formula,” he says. “It is a step-by-step process of creating leadership within our communities. We need to create leadership that is accountable to, responds to, and reflects the needs of our communities. In American society, we tend to elevate certain individuals as leaders, and everyone thinks that’s a reflection of the community. We have to make sure we prop up leaders who are accountable to a base of community folks.”

Accountable leaders could also galvanize more Asian Americans to raise their own voices, says Daphne Kwok of the Asian Pacific American Institute for Congressional Studies. “If we have real leaders who can rally the troops, who have a message that inspires the Asian American community, then we’ll be able to see a lot more activism in our community.”

Differences in political history, language and immigration patterns have been a long-standing obstacle to political unity among Asian Americans.

“The Asian American community doesn’t really see itself as one community, which is ironic because everyone’s an immigrant here,” says Daphne Kwok of the Asian Pacific American Institute for Congressional Studies, and a former executive director of Organization of Chinese Americans.

The challenge of finding common political ground among Asian Americans on a national level becomes even greater after we take into account differences in language and generational perspectives.

Board members say the move was intended to reflect the times. “The younger generation is beginning to view themselves [as South Asian],” says SAALT Board of Directors member Debasish Mishra. “We had to be in tune and in touch with that point of view.

“To the extent that we [Indian and other South Asians] share a common fate, a common experience, it was better to speak with a wider scope. We don’t want to exclude people simply on the basis of national origin.”

The tendency to separate along nuanced identities within the South Asian community extends to all of Asian America. Looking back, the term “Asian American” is a purely a political construct (see Gordon Lee’s “The Forgotten Revolution,” page 24). Activism and the climate of change of the late-1960s is the reason that the term “Asian American” was created in the first place. Under a unified pan-Asian American identity, the community began building more political clout. Three decades later, however, many Americans of Asian descent still see themselves primarily as members of a specific ethnic group.

“Generally, I would agree that second-generation [Asian American] students who have a developed sense of ethnic identity would be more likely to think in pan-Asian terms, but this is a complicated issue,” asserts Dennis Arguelles, the assistant director of UCLA’s Asian American Studies Center, in an email interview. “Students today are far removed from the days of the ‘60s and ‘70s, when pan-Asian organizing was most relevant. Again, the experiences of students today are also vastly different. Organizations still develop primarily along ethnic lines. Many students were immigrants themselves and there are often divisions based on immigration status. Class, geographic origin, gender, sexual orientation — all of these factors also play roles.”

For numerous political and social efforts, bridging these differences through strategies such as bilingualism has brought measures of success. Alberta Lee discovered the importance of speaking two languages — however haltingly — when she reached out to first-generation Chinese Americans to proclaim the innocence of her father, Wen Ho Lee, the nuclear scientist who was wrongly accused of spying for China in 1999.

“I speak Chinese like a 7-year-old, but I was able to communicate,” Lee says. “People were extremely interested. The audience that was my parents’ generation acted like I was their child.”

And it is a common language that brings the young and elderly together at 665 Clay St., a cramped apartment building in San Francisco’s Chinatown, where a dingy communal kitchen echoes with English and Cantonese chatter. A group of teens, seniors and a few small children face off over card games. Though it looks like a jolly social gathering, this is also a meeting of two generations of activists. The teens are youth leaders in an after-school program at the Chinatown Community Development Center; the seniors work with the center to lobby for issues like affordable housing.

“All of our youth are bilingual; that’s an amazing, tangible resource,” says youth organizer Jane Kim. “They can go to City Hall and speak, and then they can go back into the community and speak with parent figures.

With all its diversity, the Asian American community is less in search of any individual spokesperson as much as a loud, clear voice in public affairs. But as we strive to form that voice, we should keep in mind the lesson of the original Asian American Movement: our strength, and our visibility, are dependent on our ability to cooperate in spite of our perceived differences.

“There’s a tendency for people to want to see themselves as distinct, as unique. That’s especially true for the South Asian community, where there are so many identities at play,” says SAALT’s Mishra. “But we have to understand that no matter what the distinctions are that we see among ourselves, they aren’t very clear to people outside our communities. They’ll treat us like a group whether we see ourselves that way or not. We need to understand where our commonalities are and come together.” 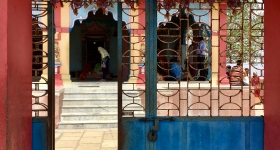