If you grew up in an East Asian household, chances are you know about ear picks. For those who don’t, an ear pick is a thin stick, generally made out of aluminum, plastic or bamboo. Some have decorative features on one end, like the Hello Kitty mimikaki, while others are more functional in their aesthetic. On the other end is the all-important scoop, which digs around the ear canal, prospecting for tiny golden treasures. For some, ear cleaning is a family tradition, a mother or grandmother or aunt’s reason to live. Others seek out public services, like the local barber, who can trim, shave and probe, all in one sitting. Still others prefer to conduct their earwax extraction independently. Patience and precision required.

While the provenance of ear picks is unknown, and the cultural obsession with ear cleaning even harder to trace, a new study does help explain why Asians have long favored the scoop over, say, the kinder, gentler cotton swab. It also means that if you’ve ever had a non-Asian boyfriend or girlfriend or houseguest who found your ear pick tucked away in the nightstand, in the drawer that no one is supposed to open, you finally have scientific justification for your weird little habit.

A team of Japanese scientists recently discovered that earwax comes in two types, wet and dry. About 95 percent of East Asians have a genetic mutation that gives them dry earwax, as opposed to 97 percent of Europeans and Africans who have wet earwax. Dry earwax is characterized as grey and flaky. (Thus the need to scoop it out.) Wet earwax is honey-brown and moist. Earwax in Southern and Central Asians is roughly half wet and half dry.

Speaking of halves, while the scientists studied the earwax gene in 33 ethnic groups, there was no research on people of mixed heritage. Which gene type would such an individual inherit? In an informal survey conducted on hapas.com, four out of seven respondents claimed to have the wet variety, and the rest had the dry. One individual had fickle earwax, which changed depending on his environment. And yet another man who has lived in Japan for the past five years wrote that his earwax had actually evolved—from wet to dry. Around the world, earwax and identity conflate.

So what kind do you have?

If you’ve never looked or thought about it, the King’s Idea ear scope may be just the device you need. It looks like a periscope attached to a battery pack, consisting of a camera and a light at one end and a viewer for peeping at your buildup at the other end. For $90 you can shine a light into your inner ear and tell all your friends about what you saw. —Sabrina Tom 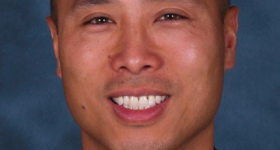