Neela: One of my earliest moments of musical definition came when I went to see Guns N’ Roses play in Dayton, Ohio. I was 13 and Axl Rose’s pasty white skin and shrieking lyrics fueled my pre-teen angst. Seeing them live was going to be the most exciting night of my young life.

But that particular day, Axl was in a bad mood. He decided not to come out on stage, and when he did at 2:30 a.m., he berated the audience. I still screamed my lungs out for him as he ran around the stage in those unfortunate white spandex hot pants, but my heart was a little broken.

But what I remember most from that concert is that Seattle-grunge band Soundgarden opened the show and even from my outlying stadium seats I could tell that the hairy guitar player was Indian. That moment of recognition with Kim Thayill—who Rolling Stone went on to list as one of the 100 greatest guitarists of all time—made me realize the impossible. Asians can be rock stars too!

Momo: Putting together this music issue was like a continuation of that moment. As we began to research story ideas, we found that Asian Americans are in every genre of music and have been making a difference for a long time. In this issue, we feature musicians who are making noise in everything from hip-hop (p.30) to the Asian Massive movement (p.24) to film musicals (p.56) to video game soundtracks (p.18).

We’re profiling these artists not just because they’re Asian Americans with an instrument in hand—that’s easy to find. (After all, many of us were forced to take piano or violin lessons). We’re featuring people who have impressed us with their talent and heart, like beatboxer Jugular (p.34), rap trio Notorious MSG (p.20), and graphic designer Keith Tamashiro (p.44). These are artists with a message.
So, listen. 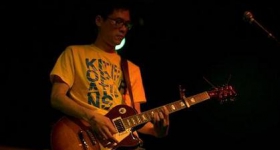