The Applied Rhyming of Apsci

LIKE A PERFECTLY matched vegemite and potato chip sandwich, the precision of opera singing meets the energy of garage rock, and hip-hop samples are laced with sharp rhymes in the sounds of New York-based ApSci. Vocalist Dana Diaz-Tutaan is one half of the international duo that forms ApSci's core, along with her Bronx-born husband MC Ra LaMotta. Hyphen caught up with this Aussie by way of the Philippines to discuss her theories, musical influences, and training, both formal (opera at age 10) and not-so-formal (disco moves at age three). With two releases under their belt, ApSci is now back in Oz working on their next record, to be released after "plenty of beaching and healthy eating" and applying the science of badassness in the studio.

What are you and your bandmates currently up to in Australia?

DANA DIAZ-TUTAAN: We're working on our next record for Quannum. It's been great being in the studio, setting up shop by the beach on a national reserve, taking our time with this record and letting ourselves soak in the clean air. It's been fantastic working on the record this way.

ApSci stands for Applied Science. What's behind the name?

At the time, we were surrounded by purists: It had to sound like hip-hop or "eh, it's not hip hop." Hip-hop beats are rooted in sampling, taking a bit of this and mixing it with a bit of that, and doing something new. I was tired of hearing the same old. Many were, and still are, trying to replicate that classic early '90s track. Applied Science was about wholeheartedly applying all the theories that you believe in, into everything you do-musically, day to day, or relationship-wise. Matching your theories to your practice.

What are your thoughts on being an Asian woman in a male-dominated hip-hop music industry?

I'm so used to it being the way it is that it's hard to think of it as anything else. However, you do see many minority women deeply rooted in the structure of the music business, and you realize how strong, determined and well-respected they are by both male and female peers. These women are a force to be reckoned with. They're kicking ass, and honestly, doing a better, more thorough job than the guys. As far as Asian women in the industry go, I know very few. I think it's fair to say that the whole Asian mentality of "work your ass off and have a secure job, so you can buy your nice home in the 'burbs and drive your nice car and have your financial nest egg for the four children you will raise in this God-blessed country" doesn't help encourage Asian women to pursue a career in the music industry.

How did you and LaMotta meet? Was it love at first sight?

We met in front of Baby Jupiter in the Lower East Side. It certainly was not love at first sight. He wasn't very interested in talking to me because he was having an argument with his ex-girlfriend. In New York, with a bunch of other Australian musicians, we all had the same friends. I kept bumping into Ra, thinking "Oh, this guy again . . ." Then he started asking about me and making the extra effort. After a few friendlier runins, he asked me out on a date.

What was the record label transition like going from Elefant Traks to Quannum Projects?

It was nice to finally be recognized, and have all your past and current efforts acknowledged. The Elefant Traks community believed in our music. It surprised me to see how they embraced us into their circle. It was the exact same for Quannum. Around '04, we were about to sign with another smaller label for US and European distribution, and the evening we were going to submit masters, we got a call from X [Quannum Projects artist Chief Xcel], saying he was interested in releasing our record worldwide with Quannum. He said he believed in our music, and wanted to help us get our music out there through whatever means he could. I feel so honored that artists I respect and admire have said straight up, "I wanna help you."

What excites you about the music you and your bandmates create?

Ra is a great producer, and he has an ear for things that are so unique and challenging, but at the same time work so well together. Like peanut butter and jelly. Who knew? Like vegemite and potato chips wedged between two slices of bread. OK, Americans don't get the vegemite thing, but really, it's not as bad as you think. I love that we can experiment with sounds and disciplines and give it that big "produced" feel. Nothing is halfhearted. That's the way I like it. For this next record, I love how our voices naturally balance each other out when it comes to our tones and our melodies. The guy actually has a great singing voice, which in this new record he's started to embrace. I love it.

Ra is constantly programming beats, working an idea, or singing something he's got in his head. He's really tapped into a creative pool, and if he's quiet, you can be sure he's got a new idea in there. I really buzz off a great beat. I've been programming some beats lately, but it's Ra's tracks that really spark me to come up with vocals that are like a call and response thing. Sometimes Ra will give me a beat that seems so "on," that I come up with something that's almost like a counter-melody to it. I mostly only need to hear something once or twice and I have my part. Ra listens to something over and over again and can write multiple parts, and ends up going with any given one. I don't know how he does it. I think it's my training that has me thinking more rigidly that "once it's written, it's written." It kinda sucks, but it's the way my mind works...

In your current album, Thanks for Asking, a listener might notice a vocal resemblance to Portishead's Beth Gibbons. Have you heard that comparison before?

When you're trying to describe an artist and their sound or style, it always helps to do the "sounds like_____ meets _____ " It's just the way it's always been. I don't mind being compared to other vocalists, as long as they're good ones! I've been compared to Beth Gibbons before, and it's an honor. In some of our earlier, more experimental tracks, someone called us "Portishead on crack," which we kinda dug, but since Portishead came out, I've heard so many female vocalists that are pretty much a straight rip-off of Beth Gibbons, singing over similar-style beats, which I don't get. It's like buying Tropical Fantasy Cola when you can afford Coke or Pepsi. Hopefully in the future, people will hear a new artist and say "they sound like ApSci meets..." It's about how long you choose to stay in the game and make your own mark.

Aki Feliz was bom and raised in New York City. She is part of a three-piece music ensemble that creates music for the simple love of it. 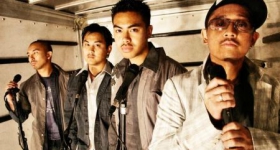 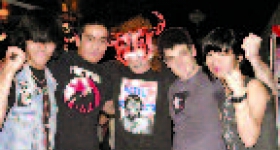 Pigs on a Tour