Star Trek adds another Asian American, but its reputation for diversity may be suspect.

SPACE ... the final frontier. These are the voyages for Asian Americans, who've boldly gone where they never have before-on five Star Trek TV shows and 10 movies. Star Trek is a pop culture phenomenon spanning more than 40 years and is considered groundbreaking for diverse casts that have always included Asian characters.

John Cho of Harold and Kumar fame carries forward the torch, or perhaps more appropriately, the phaser, taking over the role of Hikaru SuIu, originated by George Takei, in an 11th Star Trek movie scheduled to be released in May 2009. The movie is purported to be a prequel to the 1966-1969 television series that started it all.

"It meant a lot to me seeing George (Takei) on television," Cho says. "It was like, 'look at this guy who isn't wearing a coneshaped hat' and it was stunning. He was just alone on television as an Asian American. So when this project came along, I was very keen on doing it because it was a legacy I really wanted to be a part of." (Read a full interview with Cho in the Film section.)

Takei was one of the few Asian Americans with a starring role on TV when he played Sulu, helmsman of the Enterprise, in the first Star Trek series and in six movies.

"As a fan but also as a scholar of Asian American pop culture, I've always been impressed with the Star Trek franchise and its efforts toward inclusion," says Phil Yu, a self-professed Trekkie who also blogs as Angry Asian Man (www.angryasianman.com) and is a web producer for Yahoo Movies. "It presents a Utopian view of the future and has always included Asians on the ship."

The cast of The Original Series (TOS), which is what fans call the first iteration of Star Trek, also had a black female character (Uhura, played by Nichelle Nichols) and, at the height of the Cold War, a Russian character (Chekov, played by Walter Koenig). In later shows, there are Latino and Native American characters.

"The message of Star Trek was all about tolerance, and the diverse cast reflected that message," says Trekkie Susan Sun of San Francisco. "To have (Asian Americans) be part of such a mainstream show made me feel like the future is all about people who look like me ... I feel more connected to it."

The utopia envisioned by the producers of Star Trek is one in which humans, having survived an apocalyptic war, have overcome racism and prejudice to live peacefully with each other and, with the advent of interstellar space flight, species from other worlds. But not all is well in the United Federation of Planets if you look beyond the polyester Starfleet uniforms and prosthetic makeup.

"There are serious issues of racism, in an academic sense, and you can see how it plays out in how Asian men, black men and Asian women are represented," says Daniel Bernardi, author of Star Trek and History: Race-ing Toward a White Future. "Yes, you put some people of color on the show. Now that's good, but how did you use them and to what end?"

Bernardi, an associate professor and director of the Film and Media Studies program at Arizona State University, says he's a fan of Star Trek, but the show perpetuates white superiority and renders the non-white characters as sidekicks or servants.

"What Star Trek is really about is a future that is 'white', and white is really articulated as a metaphor for being human," Bernardi says. "We can all get along if humans-read white-are in charge, and we all try to be like them."

Other Asian American Trek series regulars were Garrett Wang as Ensign Harry Kirn in Star Trek: Voyager and Linda Park's turn as communications officer Hoshi Sato on Star Trek: Enterprise. Recurring Asian American cast members were Patti Yasutake as nurse Alyssa Ogawa in the Star Trek: The Next Generation and Rosalind Chao as botanist Keiko O'Brien (she marries a white character) in The Next Generation and Deep Space Nine. "They have service jobs that serve the interests of the white lead characters," Bernardi says of people of color in Star Trek. "Sulu is the classic Asian-male stereotype: His sexuality is not at all competitive with the white males."

Bernardi cites an episode of TOS in particular, "The Naked Time," in which an alien virus infects the Enterprise crew, causing them to act out their inhibitions. In one of his most celebrated scenes, Sulu goes on a shirtless rampage, molesting Uhura and challenging all comers with a fencing sword. "That's Star Trek revealing itself," Bernardi says. "That's what they think Sulu is inside, a threat to women and wild beast that needs to be tamed."

The producers of Star Trek realized they had a problem, according to Bernardi. "They had this reputation as being egalitarian and pioneers. Deep down, they knew they were perpetuating stereotypes." That's one of the reasons the Borg, a species of cybernetic beings that assimilate and destroy anything in their path, were introduced on The Next Generation, according to Bernardi. "They were critiquing assimilation and the series itself," he says.

Outside of Star Trek, not much has changed for Asian Americans on television since Takei first donned a yellow-polyester Starfleet uniform. Juicy roles for Asian American actors are few and far between. "Given the nature the rest of TV (Star Trek) is groundbreaking. It's iconoclastic and going against the grain in having people of color in the cast," Yu says. "It works toward the stated mission, that vision, so I would give them credit for it."

Sylvie Kim contributed to this story

Writer Harry Mok wants to join Starfleet. He is Hyphen's editor in chief. 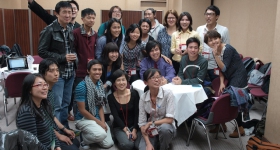